Foreign and Expatriates Minister Faysal Mikdad met UN Special Envoy for Syria, Geir Pedersen who briefed him on the efforts exerted in the context of facilitating the convening of the 6th round of the Committee for Discussing the Constitution, referring to the meetings and communications he has conducted recently in this regard.

For his part, Mikdad stressed that the committee has to work under Syrian leadership and ownership , and pave the way for its members to discuss issues related to the committee’s work without any foreign interference.

Foreign and Expatriates Minister, Faysal Mikdad, participated in the First Ministerial meeting of “the Group of Friends in Defense of the Charter of the United Nations” held on Thursday in the presence of Foreign Ministers of 18 countries.

Minister Mikdad referred to the challenges that encounter a number of member states, among them Syria, on top, the danger of terrorism which is backed some UN member states and the coercive unilateral measures in addition to attempts of intervention in domestic affairs in a flagrant violation of UN charter and international law.

On wednesday, Martin Griffiths, Under-Secretary-General for Humanitarian Affairs, visited the Permanent Mission of the Syrian Arab Republic to the United Nations, and discussed with Foreign and Expatriates Minister Dr.

UN General Assembly held on Wednesday a high-level meeting to celebrate the 20th anniversary of adopting the declaration and work plan of Durban on racial discrimination .

Deputy Foreign and Expatriates Minister, Bashar al-Jaafari said that Syria’s delegation welcomes convening this international conference which is considered as a remarkable event in the struggle to improve the lives of millions of people who are victims of discrimination and extremism all over the world.

Secretary-General of the United Nations, António Guterres, said in a speech before member states that there are six major divisions which require from the international community to bridge them, on top, the achievement of peace especially in light of conflicts the world has been recently witnessing, in addition to the climate change.

** We reaffirm that the embassies of the Syrian Arab Republic in Cuba, Brazil and Argentina are concerned with following up consular affairs of Syrian citizens residing in the United States and Canada.

Syrian embassies in Cuba, Brazil and Argentina have been assigned to follow up and complete the consular  matters of Syrian citizens residing in the United States and Canada...

The Syrian foreign ministry has, in correspondence to the United Nations, accused the US-led coalition of new atrocities against its civilians. 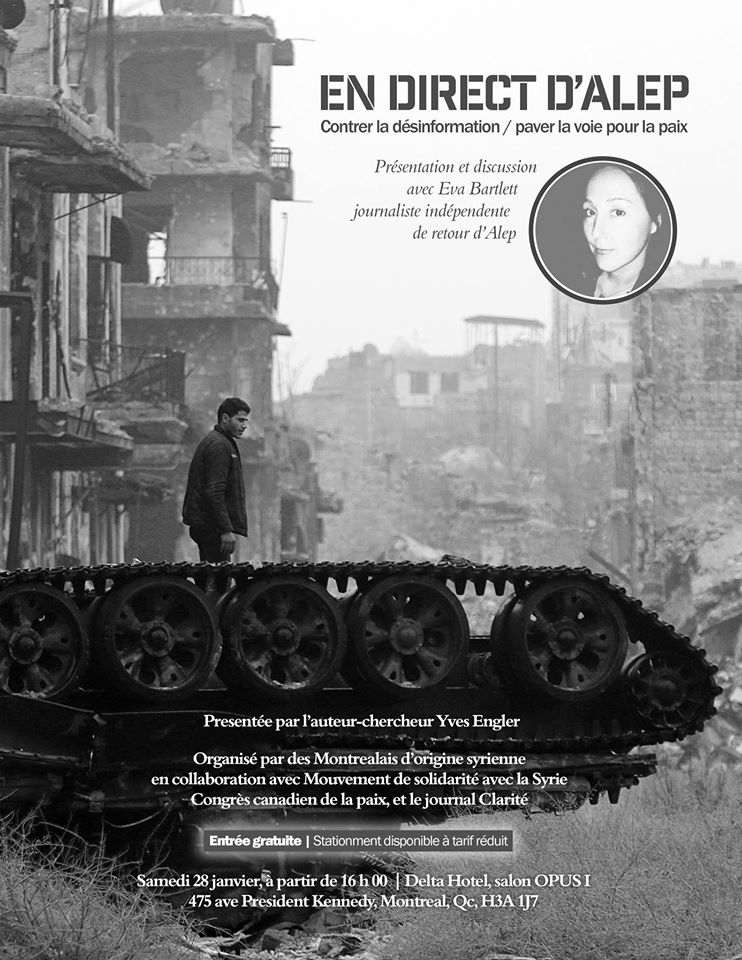 Eva Bartlett, the courageous independent Canadian journalist who has been exposing the lies and misinformation spread by Western imperialist governments and the mainstream corporate-controlled media about the ongoing conflict in Syria, will be in Canada for a speaking tour from 24-28 Jan 2017.

Hand Off Syria Coalition is planning a series of speaking events on Syria throughout USA during the month of December.  the keynote speaker for these events is Eva Bartlett, independent Canadian journalist who has done a significant amount of reporting from Syria and is directly coming from Aleppo to the U.S. to participate in our speaking tour.