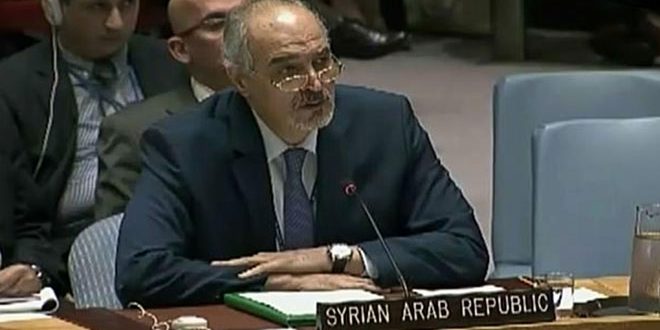 Syria’ Permanent Representative to the UN Bashar al-Jaafari said on Wednesday that the continued trafficking in the Syrian blood by representatives of “al-Golani” and ISIS, through the humanitarian file, will not affect Syria, with the support of its allies, to practice its legal duty in combating terrorism and saving the lives of its people in line with principles of the international law and the relevant UNSC resolutions on counterterrorism.

Al-Jaafari added in a speech at UNSC session on the state in the Middle East that liberating more than 80 thousand of children and women in Aleppo was not part of the British and French foreign ministries’ plans or the US Department of State’s which all allege they defend civilians in Aleppo.

He noted that these states’ calls to impose sanctions on Syria and Russia after the liberation of this number of civilians set another evidence on the exploitation of these Syrians by those who sponsor terrorism to protect terrorists and practice the cheap political blackmail.

Al-Jaafari  indicated that that once again, representatives of Jabhat al-Nusra terrorist organization and other groups affiliated to them, call for holding an urgent UNSC session in an attempt to offer political and moral support to these groups following the great achievements of the Syrian army and its allies.

Syria’s permanent representative referred to the dozens of civilians who tried to flee from the eastern parts of Aleppo city to the safe areas in the western neighborhoods and were killed at the hands of “moderate opposition” terrorists who are backed by the US, Britain and France.

Al-Jaafari read quotes from Syria children’s letter to UNICEF resident representative in Syria in protest of terrorist organizations’ attacks with rocket shells on Aleppo schools, “ We want to go to our schools without fear of car bombs.. We want to play without fear of mortar shells or explosive devices.. We want to live in peace, security and joy.. The blood of our friends who were martyred in different Syrian cities will not have been in vain, rather they will be a beacon for close victory on terrorism.

It seems that the UNICEF representative did not hear about this letter and Jabhat al-Nusra representatives inside and outside the UN Security Council did not listen to the tens of thousands of liberated civilians’ suffering stories and terrifying testimonies about the practices of Jabhat al-Nusra and affiliated terrorist groups in Aleppo over the past few years starting from selling humanitarian aid and bread to them, recruiting children, taking women captive and using them as human shields, Al-Jaafari added, noting that these are real stories and have nothing to do with stories from the Thousand and One Nights told by some states in this council.

Addressing the US permanent representative, Al-Jaafari said that ISIS, Jabat al-Nusra and other terrorist groups who have taken women captive, set a price list to sell them at the slave market according to their age.

The UN special envoy for Syria, Staffan de Mistura, and Stephen O’Brien, USG for Humanitarian Affairs at the UNSC did not use the word “terrorists” and used the expression “Non-state armed groups” when they talked about preventing civilians from leaving Aleppo eastern neighborhoods , stressing that this shows clearly that these terrorist groups take civilians as human shields, noted Al-Jaafari.

He referred to the absurdity of some parties in the UNSC through their misleading statements which go in line with the stances of their governments and their destructive schemes, noting that it will not delude the reality that the people of some eastern neighborhoods in Aleppo restored hope in life after they were liberated by the Syrian army and its allies who provided them with food, safe residence and good living conditions after four years of suffering and pain.

Al-Jaafari said that the “absurd theater” and its heroes of Jabhat al-Nusra representatives inside the UNSC failed to distort the military achievement in liberating the civilians of Aleppo from terrorists, not to mention their failure in defaming the image of the relief and humanitarian performance of the Syrian government, in cooperation with its allies and friends, in order to provide them with their basic needs.

Al-Jaafari said that “In this regard, the Syrian government submitted a request to the office of the UN Resident Representative in Damascus asking for taking part in relief efforts exerted by the government in order to alleviate the suffering of tens of thousands of Aleppo people, in addition to informing the UN resident representative in Aleppo to use the reserves at the UN warehouses in the city to meet the citizens’ basic needs,” noting that the UN resident representative will go to Aleppo on Thursday as the Syrian authorities approved it.

He hailed Russia’s efforts and support to Syria in its war on terrorism which extended to include the relief and humanitarian work, the latest of which is the Russian President Vladimir Putin’s order to the Ministries of Defense and Emergency Situations to send mobile hospitals to provide medical assistance to residents of Aleppo and residential areas near it, noting that these field  hospitals are real and not studios to fabricate heroic deeds such as of the so-called “White Helmets” terrorists founded by the British security consultant James Le Mesurier .

It is time that this “absurd theater” stop its practices which caused the unprecedented spread of  terrorism and terrified the international public opinion as it extended to almost all parts of the world, said Al-Jaafari, pointing out that these states have to realize that they cannot use terrorism to turn Aleppo in another Kandahar.

He slammed the stances of some countries that abandoned their responsibilities towards the implementation of  the UN Security Council’s relevant resolutions, particularly No. 2253, turning a blind eye to behaviors of some countries represented by extending unlimited financial and media support to the terrorists.

He criticized the Qatari Foreign Minister’s statements last Monday on his Sheikhdom’s  continued support to the terrorists and arming them in Syria even if the upcoming American administration stopped this support.

Al-Jaafari reiterated the call upon the Council’s member states who sympathize with the “genetically modified moderate terrorists” to bring back their brutal garbage which they have exported to Syria over the past five years and to take care of them if they want through establishing self-governing zones for them in their own cities in Europe, the US and other areas.

He reiterated the Syrian Government’s adherence to its policies which are built on balancing between the priority of combating terrorism as the main threat to security and stability in Syria, and seeking to find a political solution to the crisis based on the Syrian-Syrian dialogue under a Syrian leadership and without any foreign interference or any preconditions.

He indicated that the Syrian Government is still waiting the invitation of the UN Special Envoy to Syria to resume the Syrian dialogue which stopped since May 2016.

Al-Jaafari added that those who are invited today to the Security Council to estimate what is taking place in Aleppo have been hosted by each of London, Geneva and Amman while there has been no representative or deputy of the UN from Syria, indicating that this is a very dangerous gab as the UN representatives working in Damascus have been excluded from proposing their briefings to the Council.