Al-Jaafari: restoration of occupied Syrian Golan will remain a priority for Syria 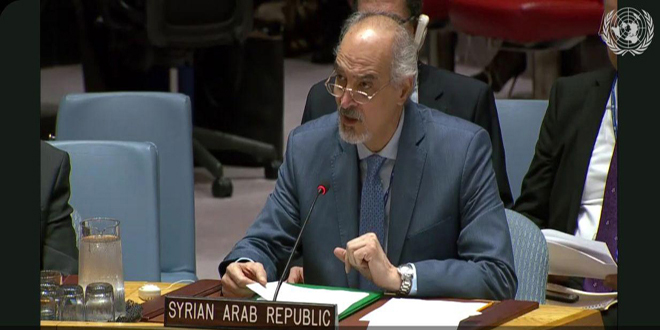 New York, SANA-Syria’s permanent representative to the UN, Dr. Bashar al-Jaafari, said on Monday that the occupied Golan is part and parcel of the Syrian Arab republic’s territories, adding that restoring it to the line of June 4th, 1967, with all means guaranteed by the international law, will remain a priority for Syria.

Al-Jaafari, during a security council session on the situation in the Middle East, added that some western states seek to dominate the UN and change it into a tool in the service of their agendas, based on hegemony and piracy.

He added that western states’ control on Security council made it fail to impose the implementation of its resolutions related to ending the Israeli occupation of the Arab lands in Palestine, Syrian Golan and south Lebanon.

Al-Jaafari stressed that Syria is astonished that UN envoy for the Middle East Nicolay Mladenov  ignores, in his briefs, what the Israeli occupation does of practices against citizens of the occupied Syrian Golan.

He affirmed that the Israeli occupation authorities try to change the demographic feature and the Syrian national identity in the occupied Syrian Golan, loot its antiquities, resources and capture its lands.

Al-Jaafari held the states that support the Israeli occupation entity responsible for the repercussions of what this entity does of crimes and violations in the occupied Arab lands.

“Syria renews its firm stance in support of the Palestinian people’s right of self-determination, establish their independent states with Jerusalem as its capital and the right of refugees to return Home,” al-Jaafari added.