Al-Jaafari: the constitution is an absolute Syrian sovereign affair 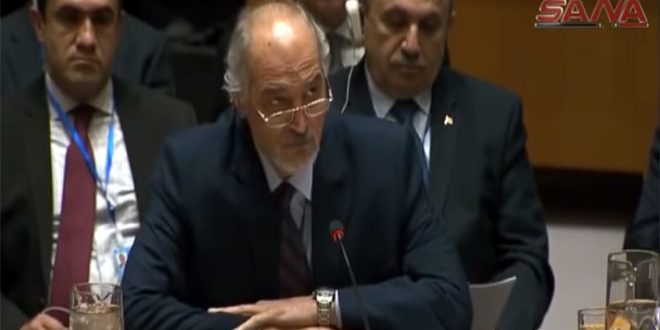 New York, SANA- Syria’s permanent representative to the UN, Dr. Bashar al-Jaafari said Thursday that Syria is open to any initiatives that help it come out of the crisis, affirming that the constitution is an absolute Syrian sovereign issue.

Al-Jaafari, speaking at a UNSC session on the state in the Middle East, added that Syria is ready to actively participate in any genuine effort to reach a political solution through which the Syrians alone decide their future without any foreign intervention.

He affirmed that the international community has to help Syria end the terrorist war and eliminate the remnants of the terrorist organizations, adding that Syria is writing the last chapter of its fight against terrorism.

Al-Jaafari went on to say that the success of any political track in Syria requires work with the Syrian state and pre-cooperation with it, saying that it also requires an international commitment to overcome the remnants of terrorists  and end the illegitimate presence of foreign troops  on the Syrian territories.

The Syrian diplomat affirmed that Syria hopes the current committee on discussing the constitution, emerging from the Syrian-Syrian national dialogue congress in Sochi, would be formed as soon as possible.

Al-Jaafari said Syria welcomes the role of the UN special envoy as a facilitator to the works of the Committee, and its assertion-at the same time-that no one can appoint himself as a third side in this process.

He said that western states claim their commitment to Syria sovereignty, independence and territorial integrity while they launch aggression on it and attack parts of its territories, as well as they still support terrorists.

Al-Jaafari affirmed that the constitution and any related issue is a sovereign affair which is decided by the Syrians without any external intervention, adding it is not permissible to impose any preconditions or conclusions regarding the task of the committee on discussing the constitution.

“Syria is determined to achieve the political solution through a Syria-Syrian dialogue, led by Syria, without any foreign intervention.. and combating terrorism should have the priority in all phases and developments of the political process,” al-Jaafari said.

He added that all the honest Syrians are called to take part in the political process, based on national bases in order to go ahead in reconstructing what has been sabotaged by terrorism.