Sri Lanka co-hosts Coastline Erosion side event at the UN

A side event entitled “Coastline Erosion and its Contribution to Climate Change” co-hosted by the Permanent Mission of Sri Lanka to the United Nations was held yesterday (20/01) at the UN Headquarters with the participation of a large number of Permanent Representatives, senior diplomats and members of the civil society. 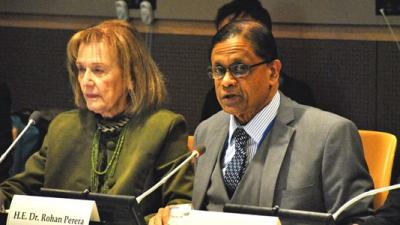 The side event, organized with a view to creating awareness on the issue of coastal erosion and its impacts on climate change was also co-sponsored by the UN Office of the High Representative for the Least Developed Countries, Land Locked Developing Countries and Small Island Developing States (UN-OHRLLS) and the NGO Sustainability, a non-governmental organization on Climate Change and Sustainability issues. 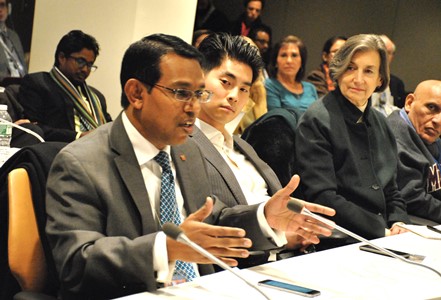 Ambassador Ahmed Sareer, Permanent Representative of Maldives and Chair of the Alliance of Small Island States (AOSIS)
making an intervention on the issue of coastline erosion and climate change, and its impact on Small Island Developing States.

In his welcome statement, Ambassador Perera remarked that it is extremely timely to focus on coastline erosion, a problem that is common to every country with a coastline, and its impact on climate change, particularly in the context of the recently concluded Paris Agreement on Climate Change and the 2030 Agenda for Sustainable Development.

He said that coastal erosion is a global phenomenon that poses grave environmental and economic challenges to the countries, in particular to Developing Coastal States. He further stated that loss of land, threats to coastal ecosystems and the impact on climate change are only a few of them. Small Island Developing States are particularly vulnerable to these challenges, accentuated by rising sea levels due to global warming, Ambassador Perera added.

He reiterated that though Sri Lanka is not considered a Small Island State, the challenges posed by coastal erosion are nonetheless felt severely.

Mr. Gregory J. Sarno, President of the Coastline Recovery Foundation made a presentation on coastal erosion and climate change, and the new technologies available to mitigate the effects of coastal erosion.

The discussion that followed the statements and the presentation, focused on the gravity of the issue and shed light on the various high technological as well as low-cost traditional options available to face the challenges posed by coastline erosion.

Many Permanent Representatives and diplomats expressed their appreciation to Sri Lanka for taking this initiative.