The International Day of Vesak was celebrated in New York on 17th May 2019 with an almsgiving to priests at the Permanent Mission of Sri Lanka to the United Nations and an official celebration at the General Assembly of the United Nations Headquarters in New York. The events were co-hosted by the Permanent Missions of Sri Lanka and Thailand - the principle co-sponsors of the UNGA resolution 54/115, which recognized the Day of Vesak internationally and at the United Nations, together with other Buddhist countries and co-sponsors of the resolution.

The celebration commenced on 17th May morning at the Permanent Mission of Sri Lanka to the United Nations with an almsgiving to over 40 Buddhist priests from Sri Lanka, Thailand, Myanmar, Japan, Cambodia, Nepal, Bangladesh, Mongolia and Laos.  The Permanent Representatives of Sri Lanka and Thailand were joined by the Permanent Representatives of India, Nepal, Laos and Cambodia and senior diplomats and staff from the Permanent Missions of Bhutan, Nepal, India, Bangladesh, Japan, Thailand, Myanmar, Cambodia and Laos among others. Ven. Heenbunne Kondanna thero, Chief Incumbent of the Staten Island Buddhist Vihara and Ven. Nakagaki, Founder and President of the Heiwa Peace and Reconciliation Foundation of New York conducted the ceremony in the Theravada and Mahayana traditions respectively and invoked blessings on the departed, including those who tragically lost their lives at the Easter Sunday attacks in Sri Lanka.

An official event to mark the International Day of Vesak, co-chaired by Ambassador Dr. Rohan Perera of Sri Lanka and Ambassador Vitavas Srivihok of Thailand, was held at the United Nations General Assembly hall on 17th May evening. A large number of Buddhist monks, the President of the General Assembly H.E.Ms. Maria Fernanda Espinoza Garces, the Chef de Cabinet of the UN Secretary-General H.E. Ms. Maria Luisa Ribeiro Viotti, Permanent Representatives of Member States, diplomats and UN officials and members of Diaspora communities of different countries participated at the event.

Ambassador Vitavas Srivihok, Permanent Representative of Thailand, in his opening remarks, emphasized the importance of the day of Vesak. Addressing the gathering, scholar monk Ven. Bhikku Bodhi, drew upon the Burning House parable in the “Lotus sutta” and highlighted the importance of focusing on the realities of the present, especially those that threaten us.  He stated that turning a blind eye to such danger, could ultimately lead to destruction, with particular relevance to threats such as climate change. The President of the General Assembly, in her brief address, highlighted the enduring message of peace encapsulated in the teachings of the Buddha and its relevance to humanity in today’s context of increasing terrorism and violent extremism.  In this context, she made reference to the solemn commemoration held in the General Assembly for the victims of the Easter Sunday attacks in Sri Lanka.  Representing the Secretary General of the United Nations, the Chef de Cabinet Ms. Viotti spoke of tolerance and non violence advocated by the Buddha and the importance of these concepts towards promoting peace in today’s world. Permanent Representatives and senior diplomats from seventeen countries made statements regarding the celebration of Vesak in their respective countries and the relevance of the Buddha’s teachings in today’s world.

The event also included the performance of a devotional song “Aba Mitak” by Visharada Shalika Aroshini, which referred to the story of Patachara and the instrumental rendition of the popular song “Buddan Saranang Gachchami” by the students of the New York Buddhist Vihara Dhamma School.

The event concluded with the closing remarks by H.E. Dr. Rohan Perera, Permanent Representative of Sri Lanka to the United Nations who thanked the Members of the Maha Sangha and representatives of Permanent Missions who contributed to the success of this event.  Speaking of the horrific and barbaric attack that took place in Sri Lanka on Easter Sunday, he called upon the United Nations and the international community not to be deterred by such violence but to strengthen their resolve “to maintain peace within and among nations.” He concluded the event by reflecting upon the Buddha’s emphasis on “samma ditti” or right views, stating that the root cause for the violence and hatred in today’s world was caused by wrong views and that the “disarmament of the mind remains key to world peace.” 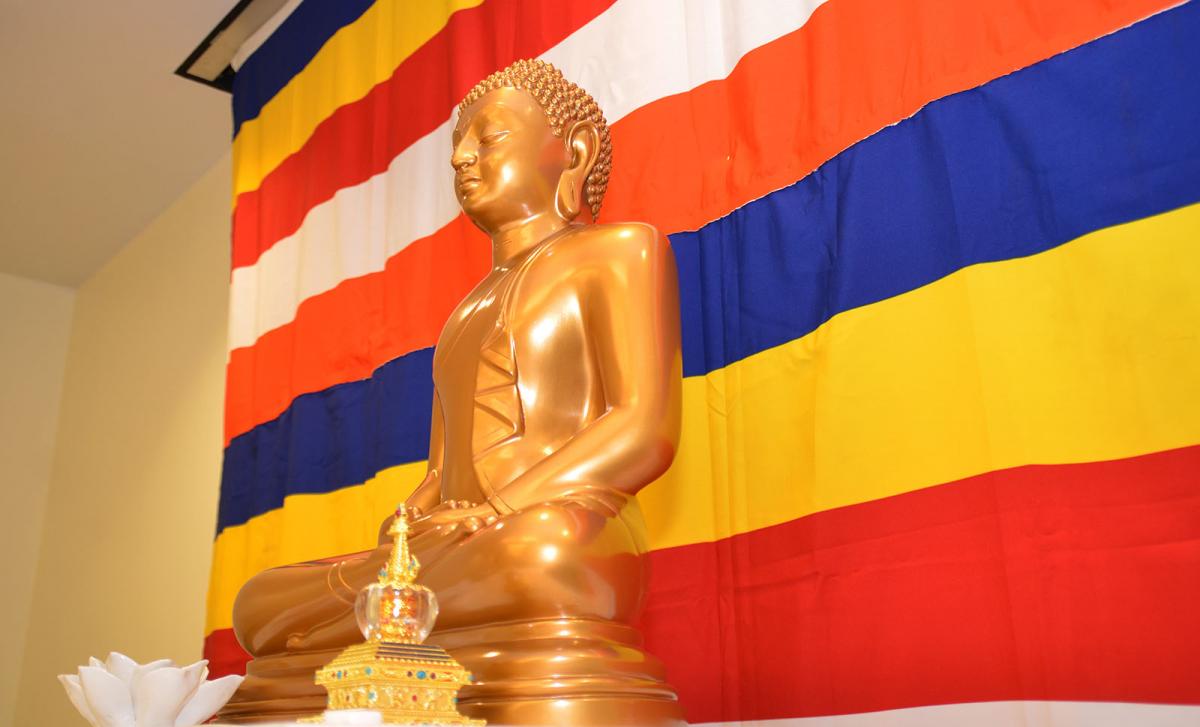 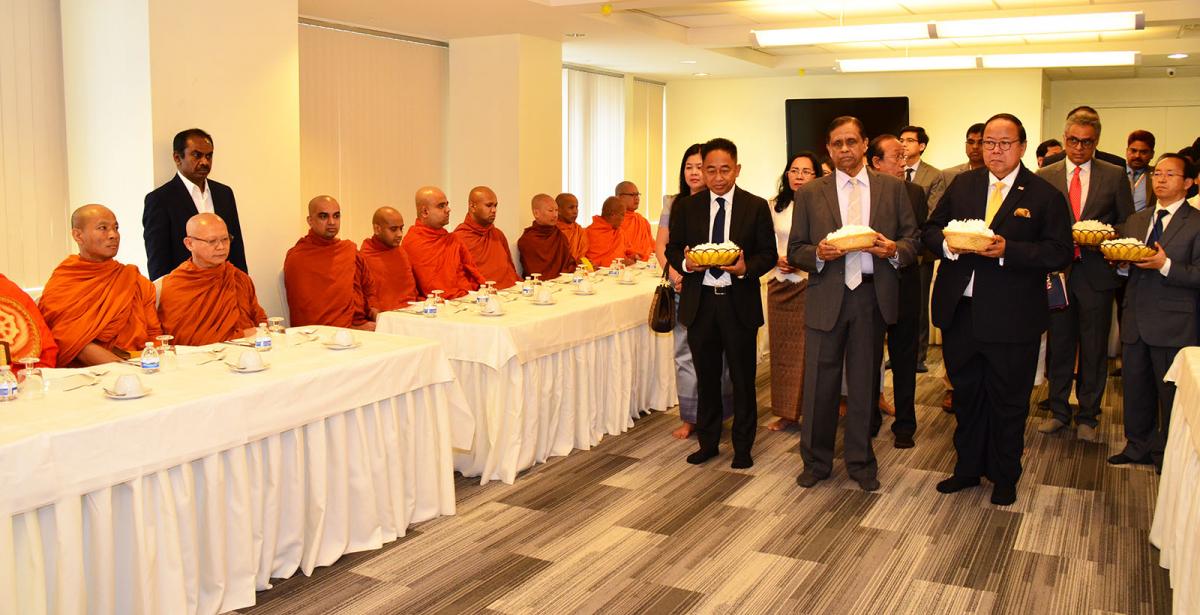 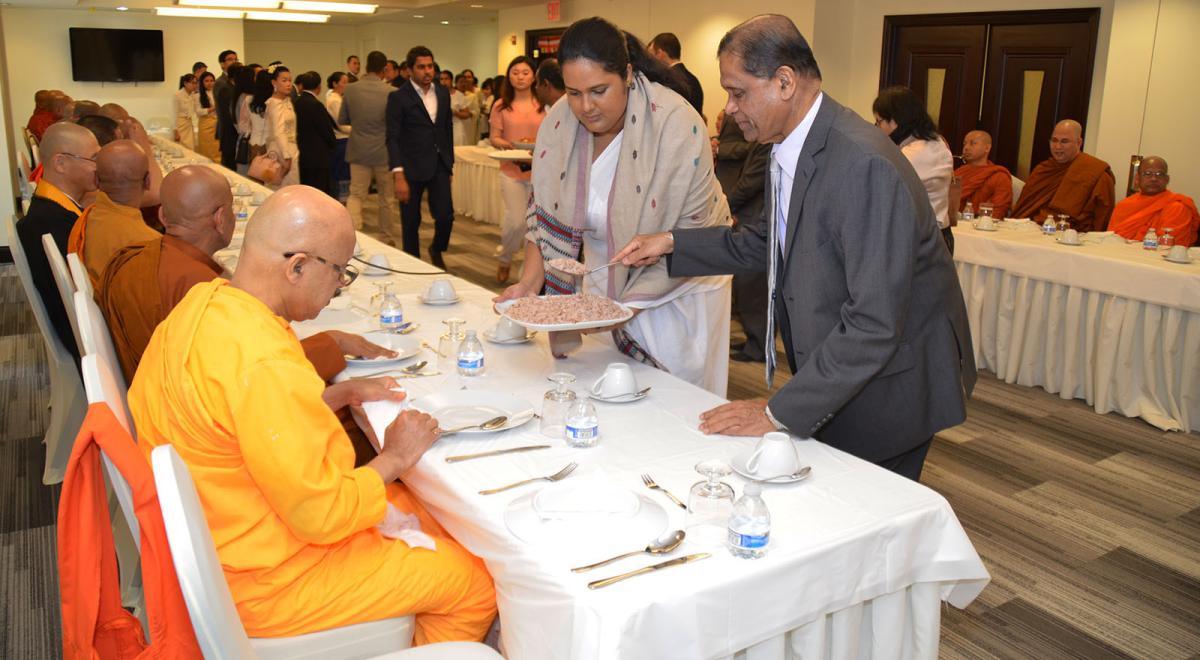 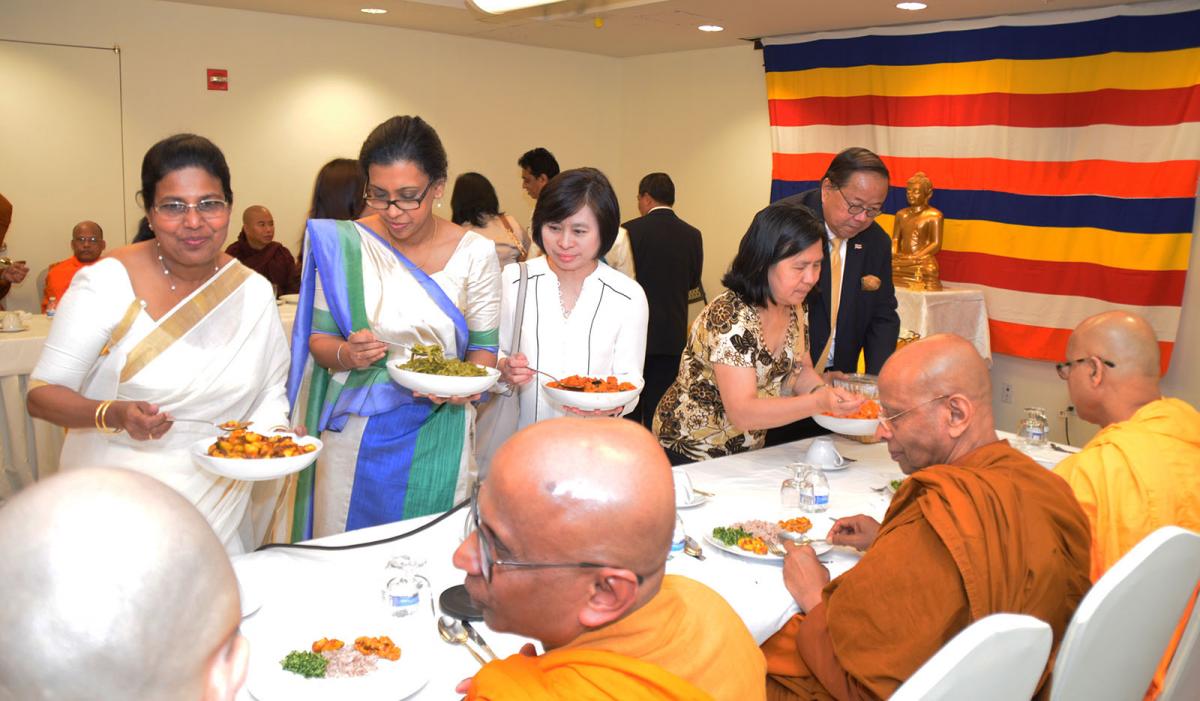 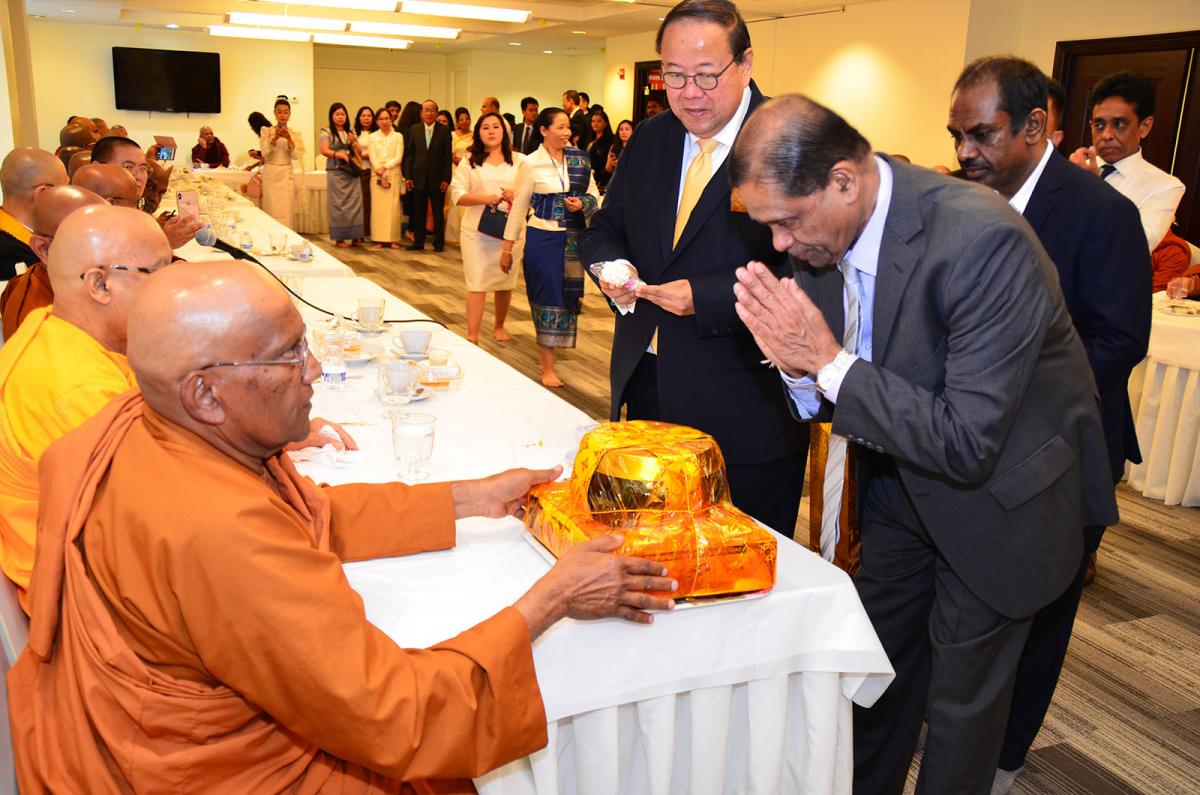 The Permanent Representatives of Sri Lanka and Thailand presenting the "ata pirikara". 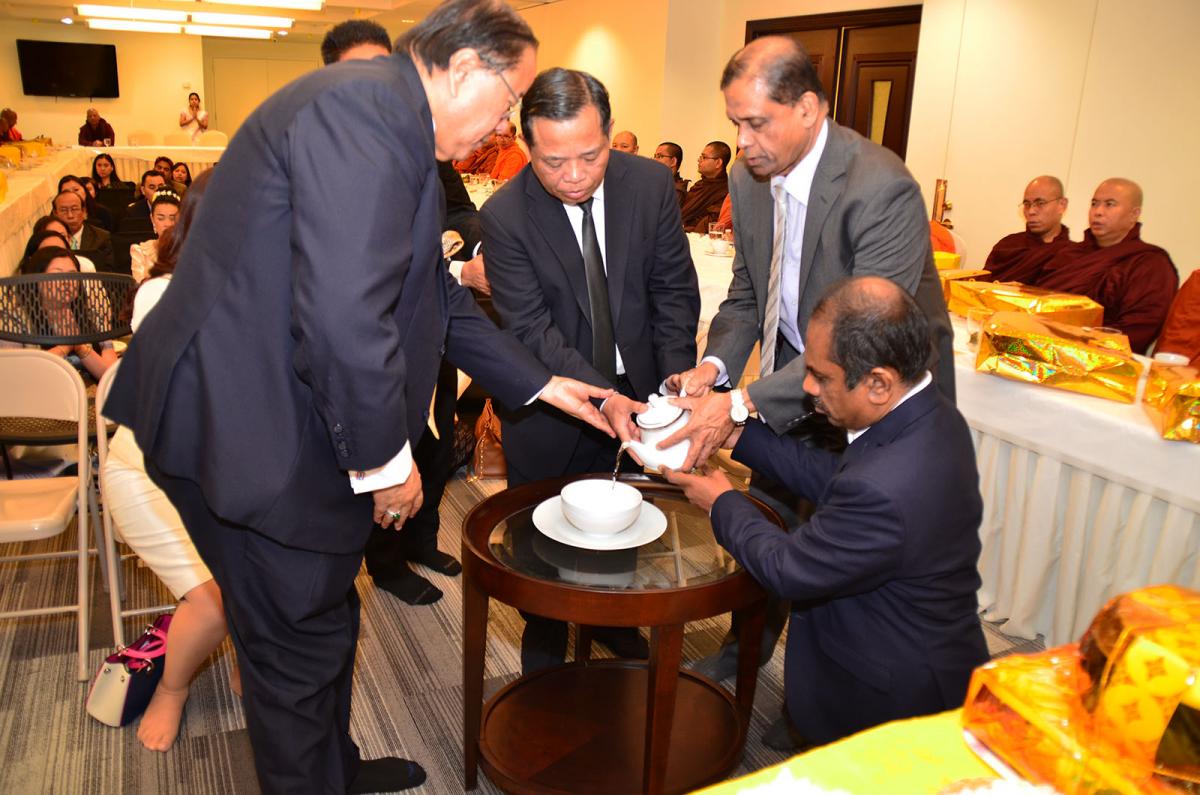 The Permanent Representatives of Sri Lanka, Thailand, India, Nepal, Laos and Cambodia participating in "pen wedeema" to invoke blessings on the departed 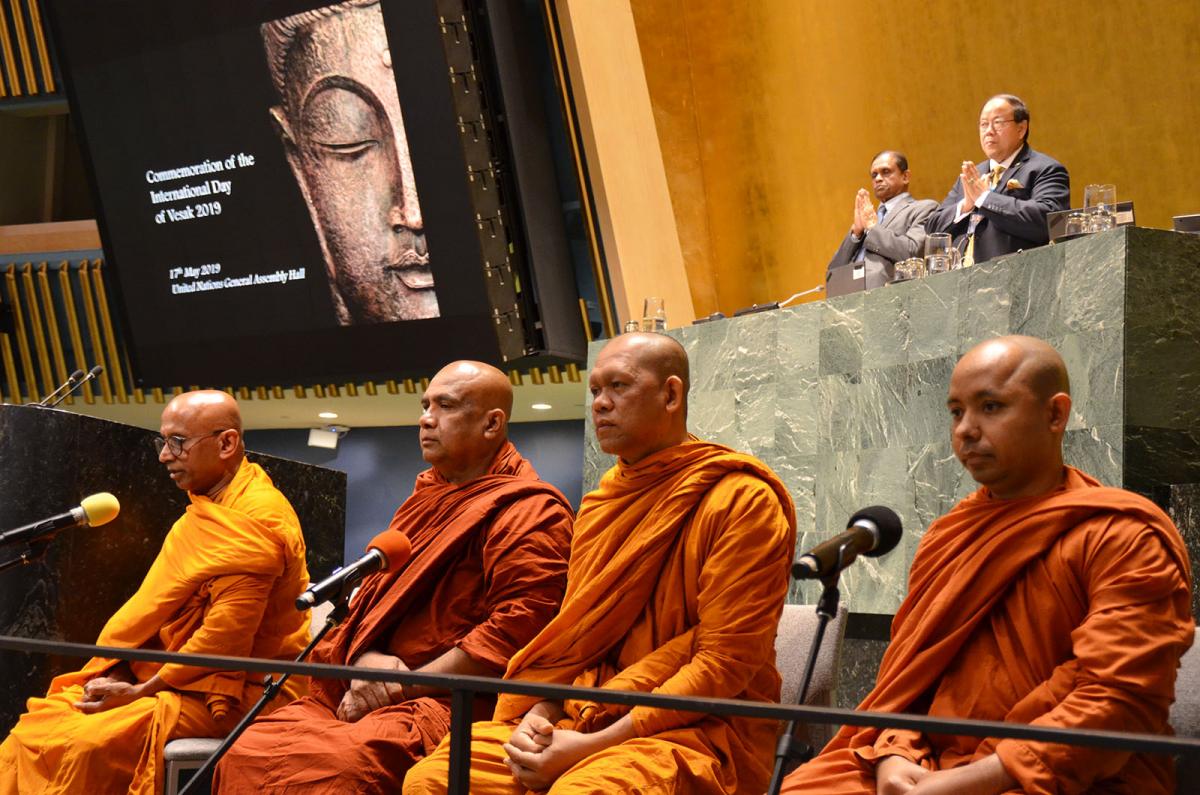 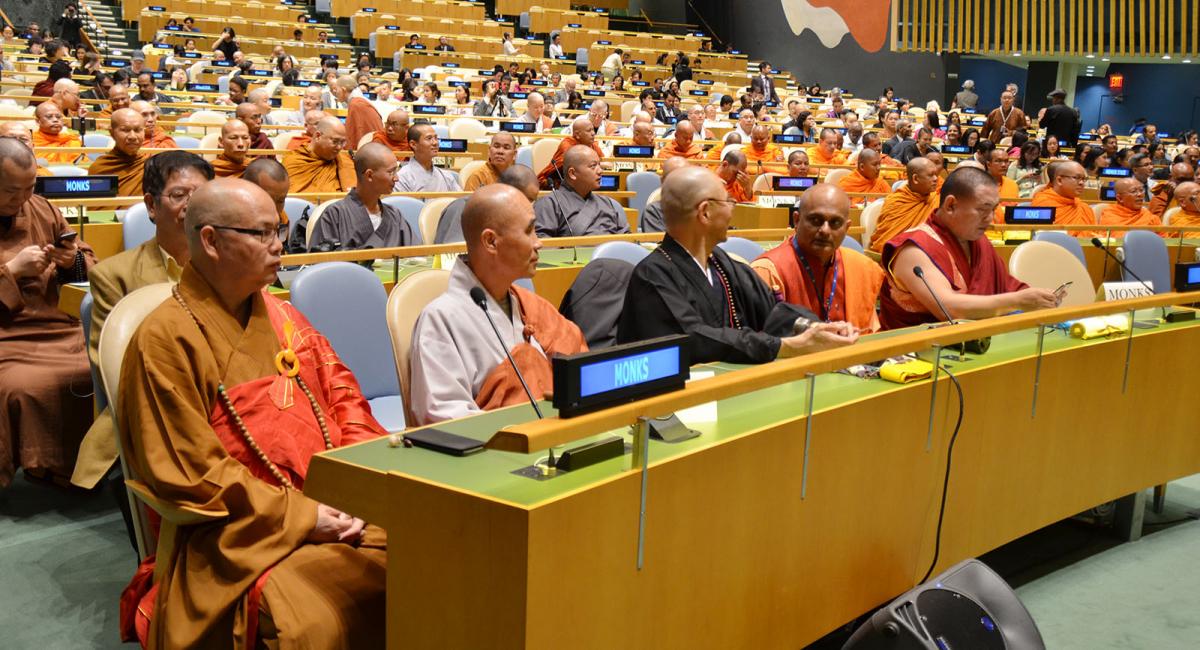 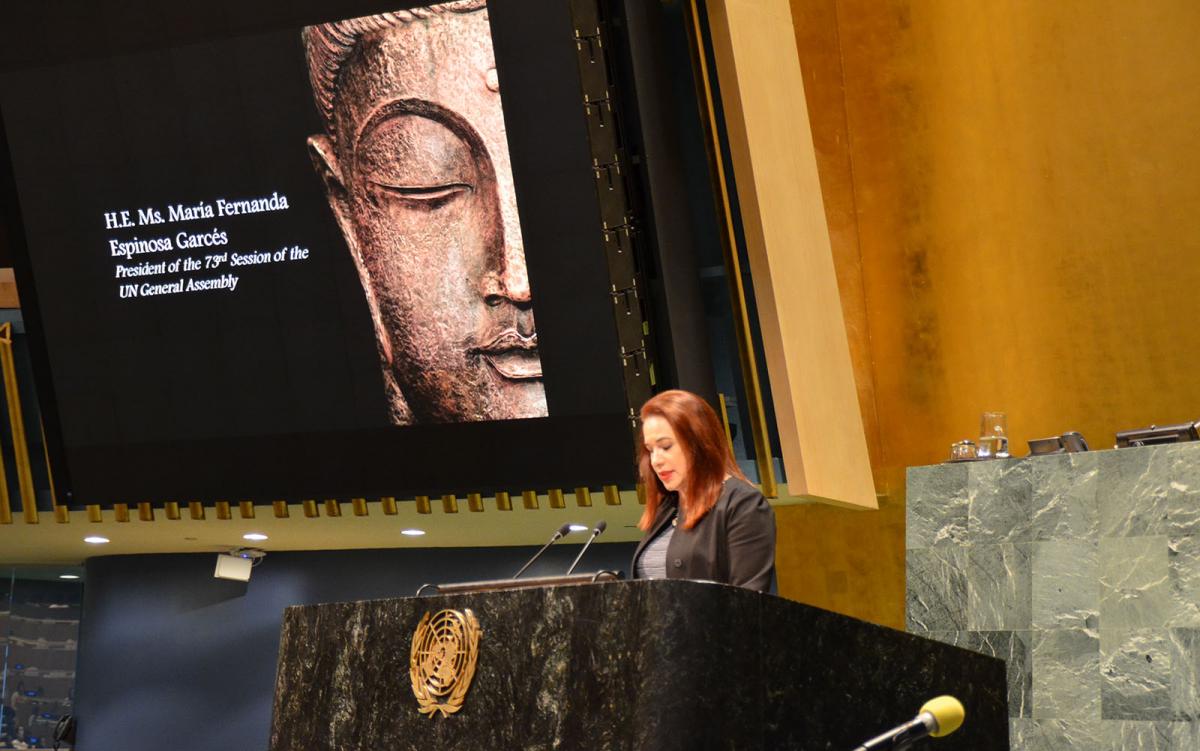 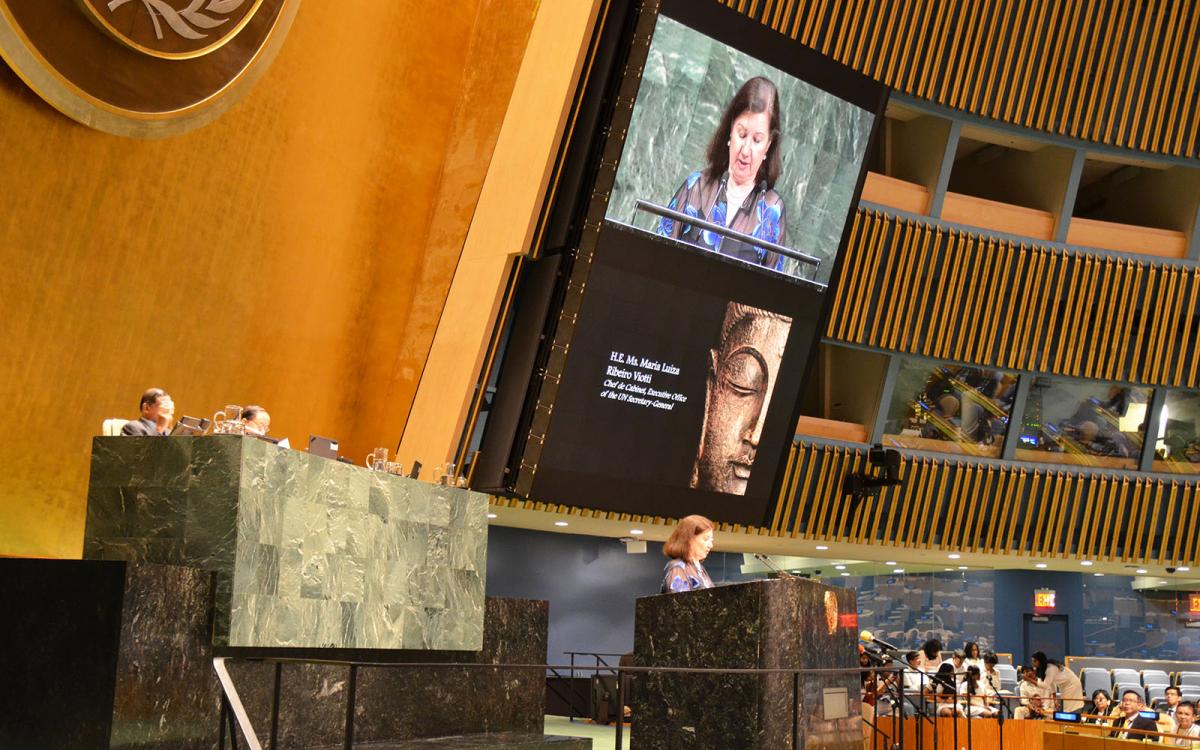 Ms. Maria Luisa Ribeiro Viotti, Chef de Cabinet of the UN Secretary-General, addressing the participants at the International Day of Vesak at the UN General Assembly 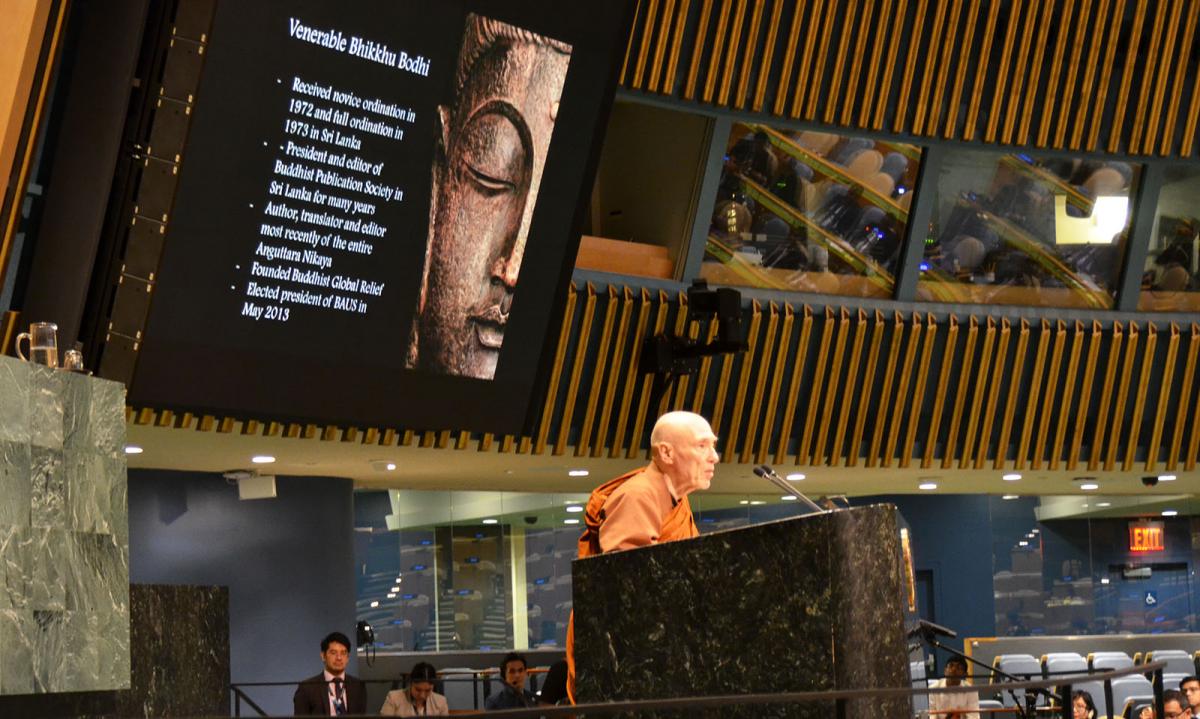 Ven. Bhikku Bodhi addressing the gathering at the International Day of Vesak at the United Nations General Assembly 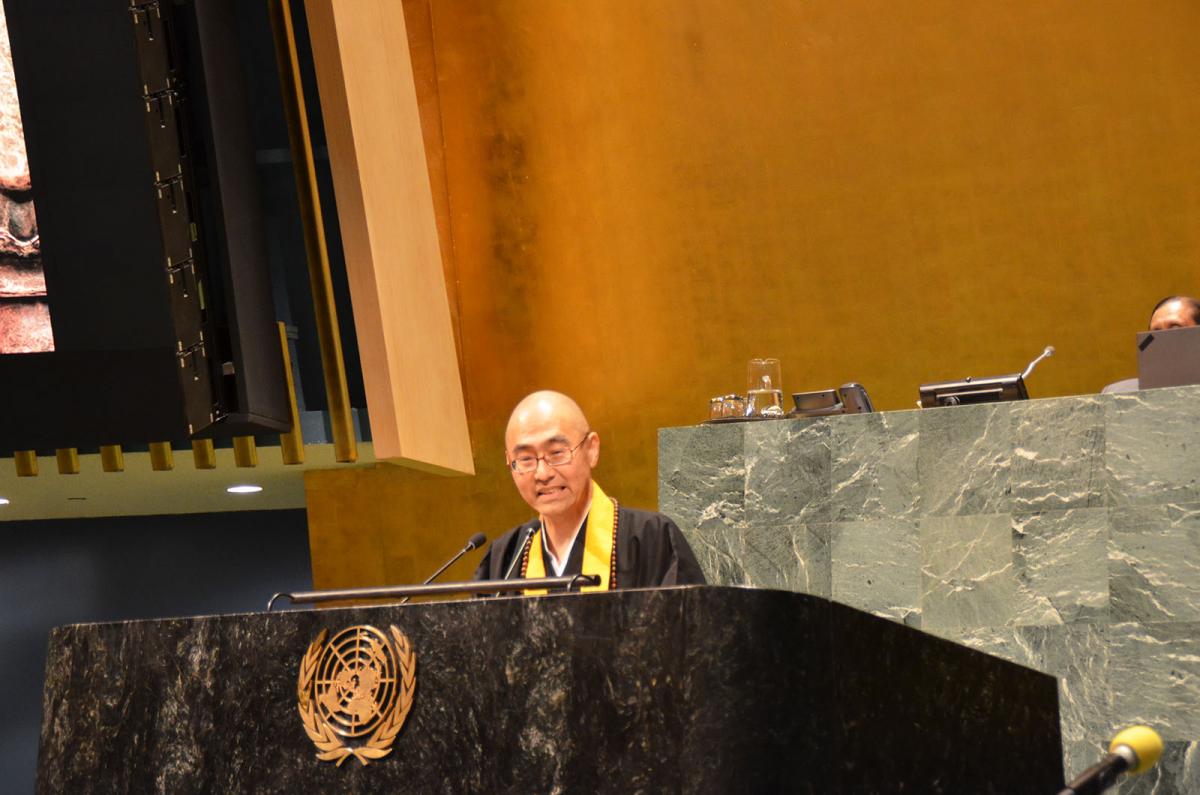 Rev. Dr. T. Nakagaki addressing the participants on the mahayana traditions at the International Day of Vesak at the United Nations 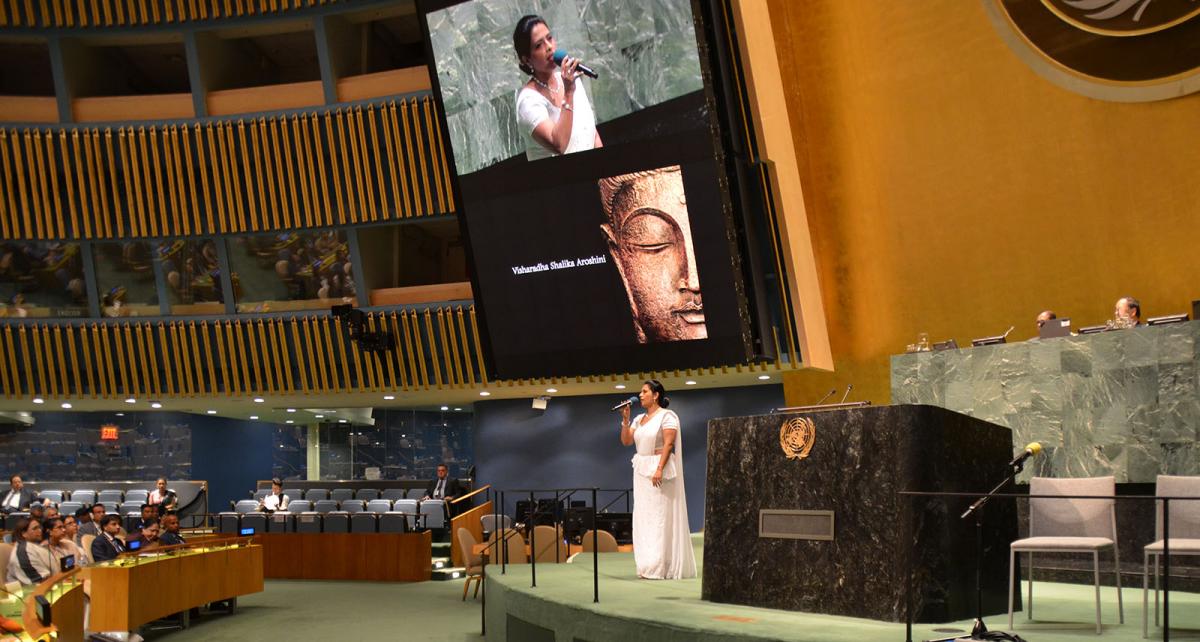 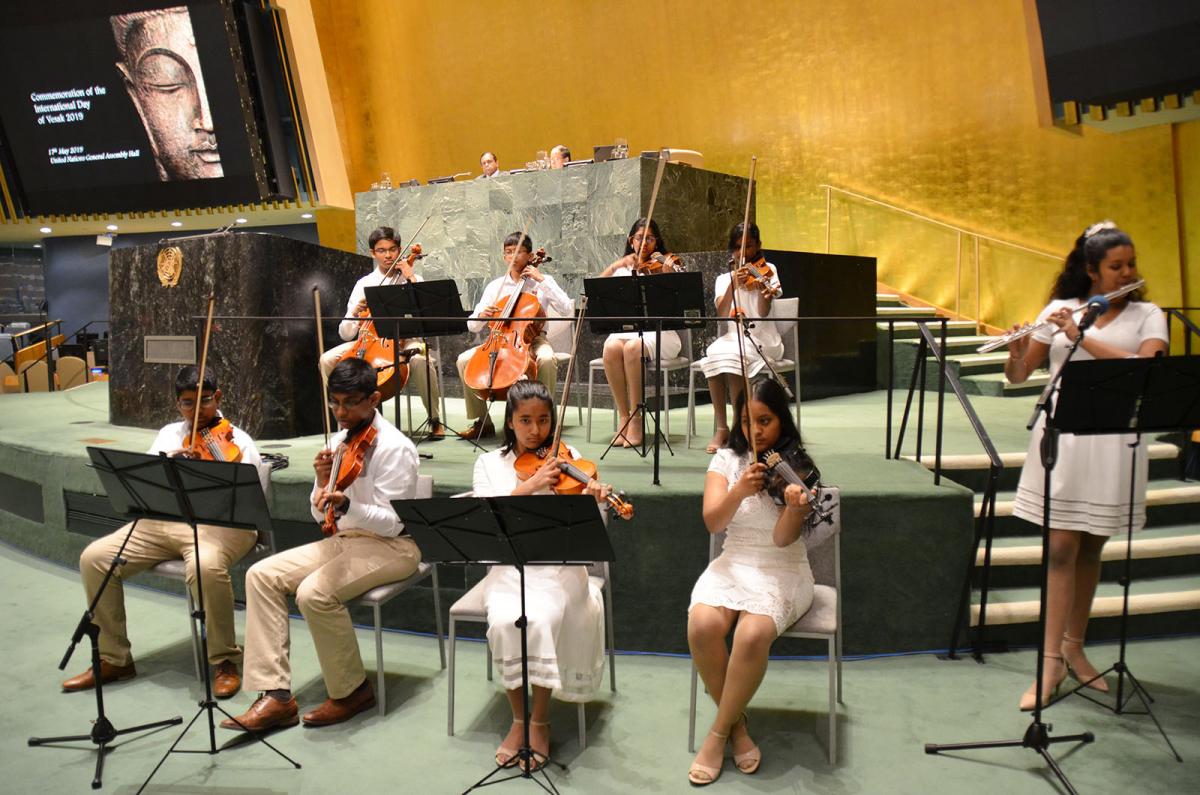