Statement by Mrs. Sonali Samarasinghe, Minister, before the Fourth Committee on the Comprehensive Review of the Whole Question of Peacekeeping Operations in all Their Aspects, 31 Oct 2018 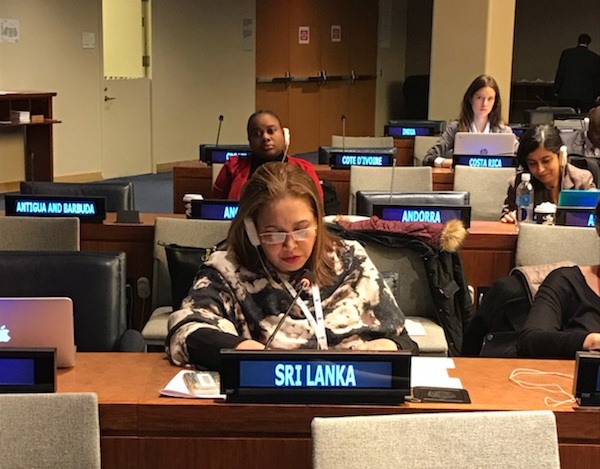 Sri Lanka aligns itself with the statement delivered by the Kingdom of Morocco on behalf of the Non Aligned Movement.

We welcome the Secretary General’s reforms of the peace and security architecture aimed at simplicity, clarity and efficiency, and the Secretary General’s Action for Peacekeeping Initiative (A4P) focused on a durable peace, and launched during high-level week this September. As a TCC and PCC, Sri Lanka was pleased to endorse the A4P Declaration of shared commitments and remains assured, it would revitalize our collective efforts in making peacekeeping operations effective, coherent, and in line with the United Nation’s other priorities such as human rights, peacebuilding and sustainable development.

It is essential, given the political, economic and social complexities of contemporary peacekeeping operations that the Department of Political Affairs (DPA) remains engaged at all times. Peacekeeping, to be fully effective, must be accompanied by political will and support on the ground. If we are to focus on a durable peace it is vital that there is cooperation and coordination between the United Nation’s peacebuilding architecture, UNSC Resolutions relating to international peace and security including women peace and security, and, peacekeeping operations.

As Sri Lanka seeks to expand its presence within the United Nations Peace keeping Missions, we acknowledge the dedicated work done by the staff of the DPKO and DFS, and extend our thanks for their continued and consistent cooperation and support.

Today, this most visible of activities of the UN faces multi-dimensional challenges in a constantly changing landscape. Peacekeepers are being deployed in increasingly dangerous environments. To address these new challenges our peacekeeping operations must adapt and acquire specialized capabilities.

Additionally, we would like to make the following points.

(1) We should take cognizance of the root causes of instability and conflict, and build local information networks, and effective intelligence gathering networks, to better protect civilians and noncombatants. Recognizing the primacy of politics, peacekeeping operations must be deployed in support of active diplomatic efforts and not instead of them.

(2) Establishing the Rule of Law is fundamental to achieving a durable peace in the aftermath of conflict. Peacekeeping operations and many special political missions, must have adequate provisions to work with the host country to strengthen the rule of law, rebuild institutions and train personnel.

(3) The images of the untold suffering of children in conflict especially as we have seen recently, is more than humanity should have to bear.  Therefore the protection of children must be at the very heart of all our efforts.

(4)The country receiving the peacekeepers should have and indeed take ownership of the process when possible. There should be clear emphasis in their plans on building national institutions, strengthening national security structures, and addressing issues of restorative justice and reconciliation; if peace is to be sustained.

(5) It is vital that women are included at all levels of peacekeeping and peacebuilding. It is well known that women and men experience conflict differently and as a result understand peace differently. Women are received differently by the local population and are often successful in building relationships within local communities. An increase of women in peacekeeping could also serve as a catalytic means of solving the pernicious problem of Sexual Exploitation and Abuse.

Sri Lanka has demonstrated its wholehearted commitment to the elimination of SEA. We were one of the first countries to sign the Secretary General’s Voluntary Compact on eliminating Sexual Exploitation and abuse. We have joined the Secretary General’s Circle of Leadership; and made contributions to the Trust Fund to help victims of Sexual Exploitation and abuse. Sri Lanka also endorsed the Collective Statement which was issued by the Secretary-General and the Members of his Circle of Leadership on the margins of the seventy-third session of the General Assembly.

In this regard we have also adopted several best practices including a stringent vetting procedure for selecting peacekeeping troops with the involvement of the Office of the High Commissioner for Human Rights and the Independent National Human Rights Commission.

Sri Lanka’s commitment to increase its contribution to UN peacekeeping is sincere. We are committed to ensuring the best possible training and assessment of peacekeepers in Sri Lanka to uphold the highest standards of peacekeeping. Sri Lanka has considerable experience in combating violent unruly elements, and providing humanitarian assistance and disaster relief, and our troops possess excellent operational experience and expertise, that could be put to good use in UN peacekeeping and peacebuilding efforts. Sri Lankan peacekeepers have worked in difficult terrain and have acquired multiple skills while facing complex situations.

We have also expressed our commitment to deploying government provided personnel (GPP) in field Missions.

We acknowledge and welcome the fact that in the last two decades, disarmament, demobilization and reintegration of ex combatants (DDR) has become an integral part of post-conflict peace consolidation, and woven into the mandates of peacekeeping operations. Sri Lanka, having emerged from a thirty year conflict is well aware of the importance of DDR to stabilize conflict ridden societies in the short term, and to encourage development in the long-term.

Finally Mr. Chairperson, over the years, hundreds of thousands of military personnel, as well as tens of thousands of UN police and other civilians from more than 120 countries, have participated in UN peacekeeping operations.

Many have paid the ultimate sacrifice while serving under the UN flag. Sri Lanka pays the highest tribute to them, and with grateful thanks and humility, recognize and commend their achievements.