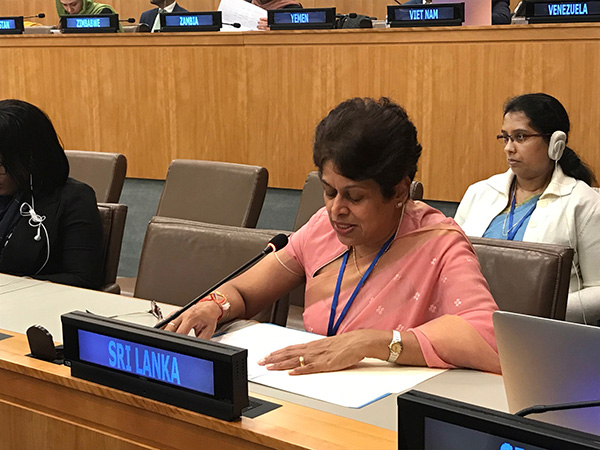 As stated in the Secretary-General’s report A/74/312, eighteen  years  after  the  World  Conference  against  Racism,  Racial Discrimination,  Xenophobia  and  Related  Intolerance  held  in  Durban,  South Africa,  in  2001,  these scourges continue to remain that too at exacerbated levels, requiring concerted efforts globally to address the related issues. Sri Lanka is deeply concerned by the spread of extremist movements, in many parts of the world, be they racist, xenophobic or sheer intolerance, and therefore calls for the promotion of tolerance and respect for diversity.

While recognizing that vital steps have been taken by the global community towards grappling with these menaces, it is more than evident that millions of people continue to be their victims. The deliberate triggering of discrimination, hostility and violence by hate speech has put democratic values, social stability and peace in complete disarray, thus challenging world order. These ideologies are enabled and amplified exponentially by digital technology, as  we  sadly  witness  the increasing  misuse  of  social  media  and  other internet  platforms  to  spread  the  messages  of hatred and intolerance by the misguided. This segment in the global population, now only seems to be rapidly expanding, and therefore, prescriptions need to be applied to arrest this abhorrent situations worsening. Identifying the causes for this phenomenon is therefore important.

On 21 April this year, Easter Sunday, the peace that Sri Lankans enjoyed since the eradication of terrorism in 2009 was shattered by the heinous terrorist attack that took the lives of over 250 people and injured hundreds more. Churches and hotels were targeted on one of the holiest days for Christians, by members of a home grown organization styled by the misplaced doctrine of ISIS. This clearly was a challenge to the pluralistic society in Sri Lanka. However, despite the attempts by the terrorists to destroy the country’s social fabric, the rich experience of being a multi-ethnic, multi-cultural and multi-religious country shaped by the teachings and faiths of Buddhism, Hinduism, Islam and Christianity, demonstrated the strength that religion and culture practiced in their pure forms, could play to promote understanding, harmony and trust among the population.

Terrorism cannot and should not be associated with any religion or belief. We strongly condemn violent extremism and terrorism in all its forms and manifestations, including the targeting of individuals on the basis of religion or belief. The horrific incidents witnessed lately across the world, remind us that the bane of radicalization, extremism and terrorism surpasses the boundaries of any one region, and poses a serious threat to international peace and security.  States must reaffirm their resolve in all honesty, to fight these global menaces, and work in collaboration with unsurpassed determination to defeat these challenges to human dignity and security. In this context, the UN Strategy on Hate Speech initiated by the Secretary General is welcome and incumbent on us Member States to tackle the conditions conducive to their spread.

In efforts to mitigate these deadly acts, a more comprehensive approach which encompasses not only ongoing,  security-based  counter-terrorism  measures,  but  also systematic  preventive  remedies,  that  directly  address  the  drivers  of  violent extremism, are essential. Education has a central role in creating new values and attitudes and provides us with important tools for addressing discrimination. Community-based preventive mechanisms, with broader participation including religious leaders, is another vital aspect that promotes mutual understanding, tolerance, non-discrimination and respect for diversity.

In conclusion, my delegation reiterates that the scourge of racism and intolerance manifests itself in different ways. It is a significant factor motivating and even aggravating economic and social disparities, thereby threatening the development progress of countries with challenges such as climate change, poverty and humanitarian crises. The 2030 Agenda acknowledges that a key barrier to reaching those furthest behind is discrimination and underscores the imperative of reducing inequalities and combatting discrimination which permeates all of the SDGs. While being cognizant that peaceful and inclusive societies cannot be achieved without sustainable development, and vice versa, if we are to truly leave no one behind, it is essential, that principles of equality and non-discrimination that are encapsulated in the 2030 Agenda itself, be given priority to create a future that is fully inclusive and equitable.