Statement by H.E. Kshenuka Senewiratne Permanent Representative of Sri Lanka & Chair of the Special Committee to Investigate Israeli Practices Affecting the Human Rights of the Palestinian People and Other Arabs of the Occupied Territories

Chair of the Special Committee to Investigate Israeli Practices

Affecting the Human Rights of the Palestinian People

and Other Arabs of the Occupied Territories

“Special Meeting in Observance of the International

Day of Solidarity with the Palestinian People” 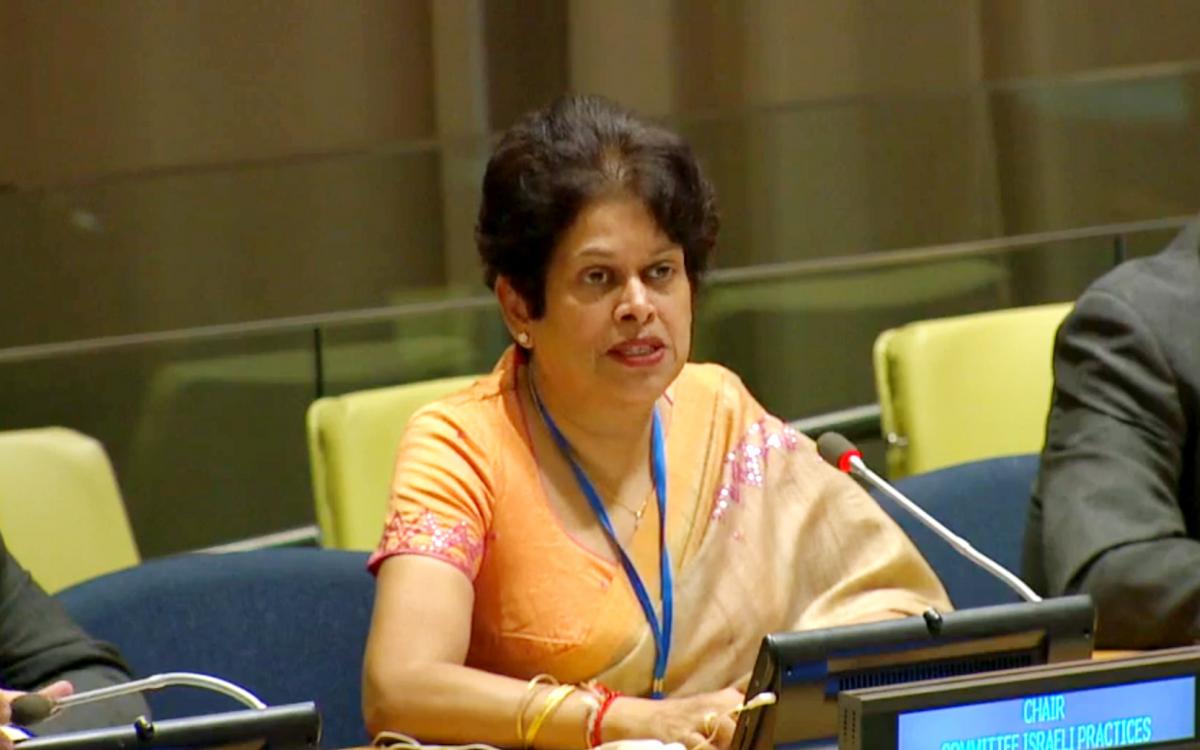 President of the General Assembly,

President of the Security Council,

Chef de Cabinet of the UNSG

Permanent Observer of the State of Palestine,

We are here today bound by a common purpose to seek ways to a peaceful and equitable solution to the question of Palestine. We are here today driven by compassion and concern for the people of Palestine, especially her children, and are also here, because we are inspired by the resilience and strength they continue to demonstrate.

In June this year in Amman, civil society representatives, victims and witnesses briefed the Special Committee on the situation of human rights within the occupied Palestinian territories and the occupied Syrian Golan.

These testimonies have brought to the attention of the Committee, the daily cycle of violence and hardship, where every aspect of life continues to be impacted by the unlawful occupation. The Committee has noted with concern the escalation of human rights violations, including violence from settler expansion and the grave humanitarian crisis in Gaza from the ongoing blockade and closure.

Earlier this month, the Committee presented its 51st report, pursuant to General Assembly Resolution 73/96. The report provides an update on a number of issues of concern, notably the continued expansion of Israeli settlements, the destruction and confiscation of Palestinian property, increase in settler violence, continued use of administrative detention of Palestinians, including children, the exploitation of natural resources, the humanitarian crisis in Gaza and the lack of accountability for violations.  In view of the 30th anniversary of the adoption of the Convention on the Rights of the Child this year, the Committee focused part of its report on the human rights situation of Palestinian children.

In Gaza, where half of the 1.9 million population are children, had 29 children killed during demonstrations and 4,387 injured, within a year from September 2018. In the West Bank 6 children were killed with 1,238 injured in the same period.

The Report also covers the deteriorating situation in Gaza, where the Committee is concerned about the excessive use of force against demonstrators, that has resulted in 138 Palestinians killed and 15,901 injured.  The Gaza blockade that enters its 13th year, has resulted in severe restrictions on the freedom of movement of people and goods and serious consequences on access to health care and medicine. The Committee also remains concerned about the denial and delay of exit permits to Palestinians to access medical service and other restrictions imposed in this regard.

In addition, according to testimonies, increasing land seizures, demolition of Palestinian homes, denial of building permits, restrictions of movement, use of arbitrary administrative detention and lack of accountability for settler violence are some of the practices that continue to dismay the Committee.

The Special Committee joins the international calls for a just and lasting resolution of the question of Palestine, based on the Two-State solution and an end to the suffering of the Palestinian people.

Both parties to the conflict must create the necessary environment to facilitate peace. There is an urgent need for mutual confidence-building measures to support efforts to resume dialogue and substantive negotiations. Safety of the civilian population in the Occupied Territories must be ensured in accordance with international law and practice.

The support for Security Council resolutions 242 of 1967 and 497 of 1981 and 2334 of 2016 regarding the Question of Palestine and the implementation of all UN Resolutions regarding the inalienable rights of the Palestinian people and the end of occupation of the Occupied Territories and the cessation of all illegal settlement activities, is reiterated.

Today, we continue to stand in solidarity with the Palestinian people and hope that the spirit of goodwill will assist them to work together to preserve their national identity amidst immense difficulties they endure.

On this International Day of Solidarity with the Palestinian People, let their resilience and strength of purpose inspire us, the international community, to rededicate our collective efforts and commitment, to forge a peaceful settlement on the Question of Palestine. To this end we reaffirm our steadfast support of their cause, as the people of Palestine strive to gain their legitimate rights and aspirations.