Statement by H.E. Dr. Rohan Perera before the Sixth Committee of the UN on the Report of the International Law Commission on the work of its Seventieth Session (Cluster I) on 26 Oct 2018

Before the Sixth Committee of the 73rd Session of the UNGA

Agenda Item 82: Report of the International Law Commission on the work of its 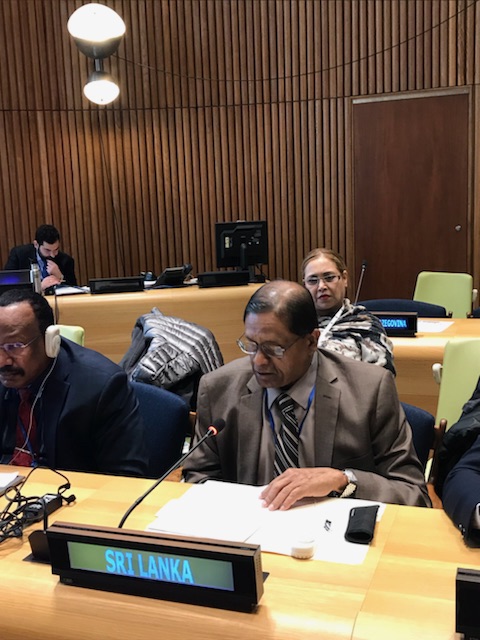 Let me commence by expressing our warmest congratulations to the Chairman of the ILC, Mr. Eduardo Valencia-Ospina, for his able stewardship of the International Law Commission at its 70th Anniversary Session.  The report reflects the fact that the Session has indeed been intense and a productive one befitting the occasion.  I also wish to thank him for the comprehensive presentation of the first cluster of topics at our meeting yesterday.  Our intervention today will focus on the work that has been completed on the topics of (i) Identification of Customary International Law” and (ii) Subsequent Agreements and Subsequent Practice in relation to the interpretation of treaties.

Turning first to the topic of Identification of Customary International Law: Custom as a source of International Law continues to play a vital role in the contemporary international legal order, notwithstanding the emergence and growth of the multilateral Treaty making process which enjoy a predominating role in current international relations.

The draft conclusions, as a whole, represent an effort by the Commission to provide a guide to practitioners to help them to better identify Customary International Law.  The wide agreement reached within the Commission on the “two elements approach” viz: (i) Widespread uniform and consistent practice and (ii) The acceptance of that practice as law or opinion juris, as confirmed in the jurisprudence of the ICJ, is to be welcomed

One aspect I wish to comment on is the complex and interactive relationship between Custom and Treaties, the two primary sources of International Law, as recognized in Art. 38 of the Statue of the ICJ, and the treatment of this issue in the draft conclusions.

Conclusion 11 on Treaties, which sets out the conditionalities under which a rule set forth in a Treaty, may reflect a rule of Customary International Law, is, in our view, a vital provision which injects a degree of clarity to this dynamic and complex relationship between the two principal sources of International Law.

Conclusion 11 (1) (a) (c) – captures the essence of this dynamic interplay between the two principal sources of International Law and in our view, will go a long way in clarifying any ambiguities and assist the  practitioner  in the better identification of Customary International Law.

(i) Conclusion 10 – Forms of evidence of acceptance as law (opinion juris), particularly, the aspect of silence or inaction, as a factor in the formation of Customary International Law, and conclusion 15 on the “Persistent Objection”.

During the consideration of draft Conclusion 10(3) adopted by the Commission on first reading, some States had urged a degree of caution and suggested that inaction should not give rise to an automatic presumption of implied consent and, accordingly, both knowledge of the rule and ability to react on the part of the State should be taken into account in determining whether a State’s inaction was intentional and thus could serve as evidence of  opinion juris.

We welcome the fact that Special Rapporteur has proceeded on the basis that acceptance as law must not be lightly inferred.  Having stated in conclusion 10(3) that ‘failure to react overtime to a practice may serve as evidence of acceptances as law ‘opinion juris’, only under certain conditions,  he further elaborates this aspect in the commentary by working in careful caveats, such as, that it is essential that a reaction to the practice in question would have been called for as may be the case where the practice is one that affects the interests or rights of the State failing or refusing to act, and secondly, the reference to a State being “in a position to react” means that the State concerned must have had knowledge of the practice, and that it must have had sufficient time and ability to act.

These careful caveats and the clarity thus provided in the commentary would serve as a useful safeguard against any tendency towards acceptance as law being lightly inferred from inaction.

Conclusion 15 on the ‘Persistent Objector Principle, though rooted in the ICJ jurisprudence (especially the Anglo-Norwegian Fisheries Case) has been the subject of differing views among some States as well as among writers. The Principle essentially seeks exemption from a customary obligation on the basis of unilateral assertions or acts of a State.

The potential risk of the principle being abused have been raised by some States who have contended that the determination that a State is a “persistent objector” should be context specific and called for consideration to be given to number of factors, i.e. whether in a specific case the State in question is in a positon to express its objection, while others have questioned the necessity of the requirement that the objection be “maintained persistently”.  Some States, for instance, have suggested that an objection clearly expressed by a sovereign State during the formation of a customary rule is sufficient to establish their objection and does not generally need to continually maintain their objection.  This takes into account the practical reality that States tend to remain silent and only react to specific instances, which requires them to react when it involves their rights or obligations.

Special Rapporteur has sought to address some of these concerns                   in the Commentary, emphasizing the fact that assessing   whether   this requirement  has  been  met  needs  to  be  done  in  a  pragmatic  manner,  bearing  in  mind  the circumstances  of  each  case.  The Special Rapporteur states: “The  requirement  signifies,  first,  that  the  objection  should  be reiterated  when the  circumstances  are  such  that  a  restatement  is  called  for  (that  is,  in  circumstances where silence or inaction may reasonably lead to the conclusion that the State has given up its objection). It is clear, however, that States cannot be expected to react on every occasion, especially where their position is already well known. Second, such repeated objections must be consistent overall, that is, without significant contradictions”.

The cautionary note that has been stuck in the accompanying commentary will help to some extent in addressing some of the concerns that have been raised in the past, on the wisdom of including the Principle of Persistent objector in the draft conclusions, since it is essentially an exception to the application of Customary International Law.

Turning briefly to the topic of “Subsequent Agreement and Subsequent Practice” in relation to the interpretation of treaties, the draft conclusions which aim at explaining the role that subsequent agreement and subsequent practice play in the interpretation of   treaties, based on the Vienna Convention on the Law of the treaties (1969), are supported by rich and comprehensive commentaries reflecting the jurisprudence of International Courts and Tribunals as well as practice of States and International organizations. The draft conclusions provides a degree of clarity within the general framework of the rules of the Vienna Convention which constitutes an integrated framework for the interpretation of treaties, specifically Articles 31 & 32, by identifying and elucidating relevant aspects and addressing certain questions that may arise when applying those rules.

Conclusion 8 on the “Interpretation of treaty terms as capable of evolving overtime” is of particular interest from a legal perspective as it addresses the general question of whether the meaning of a term of a treaty is capable of evolving overtime, a question that has arisen time and again in proceedings before Courts and other Tribunals.  The Special Rapporteur has tread a careful path between two schools of thought; between those who favour a contemporaneous interpretation and those who support an evolutive or an evolutionary interpretation of treaties.  On the basis of an extensive analysis of jurisprudence draft conclusion 8 emphasizes that the subsequent agreement and subsequent practice, as any other means of treaty interpretation, can support both a contemporaneous and evolutionary interpretation, where appropriate.  To justify this approach, Special Rapporteur has based the conclusion on decisions of International Courts and Tribunals, which appear to have followed a case by case approach in determining, whether or not a treaty term should be given a meaning capable of evolving overtime. We commend the Special Rapporteur for the balanced and cautious manner in which this complex issue has been addressed.

In summary, Mr. Chairman we wish to congratulate accomplishment of the International Law Commission, in concluding, the work on Identification of Customary International Law and on Subsequent Agreements and Subsequent Practice in relation to the interpretation of treaties.  Collectively, they make a positive contribution to the general corpus of the law of treaties, building upon the general framework of the Vienna Convention on the Law of Treaties.  For this, we are grateful for the devoted efforts of Special Rapporteurs Michael Wood and Georg Nolte.

Finally, we agree with the recommendations made inter-alia that these conclusions be annexed to the Resolutions of the  GA and to ensure their widest dissemination and to commend the draft conclusions together with the invaluable commentaries thereto to the attention of States and all who may be called upon to interpret treaties.