Statement by H.E. Dr. Rohan Perera before the Sixth Committee, on Protection of Persons in the event of Disasters, on 1 Nov 2018

Before the Sixth Committee of the 73rd Session of the UNGA

Agenda Item 90: Protection of Persons in the event of Disasters 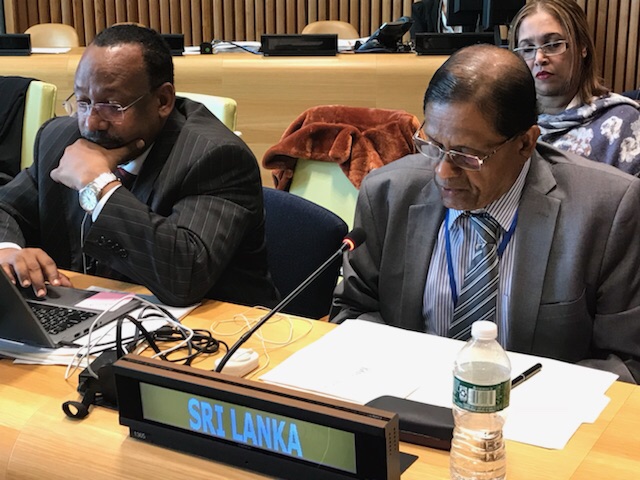 We are discussing Agenda Item 90 on the Protection of persons in the event of disasters, at a time when the world is witnessing an unprecedented number of natural disasters with increasing intensity. The reality is that we are confronted with interconnected global challenges such as climate change, population growth and urbanization, among others. The nature of these challenges requires the strengthening of the International Humanitarian Assistance Framework.

Even as we continue our collective international efforts to define and correct the depredations of humankind on the Planet Earth, it is our collective duty to protect, in line with our respective capacities, those most vulnerable to the effects of these depredations. We have now made much progress in recognizing the environment and its protection as the responsibility of all nations. We have largely accepted the circular connection between ecological management and the human condition.

Island nations like my own, are particularly vulnerable to the impact of ocean environments and climate change. In the past decade or so, Sri Lanka has been increasingly devastated by nature driven tragedies. Floods, landslides, the massive Tsunami of 2004 and other disasters have seriously affected my country.

It is in this context that we welcome the work of the International Law Commission, which will contribute to the obligations of advancing and strengthening the international legal regime pertaining to the protection of persons in events of disasters.

In these efforts the Commission recognized the core role that the principles of humanity, neutrality, and impartiality play in humanitarian assistance and disaster response.

I had the opportunity, during my tenure on the International Law Commission, to work closely on this topic and I do recall the detailed and sometimes intense discussions we engaged in on key issues surrounding this topic. Consequent to these discussions, the Special Rapporteur was able to strike the right balance between certain contending principles, such as between state sovereignty on the one hand, and duty to cooperate on the other, and also to work out a carefully calibrated and qualified “consent regime” with regard to international assistance, taking into account relevant General Assembly resolutions.

My delegation welcomes the draft articles as an important contribution to the field of international law governing response to disasters, and supports the recommendation made by International Law Commission to the Assembly to elaborate a convention on the basis of the draft articles on the protection of persons in the event of disasters adopted by the Commission at its sixty-eighth session (2016).

Accordingly, We are of the view that such an instrument will serve to strengthen  existing best practices among states and enhance international cooperation for the effective prevention, reduction and management of disaster risks.