Statement by H.E. Dr. Rohan Perera at the Security Council Open Debate on the Women, Peace and Security Agenda, 25 October 2018

Security Council Open Debate on the 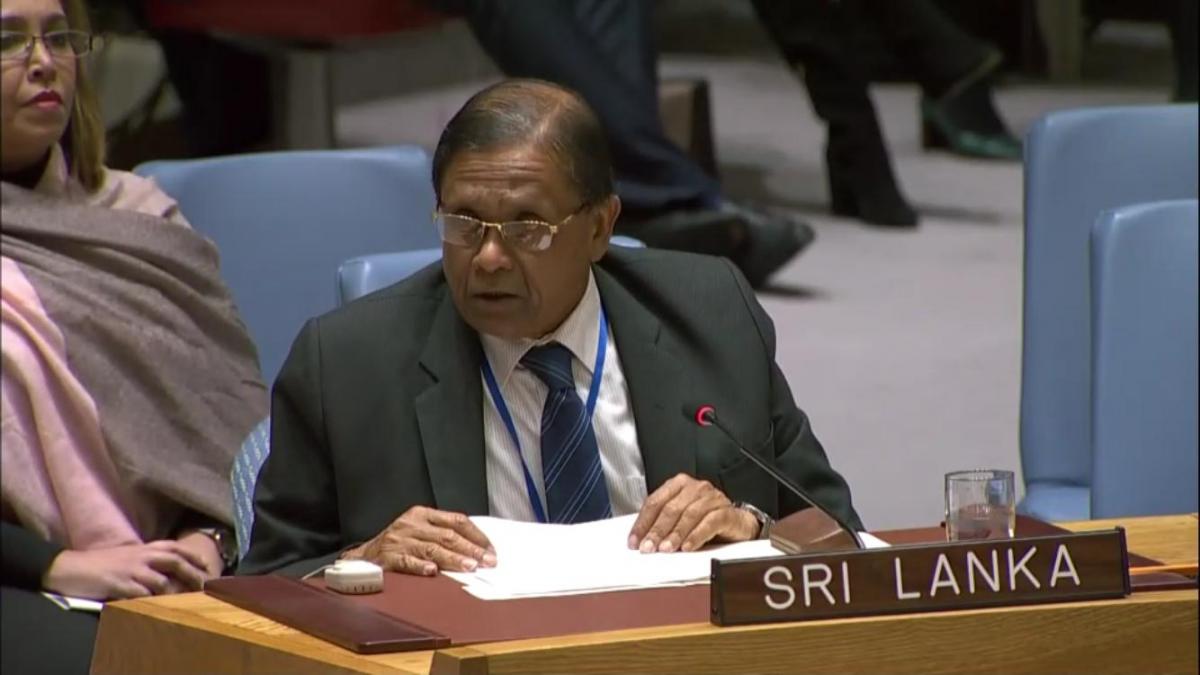 I congratulate the Plurinational State of Bolivia on its Presidency of the Security Council and for organizing this open debate, and I thank the Secretary General and other briefers for their remarks and acknowledge the contributions made by the Executive Director of UN Women and other distinguished delegates and representatives.

Sri Lanka firmly believes that it is the meaningful participation of women in the international peace and security agenda that will bring about change in the world. It does not suffice that Women are present at the peace table merely to satisfy a superficial gender balance component or to check a box on a management reform achievements sheet.  Women must be given the space to truly engage both at the peace table and beyond - and at all levels – as leaders, researchers, workers, pen holders and change makers.

Sri Lanka has identified gender equality and women’s empowerment as priority areas and are party to numerous international conventions and declarations including the Convention on the Elimination of All Forms of Discrimination Against Women (CEDAW).

The government is currently working towards achieving gender equality through the enactment of gender sensitive laws and formulation of policy and through action plans. Gender equality has been addressed through the Fundamental Rights Chapter in the Constitution and by meeting treaty obligations as well as by achieving gender indicators in the Sustainable Development Goals.

Sri Lanka was one of the first countries in Asia to grant Universal Adult Franchise in 1931. Following this we enacted laws in 1939 and in 1945 to ensure free education for all at primary, secondary and tertiary levels. These positive policies implemented over the years resulted in gender parity in education. The right to a free education was enshrined in the Sri Lankan Constitution, which also mandates compulsory schooling between the ages of five and 14. Over 60 percent of university undergraduates are women. At the primary level, female school attendance is essentially universal, while it stands at 99 percent for boys.

Free healthcare was introduced very early after Independence in 1948. Sri Lanka adopted a Women’s Charter two years before the “Beijing Platform for Action,” and we already have a National Plan of Action on Women in place.

For Sri Lanka, Sustaining Peace through Women’s Political and Economic Empowerment – a subject you have so carefully chosen for our debate today - is very close to our hearts. Sri Lanka is now in a post conflict era traversing a path of reconciliation and justice. Never has the political and economic empowerment of women been more vital to our peace and prosperity than it is today. The protracted and brutal armed conflict in Sri Lanka left 24 percent of our female population widowed.

Sri Lanka is aware that the protection and economic, social and infrastructural needs of war affected women continue to require our attention. To this end we find it crucial to incorporate gender in the transitional justice process as stipulated in the United Nations Security Council Resolution 1325.

Our government is focused on three priority areas of women’s empowerment, namely: (1) women’s economic enhancement and financial identity (2) the elimination of violence against women; and (3) women’s engagement in public and political life.

The mechanisms and processes for national unity and reconciliation is being conducted under the overall guidance of the Office of National Unity and Reconciliation (ONUR) headed by former president Mrs. Chandrika Kumaratunge.

Sri Lanka is also in the process of implementing peace building projects which involve joint programming by the UNDP with agencies such as UNICEF, UNFPA, WHO and UN Women to implement the joint UN Programme on Prevention of and Response to Gender-based Violence in Sri Lanka, a program funded by UN Women.

Sri Lanka has addressed the issue of Violence Against Women using three approaches: (1) Prevention (2) intervention and (3) advocacy for the formulation of policies and laws. A toll free Help line has been established in the Ministry for Women and Child Affairs to receive complaints, and provide redress to the victims through referral services. Committees to address sexual harassment in the workplace have been established in Ministries.

In this regard the government has allocated a quota (25%) for women in local government bodies. The Ministry of Women and Child Affairs has also set apart at least 25% of budgetary allocations to projects for rural economic development, for the economic enhancement of women.

Additionally, Sri Lanka is seeking in the near future to reserve a minimum of 25 percent of representation in parliament for women, through a comprehensive constitutional reform process. However, in this regard we are ever mindful of the challenges women face when entering politics and the toxic atmosphere that meets them. They experience disproportionately more intense personal scrutiny, discrimination, character assassination, violence and defamatory statements than their male counterparts. Unfortunately politics has become for women an inhospitable environment and our government is committed to fighting the root causes and institutional biases that prevent women from becoming fully empowered in their chosen fields.

Sri Lanka had demonstrated its wholehearted commitment to the elimination of SEA. It was one of the first countries to sign the Secretary General’s Voluntary Compact on eliminating Sexual Exploitation and abuse; our president, His Excellency Maithripala Sirisena has joined the Secretary General’s Circle of Leadership; and we have made contributions to the Trust Fund to help victims of Sexual Exploitation and abuse.

As Sri Lanka proceeds with its reconciliation and peace building process with the active participation of women at all levels, we will continue to share our experiences and practices, especially in relation to the implementation of the women peace and security agenda.