Statement by H.E. Dr. Rohan Perera, Permanent Representative of Sri Lanka to the United Nations, at the General Assembly Plenary Session to Consider Draft Resolution A/70/L.43, and the Joint Debate on the Report of the Peacebuilding Commission 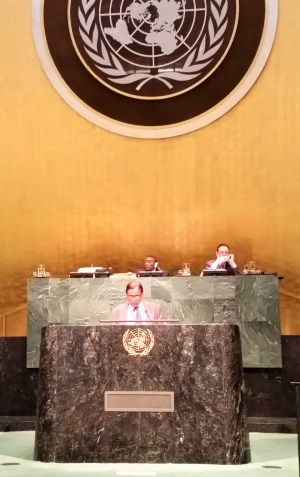 Thank you for convening this plenary meeting.

We welcome the adoption of the draft resolution A/70/L.43 on the 2015 Review of the United Nations Peacebuilding Architecture by the General Assembly.

This General Assembly resolution and its identical Security Council version are the outcomes of a lengthy and arduous intergovernmental consultation process.  My delegation wishes to place on record its deepest gratitude to Ambassadors Gillian Bird of Australia and Ismail Gaspar Martins of Angola for co-facilitating and diligently guiding us through the consultative process. Our thanks also go to the experts of those two Missions, without whose efforts this outcome would not have been possible.

The adoption of draft resolution A/70/ L.43 and the parallel Security Council resolution is most timely. It augurs well for the strengthening of the United Nations Peacebuilding architecture to deal with the contemporary challenges in peacebuilding. This is particularly important in the context of the human cost and the great suffering caused by conflict across the globe in these troubled times.

Conflict prevention, effective peacebuilding, addressing the root causes of conflict as well as ensuring non-recurrence would save millions of lives from the scourge of conflict and war. It is imperative in this regard that measures to prevent the outbreak, escalation, continuation and recurrence of conflict be taken forthwith. The present resolution reflects our collective will to tread down that path.

As a country emerging from a thirty-year conflict that left deep scars in the entire socio-ethnic fabric of the nation, Sri Lanka is uniquely placed to reflect on the human cost and indescribable suffering that the conflict brought about and to commit ourselves to post-conflict peacebuilding.

In this context, reconciliation and healing the hearts and minds of our people have become our top most priorities. We are deeply conscious of the fact that Peacebuilding has to be done as a matter of urgency to prevent a recurrence of conflict.

The political transition in Sri Lanka in January last year brought about crucial peacebuilding opportunities in the country. Our aim is to promote national reconciliation, giving priority to generating trust and confidence building measures among people affected by the long conflict.

We believe that peacebuilding is an inherently political process. It is also essentially a nationally owned process, which has to be properly sequenced, taking into account the national circumstances, with the assistance of all stakeholders including the United Nations.

Post-conflict peacebuilding in Sri Lanka is almost synonymous with post-conflict reconciliation, and is based on the principle of national ownership.   We have recognized that the process of reconciliation involves addressing the broad areas of truth seeking, justice, reparations and non-recurrence. The process of working out the contours of the architecture of the domestic mechanisms for truth seeking, justice, reparations and guarantees of non-recurrence, is evolving.

In Sri Lanka, the process of national consultations on transitional justice, which is a victim-centred process has already begun. There is a significant Civil Society involvement in this process. We have obtained technical assistance from the United Nations Special Rapporteur on the Promotion of Truth, Justice, Reparation and Guarantees of Non-recurrence in the crucial task of framing the questions for consultations. I wish to thankfully mention that this process is supported by the funding from the United Nations Peacebuilding Fund.

The funding is pursuant to the declaration of Sri Lanka as a country eligible to receive financial support from the United Nations Peacebuilding Fund, by the Secretary-General, last year.

These projects were funded by the Peacebuilding Fund’s Immediate Response Facility. A longer term peacebuilding plan is currently being prepared by the UN Peacebuilding Support Office in consultation with the Government of Sri Lanka, for which longer-term, predictable funding would be essential.

It would be remiss of me, if I do not stress enough in this debate, the importance of adequate, predictable and sustained financing for the UN peacebuilding efforts. The resolution has rightfully identified this dire need. We welcome in this regard the resolution’s recognition of the importance of strengthening partnerships between the United Nations and key stakeholders, particularly, international financial institutions.

Strengthening the UN Peacebuilding Fund through adequate contributions would be of paramount importance.  PBF funding enables the United Nations to seize political opportunities it would likely to otherwise miss.

However, it is discouraging to learn that the UN Peacebuilding Fund is hampered by decreasing contributions, where the projected contributions in 2016 fall too short of the actual funding needs for peacebuilding activities across the globe.

In this context, Sri Lanka welcomes the proposed donor pledging conference to be held on the sidelines of the 71st UNGA in September this year to refinance the UN Peacebuilding Fund, as a follow-up to the resolution A/70/L.43 and the Security Council resolution that are adopted today. Sri Lanka is pleased to confirm that it would be co-hosting this pledging conference with the UN Peacebuilding Support Office and several other Member States.

We are of the view that a donor pledging conference of this nature would help to increase the level of contributions, the number of donors and the predictability of PBF’s funding, by way of voluntary contributions, including multi-year commitments. We look forward to the active participation of Member States in the pledging conference in September.

I thank you Mr. President.