Statement by the Sri Lanka Delegation 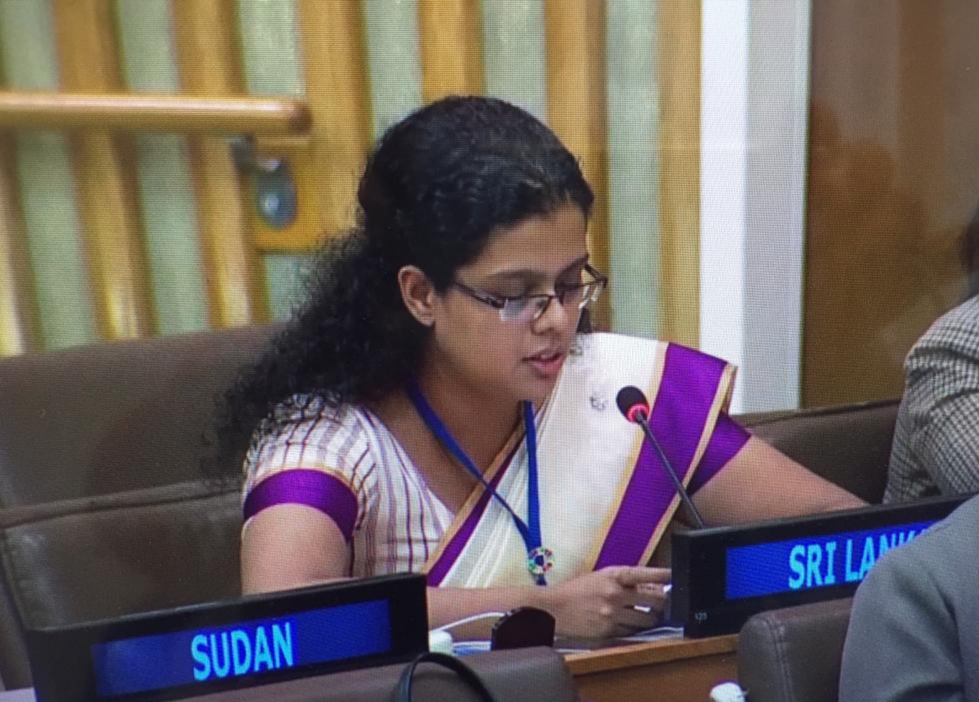 Sri Lanka aligns itself with the statement delivered by Palestine on behalf of the G77 and China on Agenda Item 26 and takes note of the reports presented by the Secretary-General on this important topic.

While recognizing that vital steps have been taken by the global community towards achieving gender equality and empowering women and girls, it is ominous that progress on this issue, which is also one of the goals of the 2030 Agenda on Sustainable Development as well as one that cuts across all 17 SDGs, has been slow. We continue to perceive that challenges and obstacles remain that stall the socio-economic and political development of women.

Technological transformations, demographic shifts, increasing migratory flows as well as natural disasters and climate change have profoundly impacted on the advancement of women, their risks and vulnerabilities as well as opportunities. As we approach the 25th anniversary of the Fourth World Conference on Women where the Beijing Declaration and the Platform for Action were adopted, Sri Lanka believes it is timely for a comprehensive review of the progress made so far, and identify remaining gaps to address barriers to gender equality and the empowerment of women and girls.

Sri Lanka is cognizant of the invaluable contribution of women to the social and economic development of the country. We continue to be committed towards consistent and sustainable pro-equality and pro-empowerment of women policies and have integrated gender-related priorities into government plans and legal frameworks. As a result the country is making progress in achieving equality for women in all aspects including their equal participation in the labour force and increased engagement in decision making processes.

Sri Lanka is proud that the world’s first female Prime Minister hailed from this country in 1960. This is evidence to the fact that there is ample opportunity in the country for women to succeed in politics. The imposition of quotas to encourage greater participation of women in the political structure of the country must be viewed hand in hand with existing cultural norms in the country which influence women making the personal decision to undertake the arduous task of engaging in politics.

Women represent half of the working population in the country and excel in higher education. The increasing number of Sri Lankan women being engaged in all levels of the public, private, administrative and corporate sectors is extremely encouraging. At present, Sri Lankan women hold top ranking positions as Members of Parliament and local Government, Secretaries to Ministries, Heads of Diplomatic Missions, and the Judiciary.

The Secretary-General in his Report A/74/224, refers to climate change affecting the livelihoods and well-being of women and men differently and that its impacts amplify existing gender inequalities. Sri Lanka has experienced this phenomenon. Having faced a devastating tsunami in 2004 and in more recent years, enduring extreme consequences of climate change, such as droughts and floods, we witnessed in all these instances, women as among the most vulnerable segments of society, who were disproportionately affected by these calamities. As such Sri Lanka calls for systematically addressing gender gaps in tandem with efforts to combat climate change as an  effective  mechanism  to  build  climate  resilience  of  households, communities and nations.

Subsequent to the bane of separatist terrorism that ravaged the country for nearly 30 years, culminated in one of the key target groups in Sri Lanka’s empowerment programmes being female-headed households, including war widows. Sri Lanka recognizes that post conflict environments place heavy financial burdens on women, and therefore need to pursue women’s economic empowerment. In this regard, Sri Lanka has developed, with the support of the UN Gender Theme Group, a National Action Plan for Women Headed Households in areas such as health, income security and psychosocial services.

Sri Lanka appreciates the continued efforts of UN Women on several projects related to the empowerment of women in Sri Lanka. Most recently we initiated a process to develop an Action Plan on the implementation of UN Resolution 1325 with the support of the Government of Japan and UN Women, that seeks to accelerate positive change on gender equality, empowerment of women and girls and respect for their human rights to achieve and sustain peace in Sri Lanka.  We look forward to the continued partnership with UN Women and our bilateral partners for the betterment of women and girls in Sri Lanka.

Sri Lanka strongly condemns all forms of violence against all women and girls, including sexual harassment. To a great extent, this is rooted in historical and structural inequality, severely affecting the fundamental freedoms of the female gender. Therefore it constitutes a major impediment to their full, equal and effective participation in society, as well as economic and political life. As such, gender mainstreaming has been introduced in all Government Ministries, by establishing committees related to budgeting, adopting equity and equality principles in policy formulation, and awareness building. These Committees are also responsible for combatting sexual harassment in the work place.

In line with the principle of zero tolerance on sexual and gender based violence, Sri Lanka adopted the policy framework and National Plan of Action to address Sexual and Gender Based Violence (SGBV). In the multilateral fora, with regard to Sexual Exploitation and Abuse (SEA) in UN Peacekeeping Operations, Sri Lanka has joined the Circle of Leadership and has signed the Secretary General’s Voluntary Compact on Prevention of SEA and also contributed to the Voluntary Trust Fund for Victims of Sexual Abuse. Sri Lanka is also a member of the Group of Friends for Gender Parity and to Eliminate Sexual Harassment.

In conclusion, Sri Lanka reiterates its firm commitment to the promotion and protection of women’s rights, gender equality, and empowerment of women and girls, which is integral to all dimensions of inclusive and sustainable development.