Statement delivered by Mrs. Sonali Samarasinghe, Minister, under Agenda Item 11 at the 25th Session of the International Seabed Authority in Kingston, Jamaica, on 25th July 2019 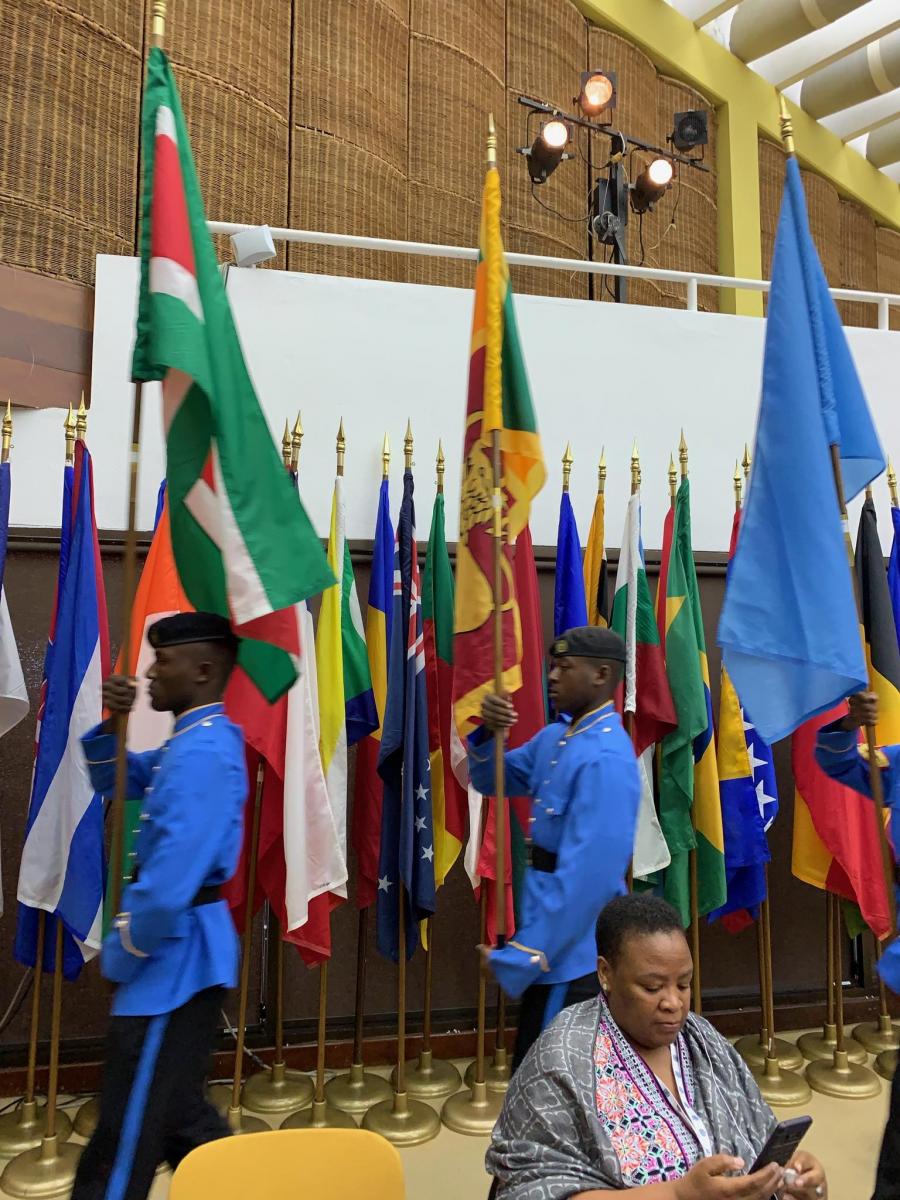 The International Seabed Authority held a series of commemorative events on 25th July 2019 to mark its 25th Anniversary. Photo shows the Sri Lankan flag as members of the Jamaican Combined Cadets Force pay tribute by carrying the flags of member states in a solemn ceremony.

Minister, Permanent Mission of Sri Lanka to the United Nations in New York 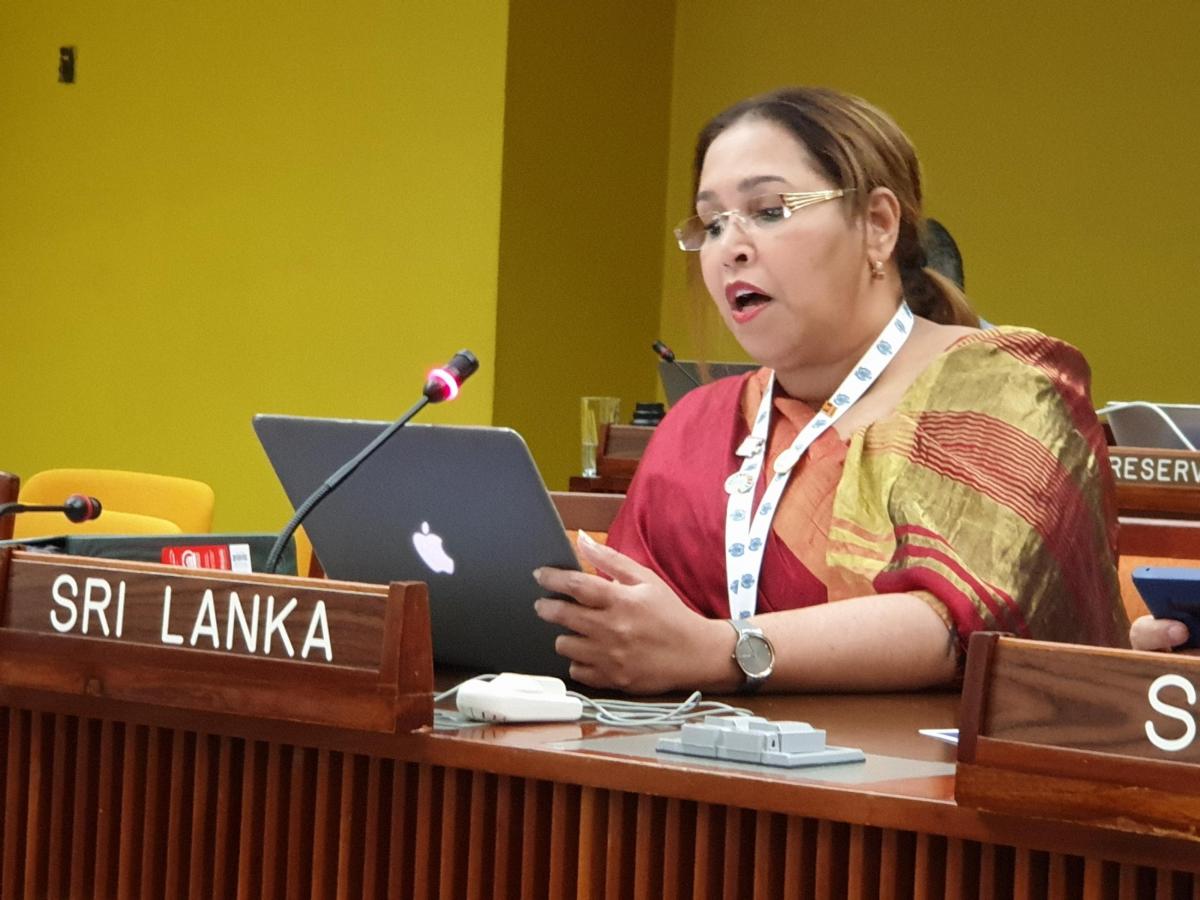 Mrs. Sonali Samarasinghe, Minister, Permanent Mission of Sri Lanka to the United Nations, delivering a statement in honor of the occasion.

Sri Lanka thanks his excellency the Honorable Prime Minister of Jamaica for his presence here today during this auspicious occasion for the ISA.

We associated ourselves with the statement made by the distinguished representative of Republic of Korea and would like to make the following remarks in our national capacity.

One of the most significant outcomes of the Post World War II Global Political Order, was the massive codification exercise, undertaken by the United Nations, to manage ocean related issues, including the breadth of the territorial sea, and the freedom of the high seas. The culmination of this process was the Third UN Conference on the Law of the Sea – which, was chaired by Ambassador Hamilton Shirley Amerasinghe of Sri Lanka. In fact the Hamilton Shirley Amerasinghe Fellowship on the Law of the Sea was established by the UN General Assembly in 1981 in recognition of his contribution to the Third United Nations Conference on the Law of the Sea, as its first President from 1973 to 1980.

Sri Lanka continues to contribute to the Fellowship fund in order to assist candidates to acquire additional knowledge of the United Nations Convention on the Law of the Sea,

Sri Lanka was instrumental, as Chair, in the historical processes that also created the three key institutions established by the Convention, including the International Seabed Authority. It therefore gives my delegation great pride in being here today, on this historic occasion – as the ISA celebrates its silver jubilee.

However, Madam President, the present global dynamic is very different from the one that produced UNCLOS. The world order is becoming more polarized and fragile, and multilateralism is increasingly under threat. The ability of the collective to manage interdependence effectively, is at risk.

It was Sri Lanka that took the initiative in 1971, to propose the Indian Ocean as a Zone of Peace to the United Nations General Assembly. Since then, we have continued to chair the UN Ad Hoc Committee on the Indian Ocean. Though the concept of the Indian Ocean as a ‘Zone of Peace’ was conceived in a different political environment, today, the emergence of a multi polar world, and a fast paced international order, has led to a cacophony of influences, stakeholders and interests in the Indian Ocean – as indeed in other regions.  We face many non-traditional threats, and regional consensus is required on common concerns, including on those connected to seabed mining and maritime research, among others.

In his annual report on ‘Oceans and the Law of the Sea’, released in March 2019, the United Nations Secretary-General underscored the cross-cutting role of ocean science in the achievement of the Sustainable Development Goals (SDGs). This surely is the fulcrum upon which the ISA mandate rests. Therefore, Sri Lanka takes full note of the declaration of the Decade of Ocean Science, for sustainable development, from 2021 to 2030, with a view to creating a new foundation across the science-policy interface in order to strengthen the management of the oceans and coasts for the benefit of all humanity.

In conclusion Madam President, we reiterate our best wishes and support to the International Seabed Authority, and we thank the Secretary General and the Secretariat for their extraordinary efforts in organizing these celebratory events, around which we may all rally as one humanity – remembering, that in all our efforts, we must leave no one behind.