Statement delivered by H.E. Mrs. Kshenuka Senewiratne, Ambassador and Permanent Representative, at the General Debate of the Second Committee, 8 Oct 2019 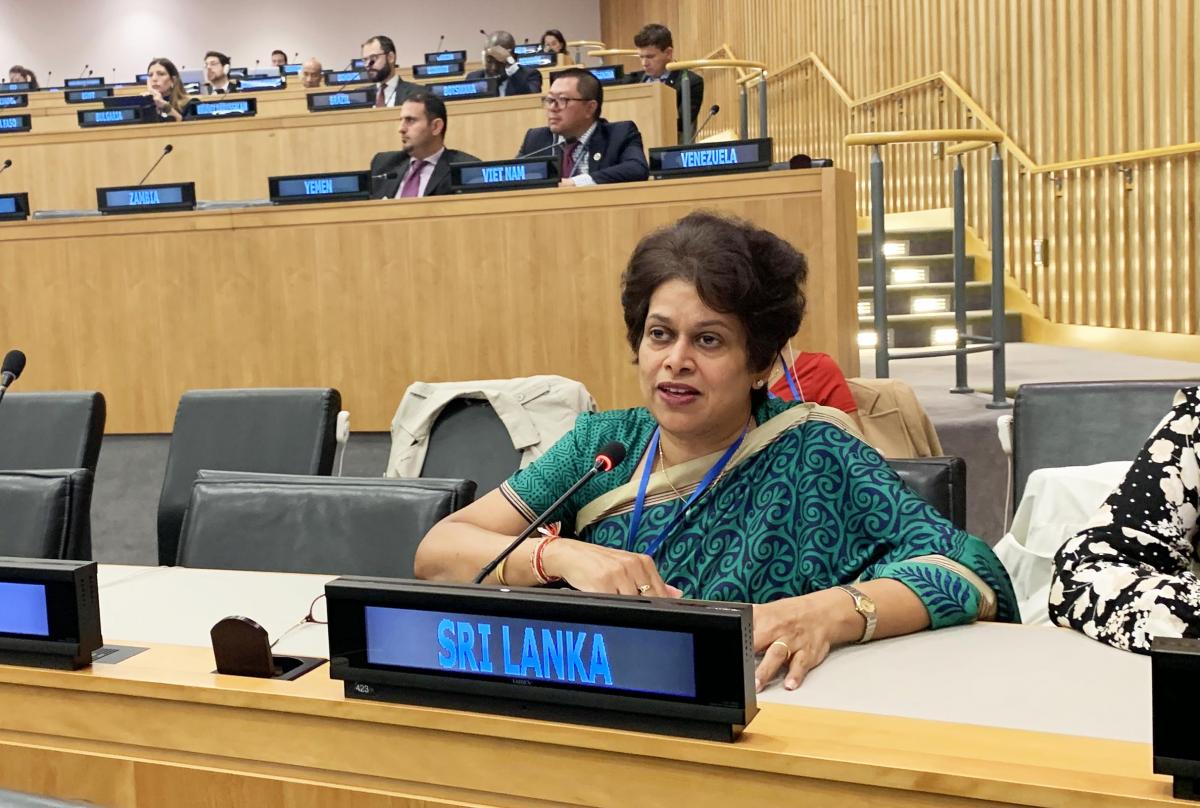 Sri Lanka is pleased to associate itself with the statement made by the distinguished representative of the State of Palestine on behalf of the G-77 and China.

The world today affords us tremendous opportunities, as well as poses challenges.  The 2030 Development Agenda serves as a blue print to harness this potential and seek solutions to obstacles, as we strive to achieve progress for all mankind. This year, we completed the first four year cycle of reviewing the implementation of the SDGs. The recently concluded SDG Summit held on the sidelines of the 74th UNGA and the 2019 HLPF have confirmed that our collective efforts have begun to bear fruit. Global poverty levels have declined, maternal and early childhood mortality rates have reduced and access to clean fuel and energy has increased, regrettably however, we remain confronted with a plethora of areas which need concerted collective action.

Persistent challenges and emerging global trends impact the manner in which we implement the SDGs. Inequality, irregular migration and slow economic growth have affected the implementation of the SDGs. The rapid advancements in technology, while offering tremendous opportunities, could also lead to a ‘digital divide’ or its broadening, thereby intensifying inequality and exclusion between nations. The looming climate emergency has become an existential threat to many countries, especially to island nations such as Sri Lanka.

In such a global scenario, it is vital to accelerate collective efforts towards implementing the 2030 Development Agenda. In this regard, Sri Lanka welcomes the Declaration adopted at the SDG Summit, which provides guidance on enhancing future action on implementation and addressing relevant gaps. 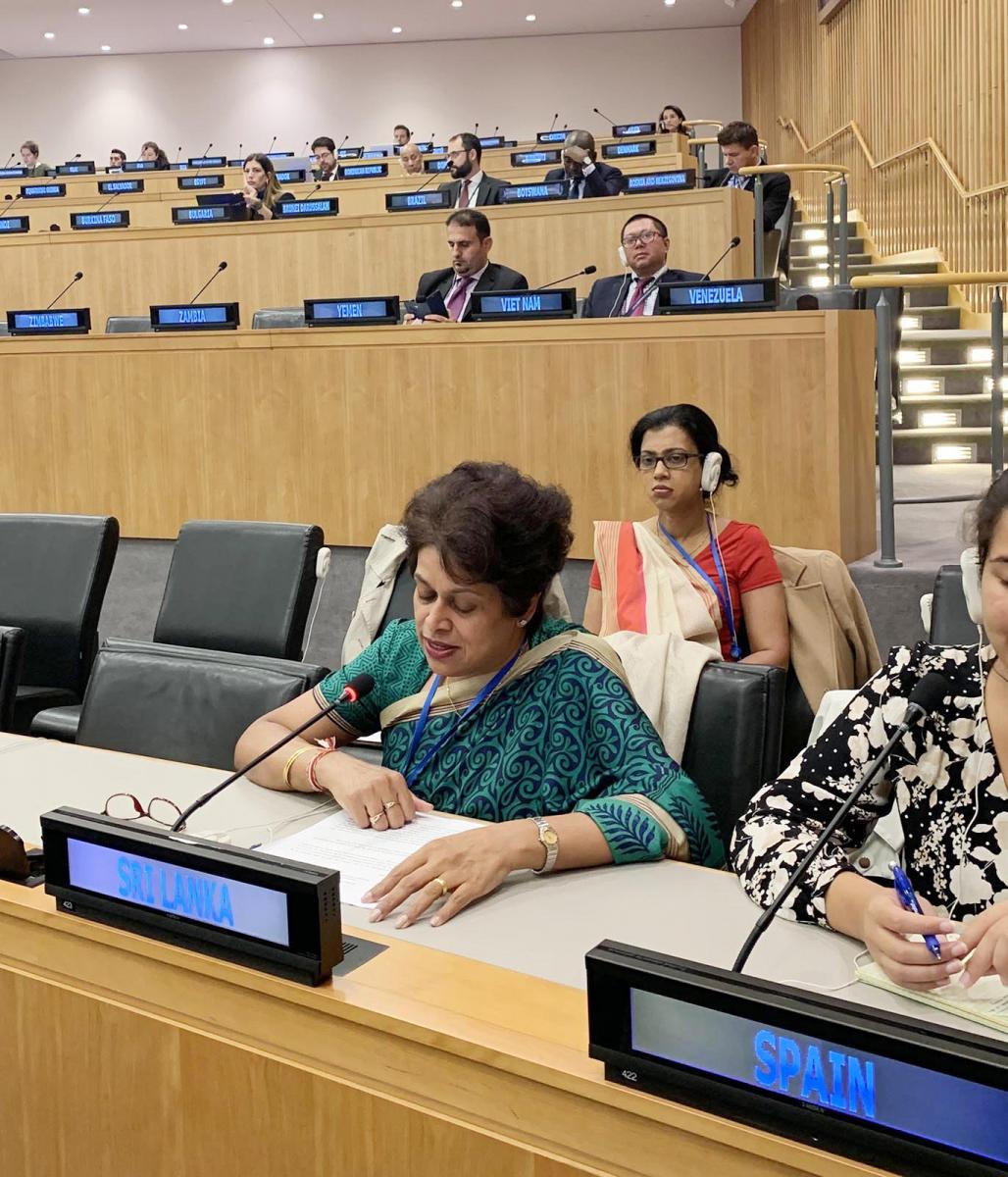 Climate change remains one of the greatest threats the world faces today. Its indiscriminate, unpredictable and widespread nature, has placed our planet and peoples at risk. Developing countries are facing the possibility of their hard earned development gains being reversed and for the most vulnerable of Member States, climate change has become an existential challenge.

As the world stands on the brink of a climate emergency, Sri Lanka calls for urgent and meaningful action to combat this scourge, in line with the principles of the Paris Agreement. It is imperative that collective action focuses on supporting the most vulnerable Member States to build resilience, strengthen preparedness and increase their capacity to mitigate and adapt to climate change.  In this regard, Sri Lanka welcomes the convening of the Climate Action Summit last month, where Member States proposed innovative solutions to combat climate change. My country also looks forward to a successful outcome of the COP 25 of the UNFCCC to be held in December in Chile.

The implementation of the 2030 Development Agenda is a collective effort and partnerships play a key role in our path to progress. Sri Lanka has been closely engaging with all stakeholders such as civil society, academia, women and youth in formulating initiatives and implementing projects relating to SDGs, including in the preparation of the country’s Voluntary National Review which was presented in 2018.

In addition to stakeholder partnerships, Sri Lanka also works closely with international organizations and bilateral partners which provide valuable assistance to the country on our path to development. The UNDP in particular, has been a strong partner in Sri Lanka’s efforts and have supported national initiatives on climate smart agriculture, rehabilitation of irrigation systems, rain water harvesting and providing safe drinking water in the dry zones of the North of the country.  In addition, the UNDP has also collaborated in initiatives to replace imported fossil fuel with biomass derived energy and assisted in the establishment of a national data collection and management system to facilitate better design and enforcement of environmental policies. My delegation takes this opportunity to thank the UNDP for its unstinted support to Sri Lanka through its offices in Colombo and New York and looks forward to enhancing this cooperation in the future.

The success of the 2030 Development Agenda lies in the collective ability to align and mobilize resources to fund the implementation of the SDGs.  In this regard, Sri Lanka welcomes the convening of the High Level Dialogue on Financing for Development held on 26th September 2019, which sought to reinvigorate global commitment and address any gaps in financing the SDGs.  My country reiterates the important role that ODA plays in financing the SDGs and it is imperative for the relevant Member States to abide by their commitments.

North-South Co-operation is vital for financing and supporting inclusive and sustainable development. Sri Lanka strongly reiterates however, that such co-operation needs to be mutually beneficial and in line with national priorities of developing countries, devoid of any conditions.

South – South co-operation is fast expanding as a means of co-operation between developing countries, in their efforts to achieve the 2030 Development Agenda. In this regard, Sri Lanka welcomes the Second High Level UN Conference on South-South Co-operation held in Buenos Aires in March this year and remains firmly committed to the effective implementation of its outcome document. However, it must be remembered that South-South Cooperation is only a complement and not a substitute for North-South Cooperation, as the latter remains the most important pillar for development financing.

Mutually beneficial South-South Co-operation has also been an important aspect of Sri Lanka’s development initiatives.  In July this year, Sri Lanka joined China and Ethiopia on a trilateral South-South Co-operation initiative focusing on enhancing access to renewable energy technologies, such as biogas and solar power.  Such close technical cooperation between countries of the South is an important contributor towards achieving sustainable development.

In conclusion, let me reiterate Sri Lanka’s support to the vital role played by the Second Committee in enhancing and encouraging global efforts towards the realization of the 2030 Development Agenda and wish this Committee a productive and successful session.