Statement delivered by H.E. Kshenuka Senewiratne before the Sixth Committee under Agenda Item 83: Rule of Law at the National and International Levels, 11 Oct 2019

Before the Sixth Committee

Agenda Item 83: Rule of Law at the National and International Levels 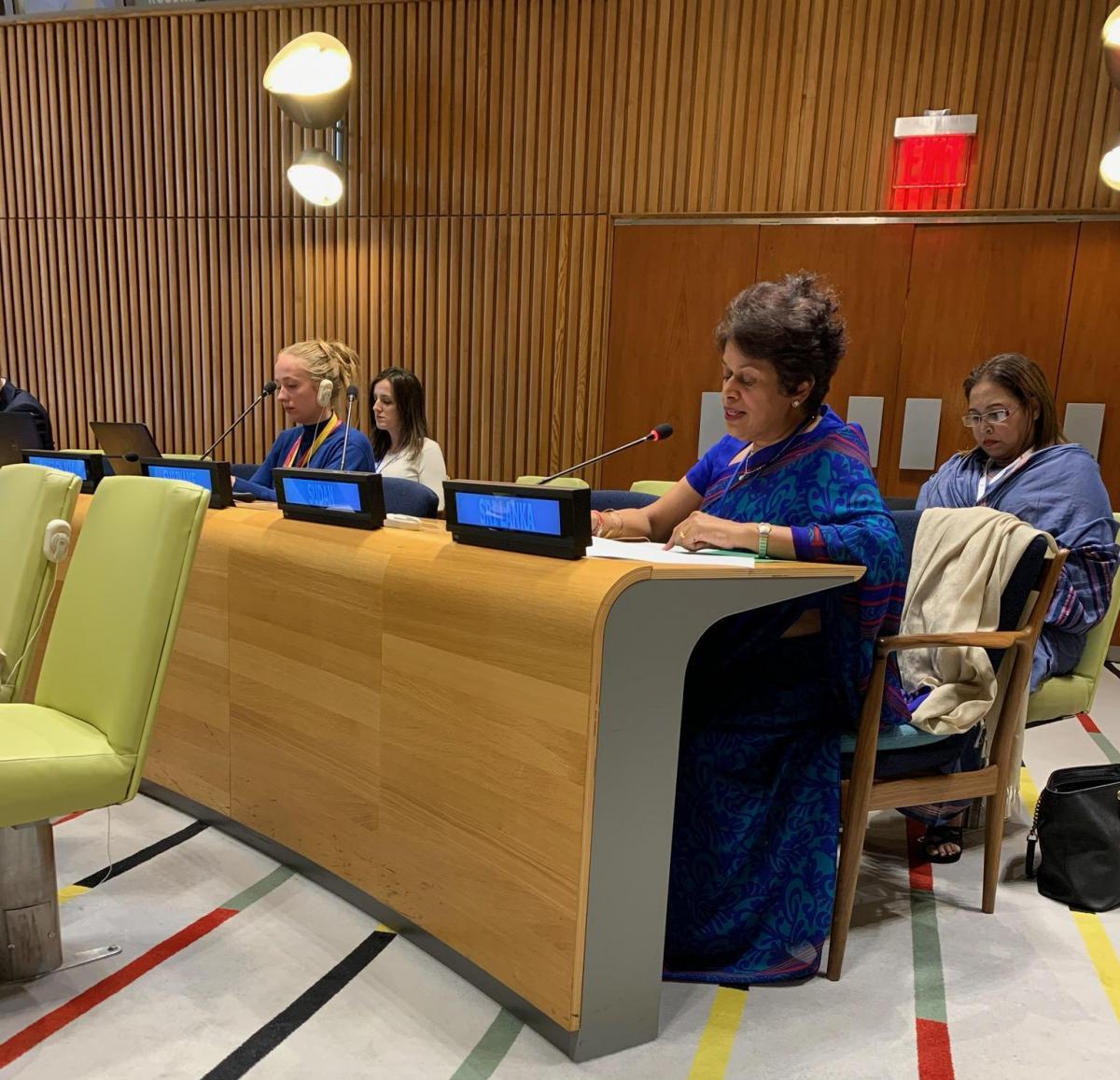 Sri Lanka notes with appreciation the Report of the Secretary General A/74/139 on Strengthening and Coordinating United Nations Rule of Law Activities, and its focus on mechanisms and practices that promote the effective implementation of international law by member states.

In keeping with Resolution 73/207 my delegation’s remarks will largely focus on the sub topic of “Sharing best practices and ideas to promote the respect of States for international law.”

In the past two decades, the world has changed exponentially. While there has been extraordinary technological progress and economic growth including many improvements in basic social indicators; many worrying factors have emerged. These include climate change, mass migration, internal displacement, transnational organized crime, terrorism and violent extremism, a rise in nationalism among a plethora of other global threats. These challenges must be met with well-considered sophisticated solutions through multilateral processes.

Therefore it is self-evident that the Rule of law and a rules based order have become even more crucial at this juncture, when such collective measures for the maintenance of peace and security have become an imperative.

In formulating multilateral responses to these challenges, governments must act under the imprimatur of the law. For the international order to also function equitably, the international community and the UN system must also adhere to the principles of sovereign equality and non-interference, the prohibition on the threat or use of force and the obligation to settle international disputes peacefully as contained in the UN Charter. Further the UN administration must give primacy to the Member States, and work within the confines of agreed frameworks, particularly on issues of dispute. UN departments must desist from resorting to punitive action against a Member State unilaterally. This is the only manner to maintain a predictable international order.

It is in this regard Chairperson, that Sri Lanka is regrettably compelled to briefly refer to a matter of questionable procedure, having experienced unjust treatment at the hand of the UN Secretariat, with the Department of Peace Operations (DPO). This situation arose in the manner in which a unilateral decision was taken and conveyed on the adjustment of Sri Lanka’s contribution to a peacekeeping operation. Further this action also violated the provision of the related MoU, bringing into question the adopted procedure. The DPO sought to link its unilateral decision of not replacing a contingent of Peacekeepers on rotation, to an internal appointment made by Sri Lanka as a sovereign right, thereby challenging the Head of State of a member country.

Such action could lead to precedent setting which all member states should seek to arrest, lest the practice becomes systemized and entrenches politicization within the UN system, while abandoning legal provisions and impeding the respect for international law in the global order. In this instance the Rule of Law was made redundant by DPO with the MoU being practiced in the breach. It is vital that Member States seek to ensure that the United Nations remains an organization that is member state driven, and that its Secretariat serves the interests of all its members in an equal manner, while upholding the basic tenets of legal provisions. This must be achieved by fulfilling the legitimate expectation of Member States that the provisions of mutually agreed upon documents such as Memoranda of Understanding are followed in letter and spirit by all parties including the UN system.

Equal opportunity to participate in the international law making process must be afforded to all states, which is at the core of the evolution of modern international law. Intrinsic to the principle of sovereignty is the Rule of Law is not a concept to be imposed on nations by external forces according to alien templates that ignore domestic realities. In order to be effective, external prescriptions must be sensitive to domestic political, social, religious, philosophical and cultural factors.

If the aspirations of all states are to be addressed adequately, international law requires a global consensus. Good faith fulfillment of obligations assumed by states in compliance with the UN Charter is thereby crucial. It is important to remember that all are equal in the application of the rule of law, in the fulfillment of obligations be it assumed by states or any other entities.

Sri Lanka having experienced over a period of thirty years, a brutal onslaught of terrorism, is conscious of the value of a nation built on the principles of democracy and the Rule of Law.

To this end Sri Lanka has taken several steps to rebuild its democratic institutions and create a framework for reconciliation based on the pillars of truth, justice, reparations and non-recurrence. Under this framework Offices of Missing Persons and Reparations have already been operationalized. A draft Framework for the establishment of a Truth and Reconciliation Commission is underway, and a Right to Information Act passed into law as part of these efforts to strengthen institutions and frameworks.

Since beginning 2015 Sri Lanka also became a State Party to the Ottawa Treaty and Conventions on the Rights of Persons with Disabilities and Cluster Munitions.

Sri Lanka notes with appreciation the focus on Anti-corruption in the Secretary General’s Report. Sri Lanka is a party to the UN Convention against Corruption (UNCAC) – which provides a universally accepted legal framework for combating corruption.  The country has adopted a holistic approach to combating corruption by targeting all relevant institutions at all levels to meet its unique challenges.

Illicit financial flows emanating from corruption in all its forms by both state and non-state actors, transnational organized crime and tax evasion all contribute to deepening social divides and sabotage genuine development and economic progress especially at national level. We are also aware that International networks with linkages to transnational organized crime are a critical lifeline for violent extremists and terrorists groups. To address this issue Sri Lanka’s Anti Money Laundering and Countering the Financing of Terrorism regime comprises provisions for this purpose.

Multilateral treaties relating to the global commons, namely; the preservation of the environment, oceans and outer space are a reflection of the spirit of cooperation among states that underscores these treaty obligations.  The diversity of systems represented by Member States should be viewed as an opportunity to find solutions in maintaining and advancing the rule of law as a tool for sustainable development, peace and security, and the realization of human rights.

Therefore, the commitment of Member States to multilateral treaties and conventions can only assist to concretize international norms and advance collective responses to global problems. This is even more vital given that the present global dynamic is becoming increasingly polarized with the ability of the collective to manage interdependence effectively, dangerously at risk.

It is also appropriate at this time to recognize the invaluable work of the principal legal organ of the United Nations - the International Law Commission in the codification and progressive development of international law and Sri Lanka welcomes the inclusion of the topic “Sea-level rise in relation to international law” in its long term programme of work.

The International Court of Justice (ICJ) must also be commended for their contribution in entrenching the rule of law at the international level both through its judgments in contentious cases and advisory opinions.

Finally, Sri Lanka draws attention to the challenges faced by developing states when it comes to multilateral treaty making processes especially with regard to insufficient financial and administrative resources. This is an area where the UN can play a crucial role by assisting States with capacity building.