Speech by H.E. Dr. A. Rohan Perera, Permanent Representative of Sri Lanka to the United Nations on the Occasion of International Mother Language Day - Permanent Mission of Bangladesh, 20th February 2016 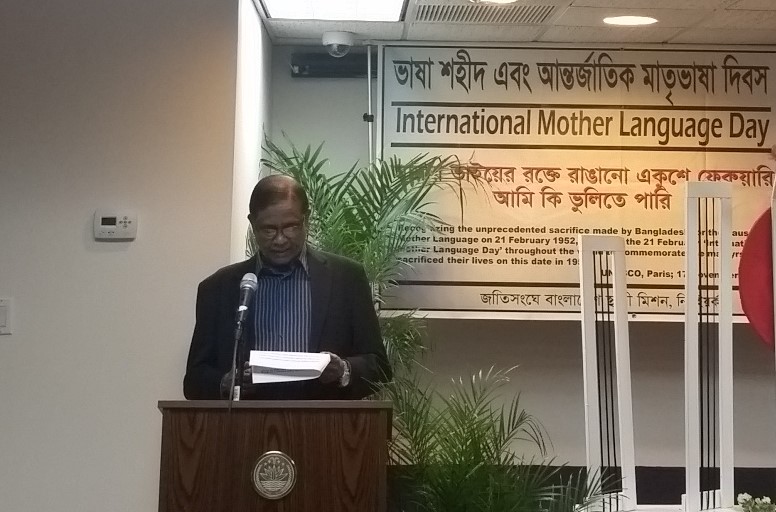 I think that these words capture very cogently the nature and impact of one’s mother language. Mother language is important to all of us. In fact, we have an inextricable connection with it throughout our lives. It is close to our hearts, and although we may speak many languages, I don’t think that we can express ourselves so freely in any of those languages as we do in our own mother tongue.

It is heartening to note that Bangladesh has taken the initiative to designate an international day for mother language. You have a very rich mother language, and I have always been enthralled by the musicality of Bangla, listening to which is an indeed a treat to one’s ears. Though I do not fully comprehend it, I feel a certain closeness when it is spoken. There are many words, which have a similar or identical meanings with my own language.  This is perhaps due to the fact that both Bangla and my mother tongue Sinhala have been derived from one single source; Sanskrit. Bangla and Sinhala being sister languages bring our two nations closer.

Renowned Rabindranath Tagore, the philosopher, the multi-faceted savant, and one of the greatest poets who wrote in Bangla has left an indelible mark in world literature. Tagore’s influence in Sri Lankan literature and music is quite marked. Many of the leading Sri Lankan musicians and performers in 1930s and 40s had studied in Shathi Nikethan of Tagore, including Ananda Samarakoon, the composer of our national anthem. Guru Tagore’s visits to Sri Lanka and his role in establishing ‘Sripali’ school of aesthetics studies, on the lines of  Shanthi Niekthan, is fondly remembered to this day.

Sri Lanka is a multilingual country. We speak Sinhala, Tamil and English. In such a situation, no language can stand alone. For thousands of years, Sinhala and Tamil languages have co-existed in Sri Lanka and they have evolved over the years borrowing from each other and enriching each other.  My mother tongue, Sinhala, has borrowed from Tamil and augmented itself with a rich vocabulary.

We have learnt through bitter experience that depriving one of the right to his or her mother language is a root cause of conflict. In this context, we have identified language as a means of bringing about communal harmony, and as a tool of reconciliation, rather than a cause for conflict.

Realizing the potential of language as a trust-builder between the affected communities from the conflict, the Tamil version of the National Anthem was sung at the state ceremony to mark the 68th Anniversary of Sri Lanka’s Independence, for the first time since early 1950s. This was a key recommendation of the post conflict Lessons Learnt and Reconciliation Commission (LLRC), of which I had the privilege to be a member.

Singing the national anthem in Tamil has already created a great deal of goodwill among our Tamil brothers and sisters.

That is the power of mother language! It appeals to one’s heart as Mandela said.

Therefore, this year’s celebration of International mother language day has special significance for us.

I am also pleased to note that today’s celebration is filled with a variety of music and singing, including by the members of the diplomatic community. I am particularly happy that a couple of officers from my Mission will also be joining their Bangladeshi colleagues performing here today.

I wish you all an extremely joyous evening.