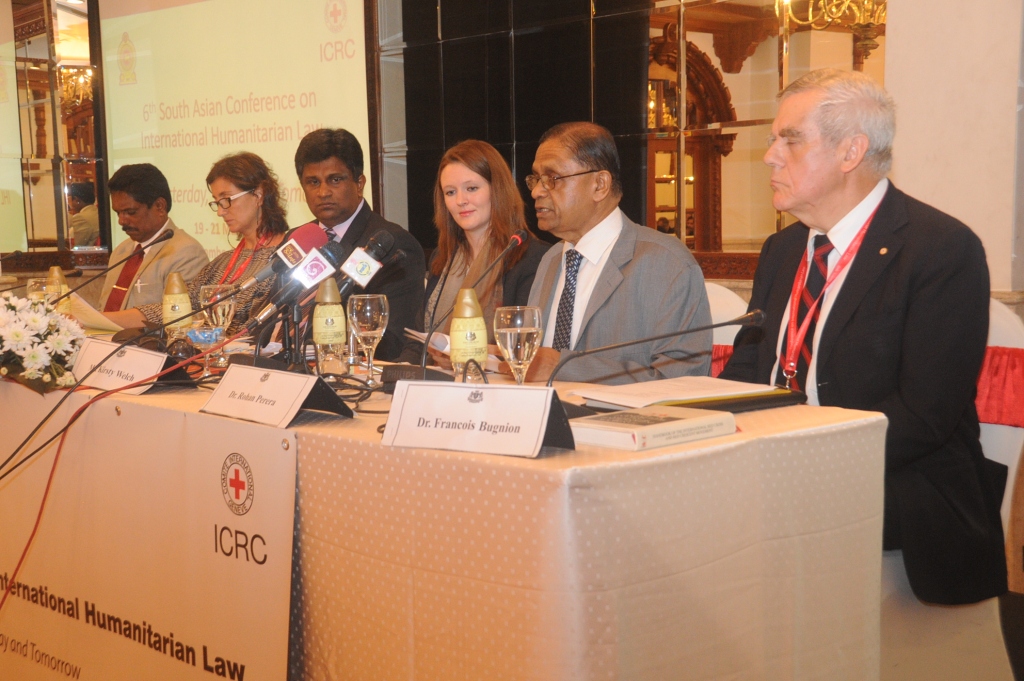 First and foremost I wish to express my profound appreciation to the International Committee of the Red Cross (ICRC) for inviting me to give the keynote address at the Sixth South Asian Conference on International Humanitarian Law.  It gives me particular pleasure since my association with the ICRC goes back to the 1980s when the ICRC was first invited to Sri Lanka and as then Legal Advisor at the Ministry of Foreign Affairs, I was closely associated with the negotiations which preceded ICRC’s presence in this country. The invaluable humanitarian services rendered by the Committee since then, in difficult circumstances amidst the ongoing conflict, is a matter of record which does not bear repetition.

The theme for the Regional Conference “IHL: Yesterday, Today and Tomorrow”, provides the participants an opportunity to discuss and identify the path that lies ahead in the development of IHL.  For this purpose, it is necessary to understand the history, the origins of this branch of law which is regarded as Lex Specialis and was evolved to govern situations of armed conflicts.  The horrors witnessed in the battle of Solferino by Henry Dunant, founding father of the ICRC marks the beginning of the historical narrative of IHL.  With this historical understanding one could view how it has evolved and how current developments have shaped the present form and content of IHL principles.  With an appreciation of the past and of the present, one is placed in the vantage position to appreciate the current challenges and the directions IHL should take in the future.

The range of topics that have been carefully selected for this Regional Meeting gives maximum opportunities for intensive discussions on the nature of challenges IHL will have to deal with in the future.   Time permitting, I will make some brief remarks about one or two of them.

As I already mentioned, IHL developed as a special branch of public international law or Lex Specialis to govern situations of armed conflict.  The conflicts were then those that were conducted between states or inter-state conflicts, carried out in the traditional battlefield with well demarcated boundaries.  The civilians were far removed from the theatre of conflict and in general, the conflict was between uniformed personnel of state armed forces.

IHL emerged with the fundamental objective of mitigating the effects of war.   This was sought to be achieved by limiting the means and methods of warfare, premised on the rationale that if war is unavoidable, nevertheless, the means and methods of conducting warfare were not unlimited.  Well established principles of distinction and proportionality and the prohibition on the use of weapons which cause unnecessary suffering and superfluous injury, are designed to achieve these fundamental humanitarian objectives of IHL.

IHL had its origins in Customary International Law, in the practice of states. Norms of conduct of warfare were embodied in military manuals of states.  The Lieber Code of the US was an important landmark in this evolution.  Customary principles of IHL later found their way into treaties, primarily the Geneva Conventions of 1949 and the two Additional Protocols of 1977 and thereafter in a series of legal instruments such as the Convention on Certain Conventional Weapons (CCW) and its Protocols and the Ottawa Convention on Anti-Personnel Mines, the Convention on Cluster Munitions, amongst many others.

From the past, let us look at the global situation today and the challenges they pose to IHL. We are witnessing a period in which the frontiers of IHL are expanding.  The present is a period where Non International Armed Conflicts (NIACs) have extended the traditional frontiers of IHL, which was limited to inter-state conflicts. Traditional Inter-state conflicts have now given way to conflicts between states and non-state armed groups, or conflicts between non-state armed groups, conducted within the boundaries of sovereign states.  The very nature of this phenomenon in present day conflicts confronts the modern state with complex demands and compulsions which requires a careful and delicate balancing of the imperatives of preservation of the sovereignty and territorial integrity of the state, whilst respecting international humanitarian obligations.

The recent phenomenon of extra-territorial spillover of internal conflicts, attracting the involvement of  third countries giving rise to what could be termed ‘Multinational NIACs’ or ‘ NIACs with a foreign element’ has compounded the nature of current challenges.

The phenomenon of Internal Armed Conflicts involves situations where the conduct of hostilities have shifted from the traditional battlefield to civilian population centers, with the civilians becoming an integral part of the ‘theatre of conflict’, often constituting  a deliberate combat strategy of non-state armed groups, resulting in an increased inter mingling of civilians with armed combatants, often fighting in civilian clothing.  This situation has been aptly described as one involving “farmers by day and combatants by night”.

Fundamental principles of IHL such as the principle of distinction, between combatants and civilians and the principle of proportionality which requires the balancing of humanitarian considerations with military necessity, come under considerable strain in such situations.

The absence of a definition of the terms “civilian” and “civilian population” and of the notion of “direct participation in hostilities” in the relevant legal texts, adds to the complexity and the sense of uncertainty, particularly, in situations where the civilian becomes a participant, either voluntarily or under coercion such as the practice of resorting to “human shields”- a phenomenon Sri Lanka experienced in its 30-year conflict.   This aspect of Direct Participation in Hostilities is now being addressed in the ICRC Interpretative Guidance on the notion of “Direct Participation in Hostilities” with a view to providing the term with a greater degree of specificity and clarity.

A challenge of a legal nature also arises for States in addressing these intricacies involved in the application of IHL in internal conflicts involving non-state armed groups. A dilemma arises in devising ways and means of addressing the issue of regulating activities of Non-State Actors who do not form state entities.  They are not parties to treaties which are subscribed to only by States.  This   factor raises the all-important and sensitive issue of the possible potential legitimization of armed groups within the rubric of international treaties.

The solution to this dilemma points towards greater adherence to customary principles of IHL in the conduct of hostilities, by all parties to a conflict and in this regard the role of the ICRC in the wider dissemination of IHL amongst non-state actors becomes vital.

Having identified the complex issues facing IHL today, I wish to focus briefly on some of the topics of particular importance that is on your agenda, which have a special bearing on the development of IHL in the future.  The topics of ‘IHL and Peace Operations; Current Challenges’ and ‘Cyber Operations in Armed Conflicts’ scheduled to be discussed later today are among those topics of vital importance in the context of the changing global scenario . It is not my intention to pre-empt these discussions.  I wish however to share some thoughts on current developments taking place in these areas within the United Nations in New York.

In the context of the violent conflicts that are taking place in different regions of the world, UN peacekeeping operations are coming under increasing strain.  These conflicts are threatening to tear apart the very fabric of sovereign states, their traditional boundaries and in most cases, state structures have collapsed. In these situations civilian lives are placed in great jeopardy.

The traditional concept of peacekeeping was in the context of inter-state conflicts and the traditional principles of peacekeeping required that these operations take place with the consent of the parties, that they remain impartial and use only  limited force, only for the purpose of self-defence.  Moreover, the early peacekeeping missions were at the invitation of the states who were parties to the conflict and the missions were utilized to observe the ceasefire along a demarcated line.

In recent times, the nature of peacekeeping operations has radically evolved in the context of the violent civil war situations we are witnessing today, particularly in the African continent, where peacekeepers are called upon to be pro-active to defend peace and give protection to civilians.  It is increasingly recognized that the evolution of peacekeeping demands that the protection of civilians in such violent conflicts is the essential component of peacekeeping operations.  In this radically changed environment peacekeepers are increasingly called upon to resort to use of force, a departure from the traditional approach to peacekeeping. In this context, it is important to understand that peacekeeping operations have today begun to embrace such diverse aspects such as conflict prevention, peacemaking, peace enforcement and peace building. The ways and methods in which IHL will apply to this changed environment is a matter that demands the urgent attention of the international community.

The topic of Cyber Operations in Armed Conflicts on the agenda for tomorrow under the head “Changing Frontline”.  New technologies of warfare, commonly called ‘cyber warfare’ underline the specificity of cyberspace as a potential method for warfare. This development underlines the particular challenges posed by cyber operations to the observance of the IHL prohibition of indiscriminate and disproportionate attacks, as well as the obligation to take feasible precautions in attack.  Enormous legal challenges are posed by remote controlled weapons systems. Existing principles of IHL do not respond to all the legal and practical challenges posed by these new technologies. There is, therefore, an urgent need to comprehensively address these issues, and to determine the manner in which IHL Principles will be applied in these situations.

It must be emphasized in conclusion that these new means and methods in warfare, unless regulated by IHL will pose a serious threat to international peace and security and a grave threat to the very survival of humanity.

I am confident that with the assistance of the expertise at your disposal, at this Regional Conference, these critical and complex issues will generate a rich and intense discussion that will make a meaningful contribution to the future application of IHL in contemporary conflict situations.

I wish your deliberations all success.