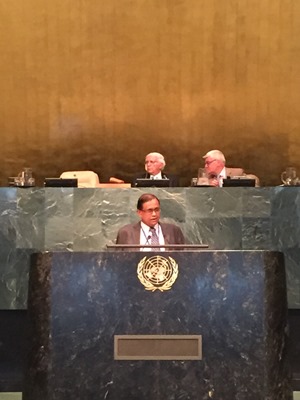 Ambassador Amrith Rohan Perera, Permanent Representative of the Sri Lanka, delivering Sri Lanka's statement a short while ago, during the fifth review of the Global Counter Terrorism Strategy, where he referred to the recent horrific events in Istanbul, Dhaka and Baghdad, and called upon the international community to close ranks and make a concerted effort to address the issue of counter terrorism, by adopting the comprehensive convention on terrorism without delay.

My delegation welcomes the statements made by the Secretary General and the President of the General Assembly during this debate on the Global Counter Terrorism Strategy Review underlining the urgent need to send a strong and unequivocal message, that the world will no more condone or countenance terrorism. The most recent events of unparalleled carnage across the globe including in our own region, in Bangladesh, and preceding that in Istanbul's Ataturk Airport and thereafter the Carnage in Iraq, even while this debate is being held in the General Assembly are grim reminders, if reminders are still necessary, of the urgent need for determined, collective and concerted action by the international community, to counter terrorism.

We extend our most sincere condolences to the families of the victims of these dastardly attacks and sympathize with those who have suffered injuries.

As a country that suffered under the yoke of terrorism for nearly thirty long years, Sri Lanka stands in solidarity with the friendly governments and the people of Bangladesh, Turkey and Iraq at this sad moment, and condemns in the strongest possible terms these heinous acts of terrorism.  These attacks, from Istanbul to Dhaka to Bagdad and elsewhere, are, as the Secretary General said, an attack on all of us, and it is indeed time for all of us to show solidarity and unity of purpose in combating this scourge. It is in this context that the Global Counter Terrorism Strategy becomes essential as a rallying call to action. All acts of terrorism are criminal and unjustifiable, regardless of their motivation, wherever, whenever and by whomsoever committed. Sri Lanka condemns terrorism and violent extremism conducive to terrorism, in all of its forms and manifestations.

As we have witnessed in the series of tragic events last week, terrorism and violent extremism conducive to terrorism is not exclusive to any one country or region, but, spreads across national borders. This rising transnational phenomenon challenges existing borders, and threatens the very fabric of the principle of sovereign states upon which the international legal order is based.

We continue to be deeply concerned over the acute and growing threat of foreign terrorist fighters (FTFs). With tens of thousands of such fighters hailing from over 100 States, it is imperative to harness global support and respond more urgently, and with more determination to these threats.

International networks with linkages to organized crime are a critical lifeline for violent extremists and terrorists groups. These are not phenomena that a single state or a few states could deal with, but rather it demands a concerted global effort. It is therefore imperative for all member states to pool their resources and share intelligence to prevent and counter this phenomenon.

We must also give due consideration to the fourth pillar of the Global Counter Terrorism Strategy, of ensuring that human rights and the rule of law are observed in these global efforts to counter terrorism. While terrorists have dehumanized us in every way, the international community should not embrace the lawlessness of the terrorist and must never abandon its common humanity, which is what binds us together in our fight against terror.  As stipulated in the Resolution on Strategy Review, this will not only betray the values we seek to uphold, but may also further fuel terrorism and violent extremism.

At the same time, terrorism and violent extremism as and when conducive to terrorism, cannot, must not and should not be associated with any religion, nationality, civilization or ethnic group. As the Resolution emphasizes, tolerance, pluralism, respect for diversity, dialogue among civilization and the enhancement of interfaith and inter-cultural understanding and respect among people are among the most important elements in promoting cooperation in combating terrorism.

In many parts of the world, violent extremism targets vulnerable and marginalized communities, children, minorities, women and girls. It is therefore imperative, that we proactively include and engage those entities of the United Nations System that deal with Children, Minorities, Women and Girls. Large number of children who were victims in the massacre in Baghdad underlines the urgency of such engagement.

As noble as these objectives are, we must also avoid lapsing into bureaucratic and cyclical practices. States must demonstrate the requisite political will and commitment to close ranks, and make a determined and singular effort to overcome this challenge, amidst the rising toll of innocent human lives around us.

We must recognize that the building blocks for a normative framework in enhancing international cooperation in these areas, are contained in the efforts undertaken by the General Assembly; in particular, the work of the Ad Hoc Committee on the Measures to Eliminate International Terrorism which has already resulted in a series of sectorial conventions on the suppression of terrorism being adopted.

I must mention in this context, that despite the support of most member states, and having been mandated by the General assembly to come up with a comprehensive legal framework, to fill possible gaps in the existing sectoral Conventions on terrorism, it is regrettable that there has been a failure to muster the necessary political will to break the current impasse surrounding the draft comprehensive Convention on International Terrorism (CCIT).

It is also pertinent at this time to recall that the conclusion of a CCIT was one of the key components of the 2006 Plan of Action to combat Terrorism.

Detailed elements of a compromise package have been before the AHC and the working group since 2007.   Search for an ideal and a perfect instrument must not become the enemy of the good and result in a collective failure of this organization and its member states.  Any legal instrument we evolve will require judicial interpretation having regard to the specificities of particular situations that arise from time to time.  Such provisions are not cast in stone, but must contain that element of flexibility of interpretation and application over time.

The role of the General Assembly over the years in standard setting has contributed markedly to the progressive development of international law and its codification. However it is time now to act as one body. Our efforts must not be one of business as usual.

It is time that all member states muster the necessary political will to conclude the Comprehensive Convention, so that the international community sends out a strong and unequivocal signal of its collective will to combat terrorism, and contributes to the effective implementation of the Global Counter Terrorism Strategy.  As one who has been closely associated with the norm creating process, since the establishment of the Ad Hoc Committee on Terrorism in 1998, let me appeal to delegations with all sincerity, that time for polemic and political debate is over – Too much blood of the innocents are being spilled, which is occurring with alarming frequency across national frontiers.  There is no time more urgent than now to make this happen.

Although much more could have been achieved, nevertheless Sri Lanka welcomes and supports the Global Counter Terrorism Strategy. We wish to express our deep appreciation to the co-facilitators of the Fifth Review of the Global Counter Terrorism Strategy, the distinguished Ambassadors of Argentina and Iceland for their efforts in this complex task and reaffirm Sri Lanka’s commitment to the effective implementation of the Strategy.