Sri Lanka was among the 171 countries that signed the Paris Agreement today (22) at the High- Level Signature Ceremony of the Paris Agreement held at the United Nations Headquarters in New York.  This high-level signature ceremony is the culmination of negotiations held amongst member states who agreed on the landmark climate deal during the 21st Conference of Parties (COP21) held in Paris in December, last year. 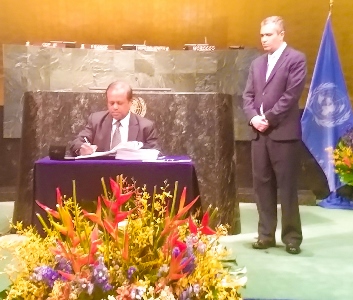 The signature ceremony is a precursor to the ratification of the Agreement by each individual state, which is the most important step to ensure that the Paris Agreement is implemented globally. Some of the goals that the historic Paris Agreement intends to achieve include the prevention of an increase in global temperature of more than 2 degrees Celsius (3.6 degrees Fahrenheit), requiring countries to set their own national targets beginning in 2020, and mandatory reporting, including non-binding transparency in implementing the Agreement.

After signing the Agreement, Minister Premajayantha delivered a national statement which highlighted the historical value the people and the Government of Sri Lanka had placed on the preservation of nature and the climate. He also recalled the launching of an economic development plan titled “Sri Lanka NEXT – Blue Green era” soon after the conclusion of COP21. In addition, the Minister referred to numerous initiatives that the government has and intends to undertake, so as to fulfil, in good faith, the country’s obligations under the Paris Agreement.

Minister of Science, Technology and Research of Sri Lanka

The ‘Paris Agreement’ is historic. It provides hope for saving our only home, this planet we call Earth, by stabilizing the climate that is essential for the sustenance of Life.

Sri Lanka is a country that has historically valued the preservation of forests and waterways. Our ancestors realised the interconnected nature of all things. They acknowledged that all actions are not without consequences – that unsustainable consumption patterns and harm caused to the environment would, in-turn have consequences for the very sustenance of life on our Planet.

With the onset of rapid urbanization and development, we shifted away from these treasured values. With rising temperatures, droughts and floods beginning to take a toll on our communities we were quick to realise the need for urgent action on climate change and the need for coordinated, joint as well as individual and collective action.

I am honoured to join the world community today, to sign this historic Paris Agreement on behalf of the President, the Government and the people of Sri Lanka.

Manifesting the importance and priority given by the Government of Sri Lanka to these issues, the portfolio of environment in my country rests under the charge of the President. President Sirisena attended the COP 21 Meeting in Paris committing personally to take action on Climate Change.

-Under this Programme, 10,000 climate resilient villages will be set up.

-Ministries have been directed to factor in GHG emission reduction in drawing up long-term plans.

-Nationally Appropriate Mitigation Actions have been prepared; and a National Adaptation Plan has been developed.

-The Cabinet of Ministers has approved the setting up of an Independent Climate Change Commission to deal with climate-related problems and issues.

-Sri Lanka is committed to fulfil in good faith its obligations under the Paris Agreement and will work as a matter of priority, towards its early ratification, after completion of requisite legislative and administrative measures.

-In this endeavor, we look to the support and assistance of the international community, especially developed country partners for the implementation of national strategies, priorities and needs with respect to mitigation, adaptation, and mobilizing climate finance.