Sri Lanka were active participants at the United Nations Conference to Support the Implementation of Sustainable Development Goal 14: Conserve and sustainably use the oceans, seas and marine resources for sustainable development held from 5-9 June 2017 at the United Nations Headquarters in New York. During the course of the Conference, Sri Lanka participated in the Partnership Dialogues and at a number of side events. 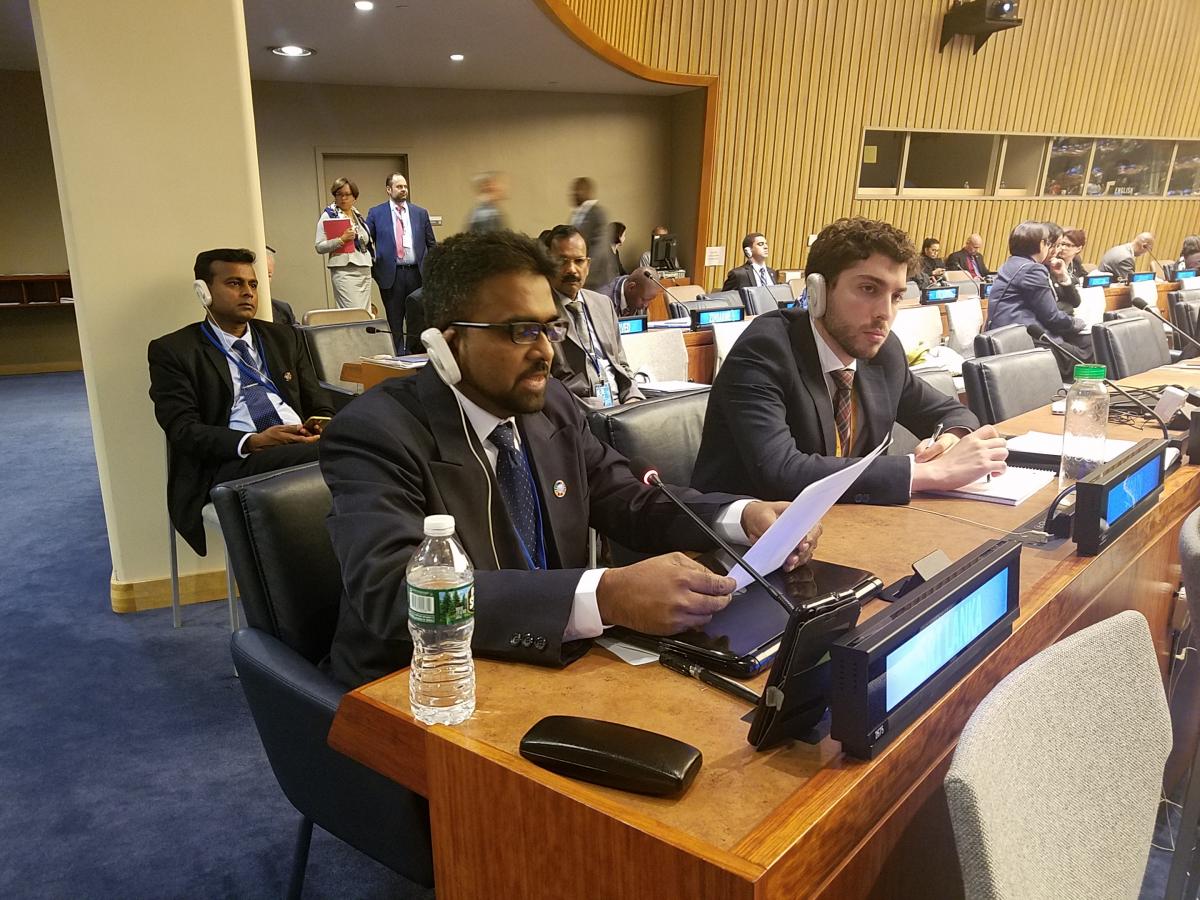 Mr. Manjula Amararatne, Director (Operations), Wildlife Department Representing Thematic Areas, delivered remarks at the Partnership Dialogue 2 on 6th June 2017, on the theme Managing, Protecting, Conserving, and Restoring Marine Coastal Environments. He spoke on the effect that marine pollution has on the protection and preservation of the coasts of Sri Lanka, especially highlighting the detrimental effects it has on marine species such as Blue Whales, Sperm Whales and the Dugong. He emphasized on the importance Sri Lanka has placed on marine coastal conservation, including by establishing special management areas to protect and manage coastal and marine ecosystems. His full remarks can be found below.

Dr. Anil Premaratne, Chairman of the National Aquatic Resources and Research Development Agency (NARA) was a panelist at the side event 'Marine Environment Pollution Challenges and Response in line with SDG-14 in South Asian Seas Region', organized by South Asia Co-operative Environment Programme (SACEP) held on 6th June 2017. During his remarks, Mr. Jamil Ahmead, Deputy Executive Director of the United Nations Environment Programme (UNEP), noted the contributions made by Sri Lanka in preserving marine life and the importance to 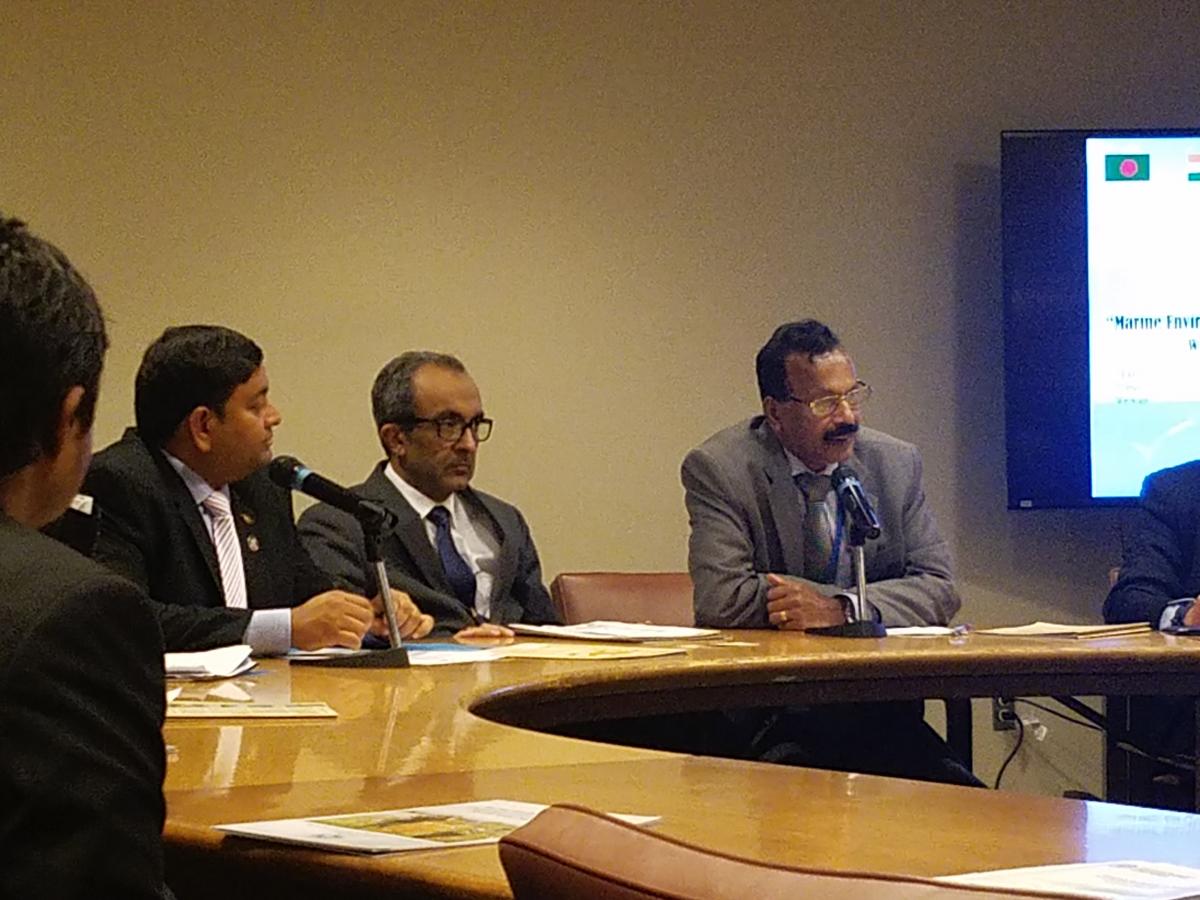 ensure that measures are undertaken in order to prevent further damage to the marine environment, especially through man-made pollution. Dr. Premaratne highlighted that Sri Lanka has established a special marine pollution prevention strategy and action plan for marine protection, and emphasized the vital role technical expertise and knowledge sharing has in order to identify sources of pollution, as often marine coastal pollution is due to debris floating in from beyond sea boundaries. Hon. Dr. Mohamed Shinee, Minister for Fisheries and Agriculture of the Maldives and Dr. Sultan Ahmad, Director, Environment and Natural Resources of Bangladesh were among the panelists. The vote of thanks was delivered by Dr. Muhammad Khurshid, Director General of SACEP.

Mr. Prabath Chandrakeethi, Director General of the Department of Coast Conservation and Coastal Resources Management, also participated at the Conference.

Sri Lanka being an Island in the Indian Ocean with a land area of 65,610 sq. km. and an Exclusive Economic Zone of 517,000 sq. km. about 8 times of the land area we consider it is opportune to be part of the UN Ocean Conference. Marine and coastal ecosystems are vital resource for a biodiversity conservation and socio economic development of Sri Lanka. Coastal ecosystems such as coral reefs, mangroves, sea grass beds , sand dunes, estuaries, coastal lagoons  and coastal wetlands serve as nursery grounds to fish species, and also play important role in providing  protection from storms and tidal waves.

The major threats to the healthy biodiversity and productivity of marine and coastal ecosystems, resulted from various human activities such as garbage dumping, illegal fishing methods, over extraction of coastal and marine resources and illegal occupations of lands. Some uncontrolled measures, such as increase of sea water temperature had destroyed the most of coral reefs in Sri Lanka

In Sri Lanka, the earliest protection of the marine environment was in 1960’s when offshore rock outcrops were declared as sanctuaries for the protection of seabirds and rock pigeons that used offshore rocks for roosting. Subsequently some of these areas were incorporated into marine protected areas that were declared under the Fauna and Flora Protection Ordinance, which is the one of the main legal instruments to protect living resources both in terrestrial and aquatic environments.

The length of the coastline of Sri Lanka is 1,620 km. The marine protected areas cover 344 km which amount to 21% of the total length of the coast of the country. The total area declared under the Fauna and Flora Protection Ordinance is 288,740 ha which includes marine areas and protected coastal lagoons. There are six Marine Sanctuaries, four National Parks and one Nature Reserve dedicated to the protection of coral reefs and seagrass meadows. Sri Lanka is currently implementing a project funded by the Global Environmental Facility for the protection of the Dugong and Seagrass meadows which will increase the protected area by an additional 10,000 ha in 2018.    By 2020, Marine protected area network of Sri Lanka will be increased by another 1000 Square kilometers,  declaring 5 new MPAs

Marine mammals including the Blue Whale, Sperm Whale and the Dugong as well as all five species of marine turtles are protected under the Fauna and Flora Protection Ordinance. In addition, several species of reef fish and marine invertebrates including all species of hard and soft corals have been protected. Furthermore, to improve conservation and minimize the impacts from tourism the Department has introduced regulations for marine mammal observation.

As the focal point for implementing the Convention on International Trade in Endangered Species (CITES) the Department of Wildlife Conservation engages closely with other government organizations including the Department of Fisheries and Aquatic Resources to ensure that threatened and vulnerable species are protected. Awareness and education plays a major role of the activities carried out by Sri Lanka to ensure the wellbeing of coastal and marine ecosystems and the protection of marine biodiversity.

Sri Lanka has established a network of special management areas to protect and manage coastal and marine ecosystems in order to generate full scale ecosystem benefits to local communities. Special management area is a participatory management approach to resolve coastal issues to associate with significant ecosystems in a specific geographic area. Local community plays a crucial role in this planning and implementation process. National Coastal zone management plan has identified 40 potential ecosystems including mangroves, lagoons and estuaries, sand dunes, coral reefs and small islands for implementation special management  area approach, Fifteen sites already been completed and target is to complete another 15 sites by 2030.

Sri Lanka,  is committed to ensure that SDG 14, goals are met through the establishment of a network of marine protected areas and improve management capacity with appropriate infrastructure, equipment and human resources.  We will adopt a multi-sector and multi-stakeholder approach to ensure the sustainability of the MPAs and species conservation efforts. Sri Lanka at this reiterates its firm commitment to the Paris Agreement and to the 2030 development agenda.

Sri Lanka, being an island in the Indian Ocean with a land area of 65,610 sq. km. and an Exclusive Economic Zone of 517,000 sq. km. about 8 times of the land area, we consider it is opportune to be part of the UN Ocean Conference. We are privileged and honoured and we thank the UN family for the initiative to protect the “Oceans or the life below water.” Sri Lanka is a party to the United Nations Convention on the Law of the Sea of 10 December 1982 (UNCLOS). Sri Lanka has ratified UNCLOS on 19 July 1994.

We are now convinced, more than ever, that the SDG process including SDG 14 made us “think differently” on the consumption and production related to the natural resource base that we value. The process also helped to “connect” the sector approaches to a multi-stakeholder and multi-sector thrust for improved synergy and minimum duplication.

The Fisheries and Aquatic Resources Act 1996 and its amendments provide the legal provisions to sustainably manage the fisheries resources in the country. Sri Lanka is party to the United Nations Convention on the Law of the Sea and has ratified the Convention on 19th July 1994 and committed to sustainable use of marine resources and the conservation and management of fish stocks.

The Coast Conservation and Coastal Resources Management Act No. 57 of 1981 as amended by Act No 64 of 1988 and No 49 of 2011provide the legal provisions to manage coastal resources including fisheries in a sustainable manner in the Coastal zone of Sri Lanka.

At present, the fisheries sector amounts to 1.8 percent of the GDP in Sri Lanka with a growth rate of 4.5 percent in 2014. The marine fishery sector has 32,025 motorized and 21,963 non-motorized crafts. The offshore fishery sector has 4,447 boats and the coastal sector amounts 27,578 boats. The total marine fish catch amounts to 86.0 % of the total fish production in Sri Lanka. The offshore fishery consists of 34.4% whilst the coastal fishery amounts to 51.6%.

Export concessions such as GSP+ by EU, demand from other international markets and increasing local demand has put pressure on the fish stocks. Having realized the importance of considering the sustainability of fish stocks, health of the marine and coastal environment for sustainable fishing, a number of positive steps have been taken, recently. For example, the Department Fisheries and Aquatic Resources Development under the purview of the Ministry of Fisheries and Aquatic Resources Development has introduced the number of regulations to be in line with the international and national requirements for the conservation and management of the coastal and marine fishery resources.

Further, Sri Lanka ratified the UN FAO agreement on Port State Measures in 2011 and was among the first 25 countries needed for the agreement to enter into force. In 2013, we agreed FAO Compliance Agreement to promote compliance with international conservation and management measures by fishing vessels on the high seas. We are also in compliance with FAO Code of Conduct for Responsible Fisheries and FAO voluntary Guidelines for Flag State Performance and have taken steps to comply with regulations of the Regional Fisheries Management Organisations and Indian Ocean Tuna Commission to promote sustainable fisheries. Sri Lanka is also a founder member of the IOTC and ratified the agreement in 1994.

Also, we have prepared a National Plan of Action in line with the FAO International Plan of Action to prevent, deter and eliminate IUU fishing. In addition, we have introduced a number of regulations to achieve multiple goals of increased fish production and food security while conserving fish stocks and maintaining sensitive coastal habitats such as coral reefs, lagoon and estuaries, mangroves and sea-grass beds.

Among the many measures taken by us are:

Realizing the importance of cross sector synergy, the Govt. agencies have started to work together on coastal and marine issues. For example, the Department of Wildlife Conservation that is the mandated organization to protect species and manage marine protected areas and we ensure that we comply with the requirements of the Convention on International Trade in Endangered Species (CITES), works with Dept. of Fisheries, Marine Pollution Prevention Authority, Coast Conservation and many others. In addition to multi-agency approaches we have realized the importance of awareness and education across all stakeholder entities ranging from fishing communities, to traders to policy makers to ensure that we maintain our marine resources for posterity.