Sri Lanka participated today at a Special Event titled "Wildlife Crime and New York Launch of the World Wildlife Crime Report” organized by the United Nations Office on Drugs and Crime (UNODC), the Wildlife Conservation Society (WCS) together with the Permanent Missions of Germany and Gabon.

In his statement, Mr. Sabarullah Khan, Ambassador and Chargé d᾽ Affaires of the Permanent Mission of Sri Lanka to the United Nations said, that while the world marked another World Environment Day on 5th June, wildlife and forests, flora and fauna are at this moment being ravaged due to transnational organized crime, impacting vulnerable communities and our fragile environment. 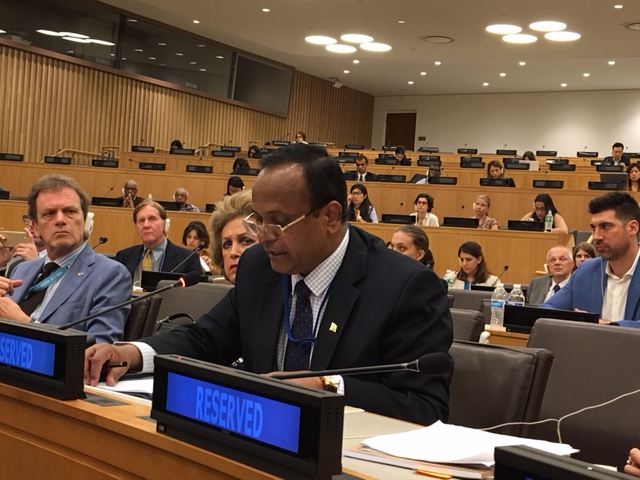 The ambassador noted that Wildlife and forest crime is today one of the largest transnational organized criminal activities alongside drugs, arms and human trafficking.

"My country stands ready to combat with utmost vigor the illegal trafficking of these products. In January this year (2016) Sri Lanka crushed and burnt its stockpile of confiscated elephant ivory comprising 359 elephant tusks. This ivory came from a single shipment weighing 1.5 tons seized in the Port of Colombo in May 2012," Mr. Khan said.

He said that In a symbolic gesture that deeply affected our entire nation,Sri Lanka accompanied the crushing of this ivory stockpile,with an observance of two minutes silence, and a religious ceremony, led by Buddhist priests, and attended by all other religious dignitaries, to formally apologize on behalf of human society, to the elephants, who were so cruelly victimized by these heinous crimes.  As one of the panelists noted it is the moral imperative that matters most he said.

Sri Lanka had strict domestic laws for the protection of flora and fauna, the ambassador also noted.