The side event, which focused on the role of the youth in boosting the promotion and implementation of the Sustainable Development Goals, was co- sponsored by the Soka Gakkai International (SGI) and the Earth Charter International (ECI).

The event was attended by a large number of youth, members of the civil society as well as representatives from the New York based Permanent Missions. 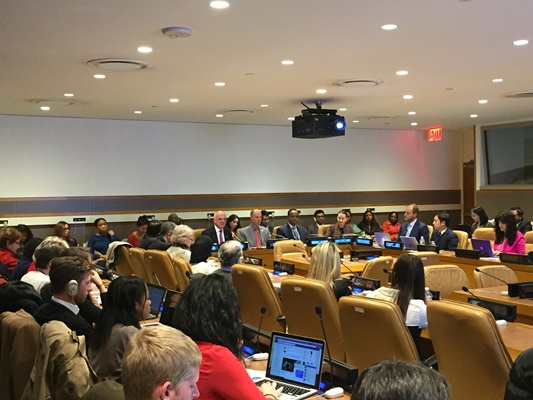 The side event, which was held as an interactive panel discussion, focused on the unique role that youth can play in realizing the vision of the 2030 Agenda for Sustainable Development, the obstacles that young people expect to encounter in playing that role and how to solve those obstacles so that youth can realize their full potential to advance the Sustainable Development Goals.

Delivering his remarks, the Deputy Permanent Representative of Sri Lanka to the United Nations Ambassador Sabarullah Khan stated that as Sri Lanka is poised to implement the 2030 Agenda at national level, it has kept women, youth, children and persons with disabilities at the centre of its national plans, in keeping with the Agenda’s key vision ‘leaving no one behind’.

He stated that youth has a unique role to play in realizing the SDGs and that the Government of Sri Lanka is well aware of this role. He added that the foremost role that youth can play in supporting the achievement of SDGs would be to bring its message to a larger global audience. Ambassador Khan observed that Sri Lanka had seen the positive effect of mobilizing youth in this awareness campaign.

He said that though there are several obstacles that affect the full involvement of youth in realizing the SDGs, those obstacles could be overcome by empowering youth through education, skills development and focus on innovation. Ambassador Khan added that Sri Lanka has developed inclusive strategies on promoting education and skills training for youth. He further stated that having realized the importance of skills development for youth, Sri Lanka was instrumental in declaring 15 July as the World Youth Skills Day.

UN Secretary-General’s Special Adviser on the 2030 Agenda Dr. David Nabarro stressed the universality of the 2030 Agenda, and emphasized that young people must be part of sustainable development. He too emphasized the significance of youth as carriers of the message of the SDGs to the world, and the instrumentality of the new technology in that process.

Special Adviser to the UN Secretary-General’s Envoy on Youth Saskia Schellekens thanked Sri Lanka for the prominent role it plays at the United Nations in advancing youth issues. She also stressed the importance of raising awareness of the SDGs and mobilizing youth for that purpose. Ms. Schellekens added that it is imperative to strengthen the Ministries of Youth as a means of empowering youth. Ms. Sofia Garcia of SOS Children’s Villages spoke on the importance of including young people in the decision making structures in respect of the SDGs.

The side event also saw the launching of the new mobile app ‘Mapting’, an interactive app developed by two youth representatives from the Soka Gakkai International (SGI) and the Earth Charter International (ECI), which aims at educating and engaging youth on the Sustainable Development Goals.