Ambassador Amrith Rohan Perera presented the credentials to Her Excellency Dame Marguerite Pindling GCMC, Governor-General of the Commonwealth of the Bahamas, as Sri Lanka’s non-resident High Commissioner to the Bahamas at the Government House, Nassau, on 13thApril, 2016.  In his remarks at the Credentials Ceremony, Ambassador Perera recalled the cordial relations between Sri Lanka and the Commonwealth of the Bahamas, the shared commonalities and the developmental challenges both countries face as developing island nations, particularly, their vulnerability to adverse effects of climate change including rising sea levels.  He reiterated Sri Lanka’s commitment to collective efforts to combat these challenges including the signing of the Paris Agreement in New York next week. 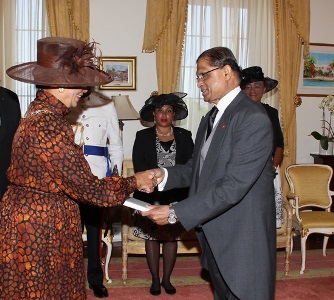 Ambassador Perera underlined the need to strengthen bi-lateral cooperation in the fields of tourism, fisheries and shipping with the experts of the two countries, identifying potential areas for specific collaboration.

Ambassador Perera also outlined the political transformation in Sri Lanka following the Presidential and Parliamentary elections in 2015 and the efforts to restore and strengthen good governance, rule of law and respect for human rights. He also referred to the on-going constitutional reform process in Sri Lanka.

His Excellency Dr. Amrith Rohan Perera, non-resident High Commissioner of Sri Lanka, presented his Credentials to Her Excellency Dame Marguerite Pindling, Governor General of the Commonwealth of The Bahamas at the Government House in Nassau on Wednesday, April 13, 2016.

Her Excellency, Governor General Pindling, in her remarks, stated that “despite the geographical distance between us, the Bahamas and Sri Lanka share many areas of interactions.  Our commonalities are seen through the principles and values of our membership in the Commonwealth, our common parliamentary democracies, and our engagements in, environmental and other global challenges”.

In conclusion, Her Excellency, Governor General Pindling requested Ambassador Perera  to convey to H.E. the President, and the Government and the people of Sri Lanka warm greetings and best wishes for lasting peace, happiness, wellbeing and prosperity.

New High Commissioner was accompanied by the Sri Lanka Honorary Consul in the Bahamas, Mr. Ravindra Jesubatham, at the presentation of Credentials Ceremony.

On 12th April, Ambassador Perera called on Minister of Foreign Affairs and Immigration of the Commonwealth of the Bahamas, Hon. Frederick A.  Mitchell and exchanged views on matters of mutual interest.

High Commissioner Perera also met with the Sri Lankan community living in the Bahamas at a dinner reception hosted by the Hon. Consul, and engaged in a discussion on a range of issues concerning them. 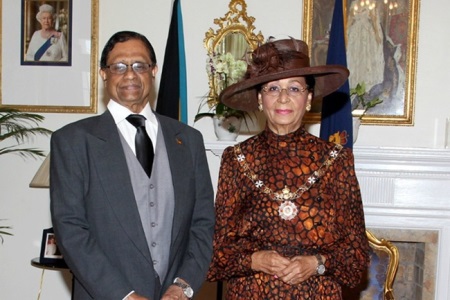 High Commission of Sri Lanka to the Commonwealth of the Bahamas,