Commemorating the occasion of 50th anniversary of the adoption of the International Convention on the Elimination of All Forms of Racial Discrimination (ICERD), the Permanent Mission of Sri Lanka co-hosted a panel discussion titled “Introducing tolerance on the internet - Changing attitudes and patterns of behavior” together with Permanent Missions of Poland, Ghana and Norway, today. The UN Department of Public information, UNESCO and African Union also took part in organizing this event. 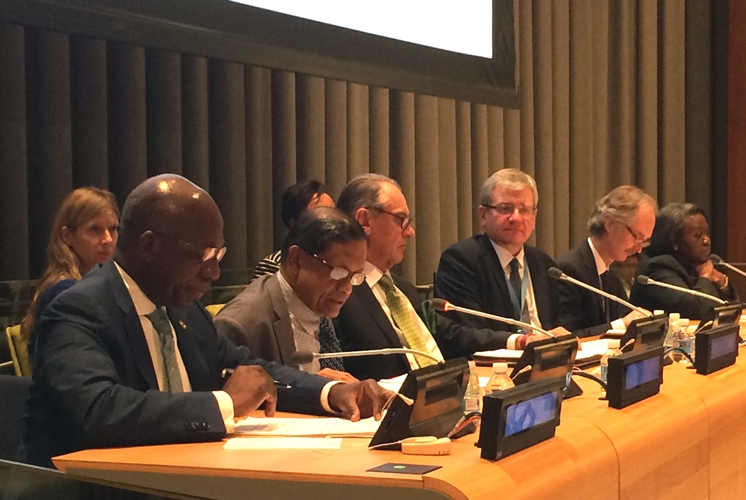 Together with the instruments constituting the International Bill of Human Rights such as ICCPR, the International Convention on the Elimination of All Forms of Racial Discrimination (ICERD) is considered as one of the key documents in the field of human rights.

The Statement made by Dr. Rohan Perera, Permanent Representative of the Mission of Sri Lanka at this event is as follows:

Statement by H.E. Dr. Rohan Perera, Permanent Representative of Sri Lanka on “Introducing tolerance on the internet - Changing attitudes and patterns of behavior”

Almost 50 years ago nations around the world came together to adopt one of the most important documents in the field of human rights,  the International Convention on the Elimination of All Forms of Racial Discrimination (ICERD)

Together with the instruments constituting the international bill of human rights such as ICCPR, the ICERD constitutes the basic framework to guarantee the basic human rights of all people, irrespective of any racial, ethnic, religious or any other consideration. Collectively, these instruments seek to preserve the inherent dignity of the human personlity.

In todays interconnected world, the Information and Communication Technology or the ICT, constitutes an important element of building a global information society. In recent discussions in the UN, to formulate a development agenda for the next 15 years, the role of ICT came to the forefront as a key enabler of sustainable development. Information and Communication Technology is a significant catalyst in economic and social development in the contemporary world, with critical spinoffs on employment generation and wealth creation. It is well recognized that widest possible access to internet would enable unprecedented economic and social gains.

While the internet thus serves the global communication platform, recent developments have demonstrated that unless effective measures are taken, for the prevention of abuse and regulation of internet, it can become a potent weapon, in the hands of divisive elements, promoting racial intolerance through hate speech.

The very title of our discussion “Introducing tolerance on the internet - Changing attitudes and patterns of behavior” conveys the gravity of the issue at hand.

Sri Lanka, a multi-racial, multi-religious society which comprises people of diverse races, religions and cultures who have co-existed over a millennia, and which recently emerged from a long drawn conflict, is acutely conscious of the danger of abuse of the internet. We are conscious of our duty as a nation, engaged in post-conflict peacebuilding, of introducing all necessary measures to ensure tolerance on the internet and the impetrative need of changing attitudes and patterns of behavior in the society, at large, particularly among the youth.

Sri Lanka has enacted far reaching laws, prohibiting cybercrime, including sexual abuse, child pornography and hate speech and is also a party to the Budapest Convention on Cybercrime.  However, a question which arises, and this I believe, is an issue that must engage our attention during the panel discussion that, is to whether the mere introduction of laws and regulatory measures are sufficient to address the phenomenon of hate speech on the internet.

What we see today in the internet is a reflection of what is happening in our societies. We need to understand that it also reflects the beliefs and attitudes of extremist fringe elements of society. This needs to be identified and addressed as the core-issue.

Therefore, in conclusion let me venture to say that apart from regulatory measures such as internet governance, it is crucial that all States take meaningful measures to enhance social values and attitudes within our societies, and focus on the role of the youth in society, as promoters of human rights, cultural diversity and intercultural understanding.

We need to project not the elements that divide us, but the ethnic and religious commonalities that binds us and celebrate the diversity of our societies.

The role of civil society, in particular the interfaith groups, is important in shaping the thinking in our societies by changing the attitudes and pattern of behavior, by introducing the notion of tolerance. The internet indeed becomes a powerful instrument in this noble endeavor. This is the fundamental aspect which cannot be over emphasized.