Ambassador and Permanent Representative Dr. Amrith Rohan Perera, in his capacity as the Chairperson of the Special Committee to Investigate Israeli Practices Affecting the Human Rights of the Palestinian People and Other Arabs of the Occupied Territories, addressed the UN General Assembly at a special meeting convened to commemorate the International Day of Solidarity with the Palestinian People, today (29 November 2016). 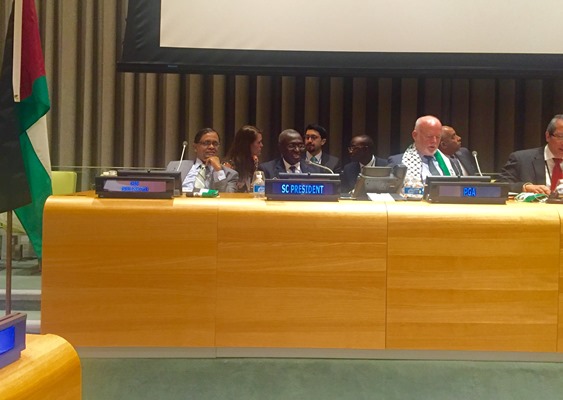 The Ambassador said that the International Day of Solidarity reminds the world of the urgent need to find a just and peaceful solution to the question of Palestine, and most importantly to address the plight of the Palestinian people, particularly its children, and to provide for their humanitarian needs.

The International Day of Solidarity reminds us of the urgent need to find a just and peaceful solution to the question of Palestine, and most importantly to address the plight of the Palestinian people, particularly its children and to provide for their humanitarian needs.

Earlier this year in Amman, civil society representatives, victims and witnesses of Israeli practices affecting the human rights of the Palestinian People, as well as Palestinian and United Nations officials, briefed the Special Committee on the situation of human rights within the occupied Palestinian territories and the occupied Syrian Golan.

These briefings and testimonies once again brought to the attention of the Committee the daily violence and humiliation suffered by Palestinian men, women and children, whose every aspect of life continues to be controlled by the unlawful occupation.

Settlement expansion has had a direct impact on the escalation of violence in the occupied territories and has largely contributed to the increase in the number of civilian casualties that include infants.

According to information placed before the Special Committee, many of these incidents involved attacks reported to have been perpetrated by young Palestinians, or during security raids into the homes of Palestinians suspected of involvement in these attacks. However, a significant number were also reported to have taken place in the context of clashes between Palestinians and the occupying security forces. These numbers speak for themselves and illustrate the scale of the violence confronted on a daily basis by Palestinian men, women and children.

The Special Committee viewed the video footage of the killing of the Palestinian man, Abd Al-Fatah al-Sharif in Hebron in March this year. Sadly this was not one isolated incident, but the most publicized following the uploading of the video on YouTube. The Palestinian Commission of Detainees and Ex-Detainees has reported at least 17 separate cases of alleged extrajudicial executions, including of children, carried out by the occupying forces since October 2015. The Special Committee appeals to the parties concerned to act proportionally and with restraint, in accordance with the United Nations Basic Principles on the Use of Force and Firearms by Law Enforcement Officials.

We must remain deeply concerned of reports that dozens of families of Palestinians killed have been denied the right to a proper and dignified closure on the basis of ‘security concerns’. While many of the bodies have now reportedly been released, conditions have been imposed regarding the release of bodies, such as the prohibition of autopsies and limitations on funeral rites.

According to testimonies before the Special Committee, Israeli practices have also included state-sanctioned land seizures, retroactive legalization of outposts, demolition of Palestinian homes and livelihood structures, denial of Palestinian building permits, restrictions of movement or access to livelihoods, or lack of accountability for settler violence.

Year after year, for the best part of a half-century since the establishment of the Special Committee, the information received by the Committee has affirmed the trends and patterns of human rights violations associated with the occupation and its inextricable link to settlement enterprise.

Israeli authorities have also reportedly demolished or sealed at least 37 homes since October 2015 to punish relatives of Palestinians who attacked Israelis or were suspected of such attacks leaving dozens of innocent Palestinian families and their children homeless and displaced. These punitive demolitions and other punitive practices constitute a form of collective punishment, which is a clear breach of international law and must be brought to an end.

An emerging issue of particular concern brought to the attention of the Special Committee has been the threats and intimidation against human rights defenders and non-governmental organizations, particularly local Palestinian and Israeli organizations, working to promote human rights in the occupied territories.

An estimated 700 Palestinians are reported to be held under administrative detention without charge or trial, for an indefinite period of time. These administrative detainees must either be released without delay, or promptly charged or prosecuted with all the judicial guarantees required by international human rights law and standards.

The Special Committee’s report also covers the situation in Gaza, where Israel’s land closure and naval blockade has now entered its tenth year. Two years after the most devastating escalation of hostilities, an estimated 85,000 Palestinians remained displaced. Reports indicate that there has been chronic de-development over the past nine years, with per capita incomes up to 30 per cent lower than in 2005.

According to the report of the Special Committee, unemployment in Gaza stands at 38.4 per cent, with youth and women’s unemployment at a staggering 60 per cent and 84 per cent respectively. The economic situation has not been helped by Palestine’s state of energy dependence, and Israel’s exploitation of its natural resources, including oil and gas which is also covered in the said Special Committee report.

While we here today, pledge our solidarity to the people of Palestine, I wish to acknowledge with deep appreciation the work done by UNRWA and for the tireless efforts taken by the Agency, to provide care and deliver vital human development services and emergency assistance, to some 5.2 million Palestine refugees in all fields of operations in the Gaza Strip, West Bank, Jordan, Lebanon and the Syrian Arab Republic, since 1950.

In the face of such misery, UNRWA’s support has been invaluable in maintaining schools and educational infrastructure in the occupied territories that are of crucial importance in order for Palestinian children and youth not only to turn away from violence, but also to inspire in them hope for the future even in such dire circumstances.

As Chair of the Special Committee I repeat the call for a just and lasting solution to the question of Palestine and an end to the suffering of the Palestinian people.

Both parties to the conflict must create the necessary environment to facilitate peace. There is an urgent need for mutual confidence-building measures in support of efforts to resume dialogue and substantive negotiations. Israel must protect the Palestinian civilian population in the Occupied Territories and desist from actions that are contrary to the established rules of international law and practice.

We reiterate our support to the implementation of UN General Assembly Resolutions regarding the inalienable rights of the Palestinian people to Statehood, and the attainment of a two state solution based on 1967 borders.

We are encouraged that despite decades of disappointment, the people of Palestine have resolutely sustained their spirit and the strength of purpose to gain their legitimate rights and have prevailed over the considerable challenges facing them. We hope that the Palestinian people will work together to preserve national unity which is imperative for the creation of a fully sovereign, independent Palestine.

Every day the resilience and endurance of the people of Palestine inspire us.

Surely it must also energize and motivate us to act now. This is not a fight they can fight alone. It is a fight we must fight together as a global community.