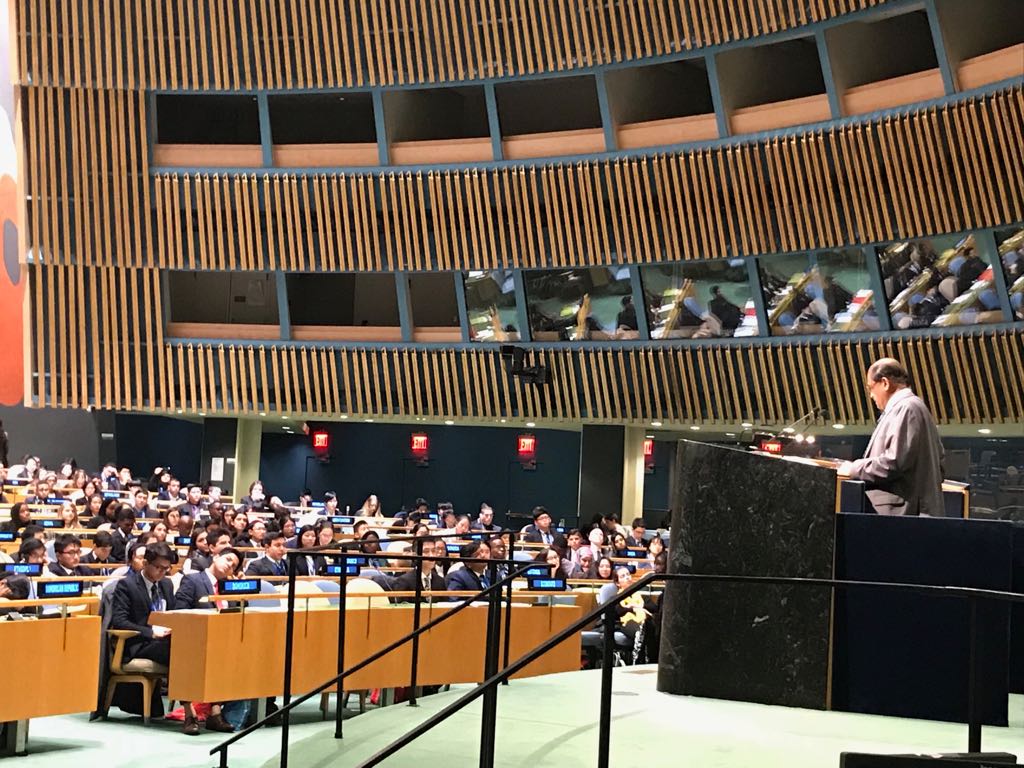 It is my pleasure to welcome you all to this opening of the International Model United Nations, organized by the World Federation of United Nations Associations (WFUNA).

The theme for this year; ‘SDGs and Sustaining peace’ touches upon two of the most important and critical topics being addressed at the UN today. Therefore, your discussions over the next four days are very timely and relevant.

The world today is facing uncertain and unsettling times. The complex, inter-related crises of climate change, human displacement, and natural disasters affect the world on a broader and more accelerated scale than ever before. These challenges call for the international community to collectively address them. However, just when the importance of multilateralism is being accentuated, its foundations are being challenged. In an unsettling environment of hostility and mutual suspicion, the role of the United Nations continues to be more important than ever. The United Nations remains a compelling embodiment of the values of multilateralism, a steadfast platform on which the international community can come together and work collectively towards the vision of a world that is more safe, sustainable and secure.

As young delegates about to engage in the process of debate and resolution writing and negotiating, you will undoubtedly encounter the concept of ‘consensus building’, a cornerstone of multilateralism. It signifies the process of taking time to listen and engage with viewpoints that are different to our own and work to reach compromises in the path forward towards a common vision. This is a central pillar of the United Nations and the multilateralism that it embodies. However, we note that there is an increasing trend towards adoption of resolutions, including resolutions on critical socio-economic issues, by a recorded vote. This also signifies a gradual weakening of ‘consensus building’ in the negotiations process of these resolutions. I, therefore, urge you to attempt to actively engage with conflicting viewpoints and reach consensus, in the mock negotiations at this model UN.

As you are undoubtedly aware, one of the primary ways in which the United Nations is currently working towards this vision is through the framework of the 2030 Agenda, or the Sustainable Development Goals. The seventeen goals that are set out in the Agenda delineate targets and indicators mapping a transformational course for development.

The sustainable development agenda and the SDG’s are intrinsically interconnected to the vision of a sustained peace. At the UN, the framework of sustaining peace is founded on the concept of peace building. Around two decades ago, the process of ‘peace building’ was understood in the UN as post-conflict mechanism, which is a time bound process. However, the concept has since transformed to focus on all stages of a conflict cycle, before, during and after any armed conflicts across the globe. Sustaining peace now focuses on the importance of having a long-term, comprehensive vision in the responses to violent conflict, to end vicious cycles of lapse and relapse. This transformation of the UN peace building architecture allows for peacebuilding efforts to take place even when there is no conflict taking place. In addition, it allows for the involvement of a broader group of actors with the peace and security agenda. And one of these key groups is young people, like yourselves.

In December 2015, the UN Security Council unanimously adopted Resolution 2250 (2015) on Youth, Peace and Security - a resolution which recognized, for the first time, thesignificant and powerful role that young women and men play in the prevention ofconflict, in peacebuilding and in the maintenance of international security. At a time when youngpeople have been portrayed as a group particularly vulnerable to forces of violent extremism and radicalization, this resolution made a contrary and powerful assertion that young people, should not solely be seen as a part of the problem, but be incorporated as a part of the solution. The solution should be focused on several primary areas of youth involvement and rights including youthparticipation, protection of youth, measures for the prevention of youth being involved inviolence, creating partnerships for youth involvement, and disengagement and reintegration of youth affected by armed conflict.

Therefore, it is evident the role of youth is firmly engrained in the UN’s peace and security agenda, and it is also highlighted in the achievement of the Sustainable Development Goals. Thus, the time has never been more apt for young people to make their voices heard, and take part in creating a world that is more inclusive, tolerant, and united. As you participate in your Model UN discussions in the next few days, I urge you to consider your role and your contribution in making this future of unity, peace, and prosperity possible.  As Secretary General Antonio Guterres recently stated at the UN, “we need greater unity and courage – unity and courage to meet today’s most urgent needs, to ease the fears of the people we serve and set the world on track towards a better future.” In realizing this vision, the youth of today has a central role to play.

I wish your event all success.