Minister of Women and Child Affairs, Hon. Chandrani Bandara Jayasingha delivered a statement today (15th March 2016) during the general discussion of the 60th Session of the Commission on the Status of Women. The priority theme of this year’s CSW60 is ‘Women’s Empowerment and its link to sustainable development.’ In her statement, Ms. Jayasingha noted the importance of empowering women in order to ensure the successful implementation of the 2030 Agenda on Sustainable Development. Her full statement can be found below. 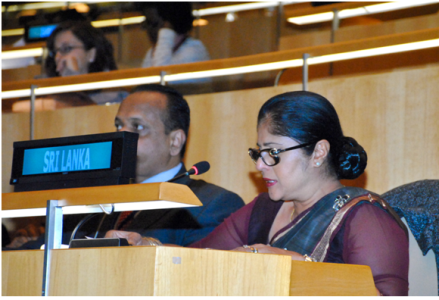 Minister of Women and Child Affairs, Hon. Chandrani Bandara delivers her statement at the 60th Session of the Commission on the Status of Women, United Nations, New York 15th March 2016 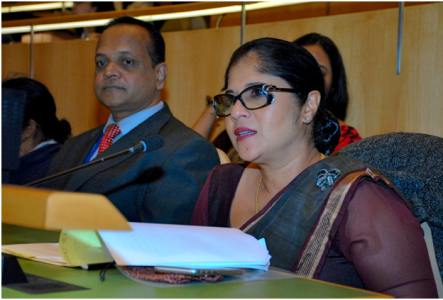 Minister of Women and Child Affairs

My delegation and I are honored to be here today, at the 60th Session of the Commission for the Status of Women, at this crucial time, when the international community has begun its fifteen-year journey, to implement the Sustainable Development Goals.

This Session of CSW is doubly important, because it is the first session, after the adoption of the new 2030 Agenda for Sustainable Development. Thus this session will set the stage and create the momentum for our way forward.

My delegation congratulates you on your appointment as chair of the 60th Session of CSW, and assures you and your bureau, of Sri Lanka’s active participation and support, over the next two weeks and beyond.

We also commend the efforts of the Secretary-General, and the timely submission of the two reports under the priority and review themes identified for this 60th session, namely; “Women’s Empowerment and the Link to Sustainable Development”, and, the “Elimination and Prevention of All Forms of Violence against Women and Girls”.

The contents of these reports will serve as a launching pad, and enrich our discussions as we evaluate our commitments made in September 2015, and take steps to ensure, that we evolve development processes that are people-centered, gender-sensitive, respectful of human rights, and  focus on the marginalized, the poorest and most vulnerable among us; Indeed, that we leave no one behind.

Each of us will have our own set of challenges as we begin to integrate the SDGs into our national plans and policies, strengthen national capacities, national data systems and evaluation programs, so they track the range of SDG priorities in a clear and effective manner.

Since the endorsement of the Beijing Platform for Action, the government of Sri Lanka, has been working towards achieving gender equality for women in all spheres and sectors, by introducing law reforms, policy implementation, and mainstreaming gender-related priorities into government action plans.

This has been made easy, as the constitutional, legal and administrative framework, recognizes and supports gender equality and women’s empowerment, which is addressed by international covenant,s specially the Convention on the Elimination of All Forms of Discrimination Against Women (CEDAW).

Sri Lanka focuses on three priority areas that focus on women’s empowerment, namely: (1) women’s economic enhancement, (2) the elimination of violence against women; and (3) women’s engagement in public and political life.

There are several government programs in operation, to improve the livelihood of the people, by strengthening the family economy, reducing regional disparities, and improving infrastructure facilities through people-centric development. I’m happy to note, that the Cabinet just last week, approved my ministry’s request, to set apart at least 25% of allocations given to projects for rural economic development, for the economic enhancement of women.

One of the key target groups in our empowerment programs are female-headed households including war widows, who constitute over 23% of the total female population in Sri Lanka. My Ministry has disbursed more than 100 million Rupees towards their socio-economic upliftment; to ensure their well-being and protection, and to uphold their rights and promote skills and capabilities. For instance providing low-interest loans. A National Secretariat for widows and women-headed households was established late last year, in the former conflict area, to serve the target groups better.

My country has addressed the issue of Violence Against Women using three approaches: (1) Prevention (2) intervention and (3) advocacy for the formulation of policies and laws. There is an elaborate state structure working to address violence against women, stemming from the community level to national level which provides legal aid, counselling and shelter to the victims.

A toll free Help line has also been established in my Ministry to receive complaints, and provide redress to the victims through referral services. Committees to address sexual harassment in the workplace have been established in the line Ministries. Awareness creation programs conducted by state and civil society organizations have helped to increase the reporting of incidents. A National Policy Framework and National Action plan on Gender Based Violence (GBV) has been prepared with UNDP assistance, covering eight ministries.

Following elections last January Sri Lanka’s new administration has renewed its commitment for democratic principles of Good governance and Rule of Law. As part of this commitment the new administration has made great strides in addressing post conflict issues. Reconciliation mechanisms are already underway in our country. Sri Lanka endorsed the 2013 Declaration of Commitment to End Sexual Violence in Conflict and on 12 January 2016, we re-iterated this Commitment, noting that it was critical to peace, security and sustainable development.

Last year, on 6 March 2015, the Government approved a set of recommendations presented by the Prime Minister on ‘Preventing Sex and Gender based Violence’.  These recommendations included, formulation and enforcement of laws to combat violence against women and girls and introduced social protection measures.

Consequent to the change in administration and the commitment to end impunity and rebuild civic trust, Sri Lanka’s once vibrant civil society has been revitalized and reenergized. Sri Lanka’s women activists are currently conducting grassroots level peace building and reconciliation activities, including in the former conflict affected areas. Our administration is encouraging more women to take on such initiatives.

In light of the broad policy stance reflected in the UNHRC resolution of October 2015 co sponsored by Sri Lanka, the government has initiated a victim centered National Consultative process entirely driven by civil society.

These victim centric public consultations will be completed within three months of the commencement of the process, and the government has appointed an ethnically and gender diverse 11 member task force from civil society, (of which 6 members are women) mandated to consult stakeholders on the design of the reconciliation mechanisms.

The task force and its secretariat are empowered to mobilize and deploy the resources and powers of the state including line ministries, government agents etc.

These mechanisms and processes for national unity and reconciliation will be developed under the overall guidance of the Office of National Unity and Reconciliation (ONUR) headed by former president Mrs. Chandrika Kumaratunge (daughter of the first woman prime minister of the world) who will advise on consultative steps to be followed, whilst also commencing innovative conflict building interventions that would later be institutionalized and scaled up.

The envisaged activities include the implementation of peacebuilding projects which involve joint programming by the UNDP with agencies such as UNICEF, UNFPA, WHO and UN Women to implement the joint UN Programme on Preventionof and Response to Gender-based Violence in Sri Lanka funded by UN Women.

However, while Sri Lanka does well on gender issues we still have many challenges to overcome. Despite the fact that women have excelled in the field of education, the labor force participation rate has never reached 40 percent. Around 60 percent of women are in the informal sector which is not included in labor force data, and we are in the process of formulating policies for the protection of women in the informal sector, especially focusing on social security, equal wages and securing the rights of domestic workers.

We are happy to note that more women continue to enter employment areas that were hitherto either dominated by men, or were the exclusive domain of men, including the judiciary, company directorship, banking and engineering fields. Women’s participation in agriculture, industries, and services sectors, is on the increase as well, while women outnumber men in the agriculture and services sectors.

The migration of women as domestic workers is on the decline after imposing a minimum age limit of 25 years and not encouraging mothers with children under the age of 5 years to proceed to domestic work abroad. In this regard, we are also in the process of working with host countries on crafting better working standards and ensuring the protection of women. The Sri Lanka Bureau of Foreign Employment has developed more focused programs for returnee women migrants, encouraging them to channel their savings for self-employment and economic ventures.

Another remarkable achievement in the last year, is the amendment made to the Local Government Election Act that has ensured the allocation of a 25 percent female quota for women. This will come into operation at the forth-coming elections to the local government bodies. A request for a quota for women in Parliament and the Provincial Councils has been included in the submission made by civil society organizations, to the Constitutional amendment Committee.

However, despite these achievements, Sri Lanka still has a long way to go to achieve gender parity by 2030. Patriarchal attitudes, insensitivity towards gender, and lack of financial resources, have impeded our efforts in realizing gender equality and empowerment of women.

The introduction of Sustainable Development Goals and the inclusion of a separate goal on gender, and the fact that gender is a cross cutting factor in all the goals will no doubt help capture the remaining gender gaps.

Sri Lanka acknowledges the fact that eliminating human deprivation and disparities in human progress is at the heart of the Sustainable Development Goals. Sri Lanka has had a stellar record with regard to the Millennium Development Goals, and we intend to continue that momentum in achieving the SDGs. We will strive to put in place mechanisms to achieve gender equality 50:50 by the year 2030.