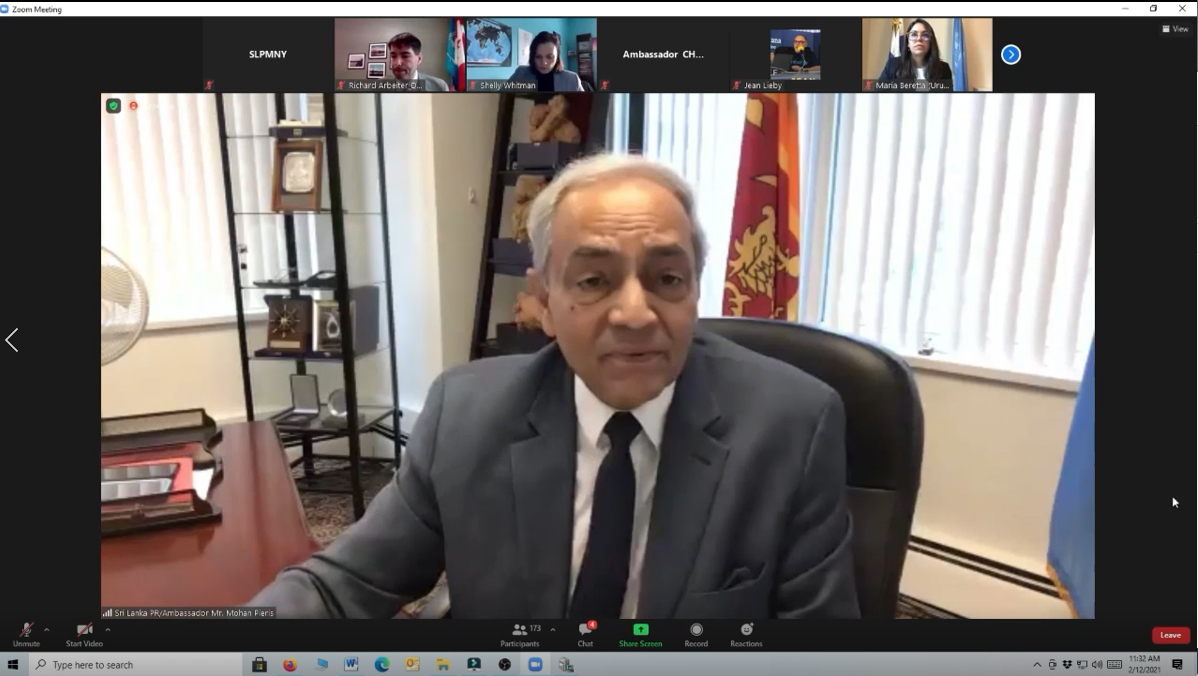 International Day Against the Use of Child Soldiers

Virtual Event titled “Early Warning to Early Action: Implementing the Vancouver Principles to Prevent and End the Recruitment and Use of Child Soldiers”

As you would all know, Sri Lanka experienced the sad phenomenon of child soldiers at the hands of a group of non-state actors that terrorized the country for nearly 30 years. Following the neutralization of this group in 2009, the Government of Sri Lanka undertook the substantial task of rehabilitating these children and reuniting them with their families. I would now like to show a few photos that depict the rehabilitation programme conducted by Sri Lanka for the ex-child soldiers, where we treated these children like our own children and apart from the formal education, they had the opportunity to attend scouting programmes and even some radio programmes at a media institution.

I must refer to the mandates and early warning chapters in the Vancouver Principles which opens up a wide window of scenarios. We cannot be heard to turn a blind eye to some of the activities of these non-state actors who as we speak are engaged in the very activity which we are seeking to stop. I will briefly show you some photographs which depict the use of child soldiers and is being used to promote the idea of hate and terror. In one picture, as you see children dressed in combat uniforms carrying replicas of rocket launchers missiles and guns. This is a lovely play! This is not Cinderella or Jack & the Bean Stalk or Little Red Riding Hood but promoting hate, little children carrying replicas of bazoocas and all kinds of weapons. In the other, school children as young as 8 years is enacting a drama dressed as suicide soldiers. Here is another one of glorification of child soldiers, in another little skit. These pictures speak a volume.

We all know the modus operandi of such groups and I do not wish to get in to that here. But I think it’s important to highlight that while the actual child soldiers created by this group were physically in Sri Lanka, they were being aided, sponsored and glorified by segments of the diaspora abroad. Unfortunately, we have witnessed children living thousands of miles away from Sri Lanka taking part in ceremonies that glorified child soldiers and to raise funds for this group of non-state actors. The modus-operandi included the use of schools, particular in foreign countries, ostensibly for the purpose of imparting knowledge on culture and language to diaspora children. Under the fine and laudable cover of teaching the younger generation their culture and values, something far more sinister and scaring was being carried out and that is the brainwashing of small children into a state of hate of nationalities they are falsely made to believe were antagonistic to them. We have found that some of these institutions had very close associations with this group of non-state actors and were actually their front organizations and were being used to propagate their illegal activities overseas as well as a source of income. Indeed, in Europe alone there were more than 350 such institutions with nearly 20,000 students.

Some of the activities of the diaspora are depicted in these photos – innocent looking concerts and plays by little children who are compelled to re-enact the grim and sad story of child soldiers on a mission to kill their brothers and sisters. My dear friends what are we in the international community doing about it? The answer is very little, but an avalanche of rhetoric and passively allowing the glorification of terror. This has gone on unabated and un-noticed and has led to the systematic radicalization of Tamil youth. It is evident that systematic psychological conditioning of students to become martyrs and terrorists started with this group of non-state actors long before it manifested itself in Islamist madrasas.

This is extremely unfortunate, and continues even today. It is important that in our efforts to combat this gruesome ordeal we do not forget the sophisticated mechanizations of various non-state actors to further their cause of terror.  Our efforts to move forward on these issues must ensure that we do not allow them to use the same procedures that we use to foster and propagate our ideals of humanity at the UN for their own purposes.

Most often children end up a numerical notation on international podiums, and scant regard is paid as to why children are made to carry arms and under what circumstances they become victims of movements that would do anything to ensure that their agendas are realized. The Vancouver Principles are something that is long overdue for the reason that nothing constructive has been done internationally to put an end to these children’s misery.

I will end by citing a grim warning from scripture about protecting children when Christ said “if anyone causes one of these little ones to stumble it would be better for them to have a large millstone hung around their neck and be drowned in the depths of the sea. Woe to the world because of the things that cause people to stumble! Such things must come; let woe to the person through whom they come.” The sophistication of our treaties will not suffice unless and until we act true and fast. The Vancouver Declaration will be a stepping stone in the right direction.