The Permanent Mission of Sri Lanka to the United Nations in New York conducted traditional Ifthar (Breaking Ramadan Fast) on Wednesday, June 14th with the participation of a large number of Sri Lankan Muslim expatriates living in the Tri-State area of the United States (New York, New Jersey & Connecticut). The programme was held at the Mission premises and included welcome address by Dr. A. Rohan Perera PC, Ambassador and Permanent Representative of Sri Lanka to the United Nations, religious speeches, Maghreb prayer and breaking of fast with Sri Lankan cuisine followed by dinner.

In his welcome address, Ambassador Rohan Perera noted that the Sri Lanka Muslim community has been maintaining admirable harmony with people of other faiths for several centuries and have had remarkable patience during testing times.  Referring to the recent press statement by the Cabinet of Ministers, he mentioned that the Cabinet of Ministers in Sri Lanka at their meeting on 13th June 2017 have resolved to guide our nation towards reconciliation, sustainable peace and economic progress. He further added that the Cabinet of Ministers has denounced in strongest terms the recent incidents of violence targeting places of religious worship, shops and business enterprises and houses, and that the Cabinet of Ministers have also directed the law enforcement authorities to immediately take all necessary steps in accordance with the law of the land, against instigators and perpetrators of violence and hate speech targeting any religious and ethnic groups in the country.  He also mentioned that by truly adhering to the teachings of Islam one could spread peace around, which would help to reconcile with others and underlined the need to avoid extremist ideologies.

Sheik Dr. Mohamed Shafiek from New Rochelle delivered an Islamic sermon and led the prayers, in the course of which he highlighted the significance of Ramadan and its essential character of inclusivity.   Mr. Mohamed Nayeem announced Adhan for the Maghreb prayers.  Deputy Permanent Representative Mr. Sabarullah Khan delivered the vote of thanks at the conclusion of the programme. 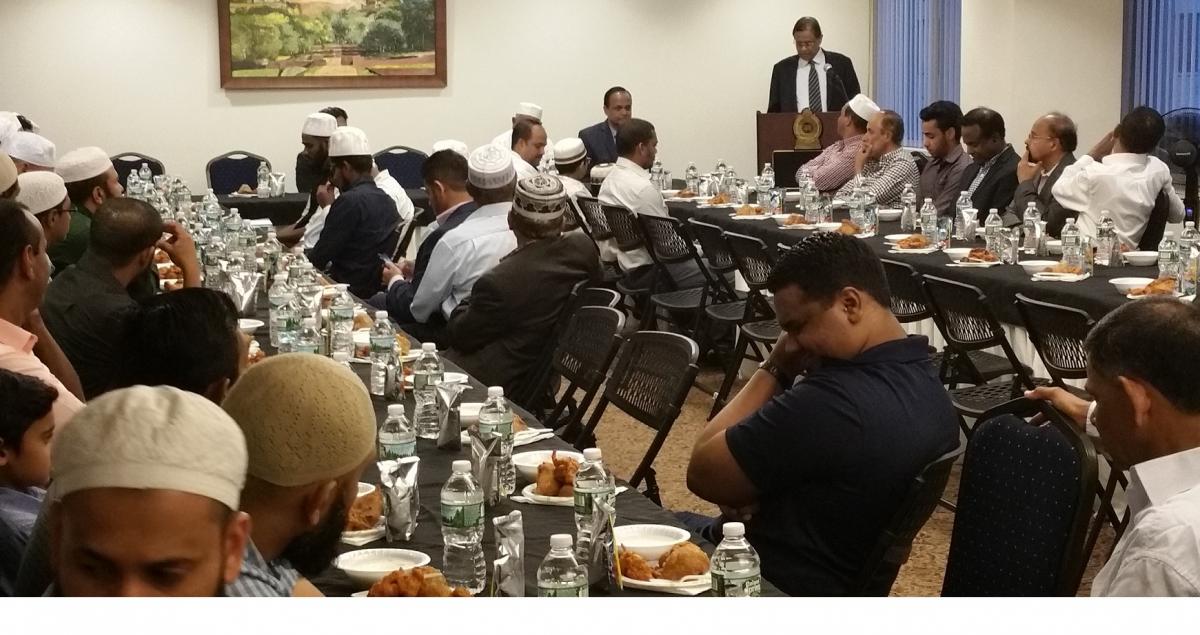