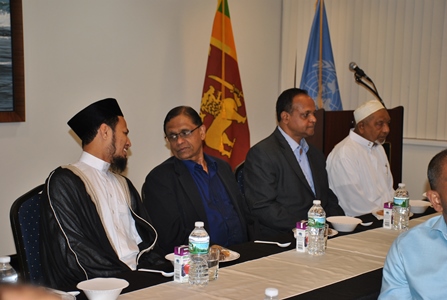 The Permanent Mission of Sri Lanka to the United Nations in New York conducted traditional Ifthar (Breaking Ramadan Fast) on Friday, June 17th with the participation of a large number of Sri Lankan Muslim expatriates living in the Tri-State area. The programme was held at the Mission premises.  The programme of the event included welcome address by Dr. A. Rohan Perera, Ambassador and Permanent Representative of Sri Lanka to the United Nations, religious speeches, Maghreb prayer and breaking of fast with Sri Lankan cuisine.  Mr. A.S. Khan, Deputy Permanent Representative, in the introductory remarks, mentioned that Sri Lanka Missions in various countries arrange annual Ifthar programmes which brings together the Mission staff and members of the Sri Lankan expatriate Muslim community. 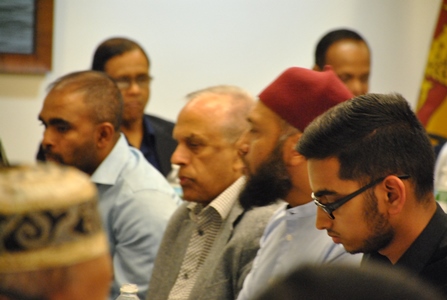 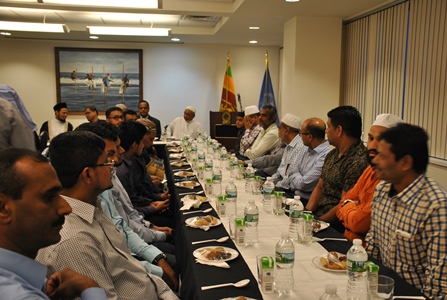 In his welcome remarks, Ambassador Perera noted that in Sri Lanka, there is a very vibrant Muslim community, which has been actively contributing to every aspect of the nation and that they have been maintaining admirable harmony with people of other faiths for several centuries.  He also mentioned that by truly adhering to the teachings of Islam one could spread peace around, which would help to reconcile with others, while being at peace with oneself. 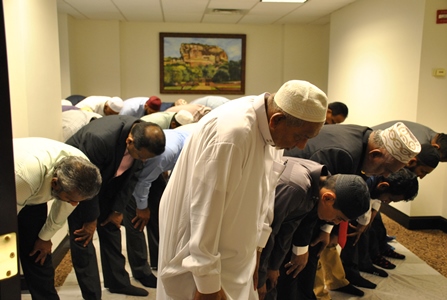 Moulavi Sheik Arkam Nooramith delivered an Islamic sermon in English and Sinhala while Al Haj Thahir Moulavi recited Qirat and made an Islamic sermon in Tamil.  A young member of the Sri Lankan Muslim community, Master Aadhil Fiyaz announced Adhan, and Moulavi Sheik Arkam Nooramith led Maghreb prayers.  Mr. Dilshad Ahmad on behalf of the Sri Lankan Muslim expatriate community thanked the Mission for arranging the Ifthar programme while noting that this year an unprecedented number of members of the Sri Lankan Muslim expatriate community from all parts of the Tri-State area have attended the Ifthar programme at the Mission.