Hon. Sagala Ratnayaka, Minister of Law and Order and Southern Development addresses the Special Session of the United Nations General Assembly on the 'World Drug Problem'

Hon. Sagala Ratnayaka, Minister of Law and Order and Southern Development today (20th) addressed the UN General Assembly and highlighted the need for all international actors to come together to combat the world drug problem. He also briefed the Assembly on the steps that Sri Lanka has taken in its national capacity to address this issue.

Hon. Sagala Ratnayaka is leading the Sri Lanka delegation at the UN General Assembly Special Session (UNGASS) on ‘World Drug Problem’, which is in Session from 19 to 21 April 2016 at UN Headquarters in New York. This Special Session will be an important milestone in achieving the goals set in the policy document of 2009 "Political Declaration and Plan of Action on International Cooperation towards an Integrated and Balanced Strategy to Counter the World Drug Problem", which defined action to be taken by Member States as well as goals to be achieved by 2019. 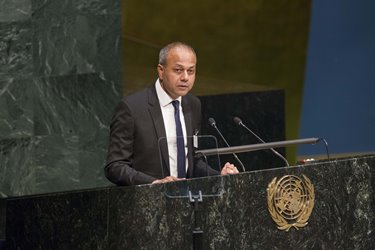 Prof. Ravindra Fernando, Chairman of the National Dangerous Drugs Control Board of Sri Lanka Co-Chaired the Round Table discussion of the UNGASS on Demand reduction and related measures, including prevention and treatment.

Dr. Rohan Perera, Permanent Representative of the Permanent Mission of Sri Lanka to the United Nations and Prof. Ravindra Fernando, Chairman of the National Dangerous Drugs Control Board of Sri Lanka participated at the UN General Assembly Special Session (UNGASS) on ‘World Drug Problem’ and also accompanied Hon. Minister at the bailareral meetings.

The statement made by Hon. Minister at the General Assembly is attached.

At the outset, I would like to thank you for convening this Special Session dedicated to one of the most relevant contemporary issues, the ‘world drug problem’.

My warmest greetings to you Mr. President and the Bureau as well as to all delegates gathered here with the courageous commitment to fight the drug menace to eradicate it from our society.

The Government of the Democratic Socialist Republic of Sri Lanka is conscious of the illicit production, trafficking and abuse of drugs in the country; adverse effects of drug use on health of drug dependents; the upsurge in drug related crime; the draining of human, natural and financial resources and the destruction of individuals, families and communities due to drug use.

The Government reaffirms its political will and determination to tackle the drug problem locally and assist in this cause internationally by reviewing the existing National Policy, which was formulated more than a decade ago.

All institutions that come under government purview will be required to adhere to this national policy. The concerned non-governmental agencies are expected to be active partners in the implementation of the government policy. Fulfillment of the social responsibilities of private sector institutions within the framework of this policy is also critical in drug prevention and control.

The overall goal of the government in relation to the drug problem is an ambitious one, to reduce the drug supply and drug use to minimum levels by 2020.This goal will be pursued relentlessly by all drug law enforcement agencies, the government agencies directly involved in drug demand reduction, including provincial and local administrations and other agencies, which have a potential for contributing to the end objective and NGOs and private sector agencies.

The government will adopt a broader approach to drug abuse control within the context of human development, focusing particularly on the links between drug abuse, poverty reduction, crime prevention and improving health.

The Government believes that the most effective approach to the drug problem would comprise of comprehensive, balanced and coordinate strategy. In such a strategy supply control and demand reduction will reinforce each other. A high sense of shared responsibility will be the norm.

Government institutions, NGOs, private sector and other agencies will be involved in implementing drug control strategies which comprise:

The Precursor Control Authority of Sri Lanka controls 23 identified precursor chemicals, which make an immense contribution to the economic development. It prevents illegitimate production of psychotropic substances from these chemicals. Precursor Control Authority monitors the import, transport, distribution, storage and use of precursor chemicals and supervise  the premises where such activities are performed.

In addition, our concern has extended to reducing abuse of prescribed drugs or over the counter medication. This has been identified as an emerging issue.

Sri Lanka government’s determination in law enforcement is highlighted recently by the detection of 110 kilograms of heroin trafficked by sea where nationals from several countries were involved.

The GoSL has taken initial steps to establish “A Center for Sharing Intelligence on Drug Trafficking” to empower national institutions for accurate information dissemination in South Asian and South East Asian regions.

Further, the GoSL provides treatment and rehabilitation services to those who abuse drugs using accepted screening and assessment methodologies implemented by the government, non-governmental and private institutions in the country. We have adopted the requisite legislation on treatment of drug offenders which, inter-alia, empowers our judicial authorities to prescribe treatment to offenders in State or recognized private institutions, in lieu of punishment.

GoSL works towards its determination of reducing and total elimination of substances with the effective analysis of social and scientific researches on narcotics and psychotropic substances, based on evidence based practices. Outreach services, aftercare and rehabilitation services necessarily effective for all treatment interventions are provided throughout the country, especially focusing on clients, who are away from residential treatment programmes.

Sri Lanka highlights the need of using medical and psychological treatment, ensuring the welfare of specially identified social groups such as children, women and youth who are affected by the negative consequences of substance abuse.

In conclusion Mr. President, I wish to assure you that Sri Lanka stands committed to extend our fullest cooperation to all international efforts to combat the world drug problem, a problem which has no boarders, which threatens to destabilize all our societies.