The High Level Political Forum (HLPF) on Sustainable Development, convened under the auspices of the Economic and Social Council, was held from 10th-19th July 2017 at the UNHQ, New York. This year the HLPF was held in the form of a series of interactive panel discussions under the theme “Eradicating poverty and promoting prosperity in a changing world.” A number of side events were held on the sidelines of the HLPF. Hon. Gamini Jayawickrama Perera, Minister of Sustainable Development and Wildlife, led the delegation of Sri Lanka at the HLPF which included Mr. Uchita De Zoysa, sustainable development advisor to the Ministry, Dr. Samantha Kumara Kithalawaarachchi, Director, Presidential Task Force on Drug Prevention, and officials from the Permanent Mission of Sri Lanka. Hon. Susil Premajayantha, Minister of Science, Technology and Research also visited New York to moderate a session of the HLPF. Dr. A.J. Satharasinghe, Director General, Department of Census and Statistics also attended a session. 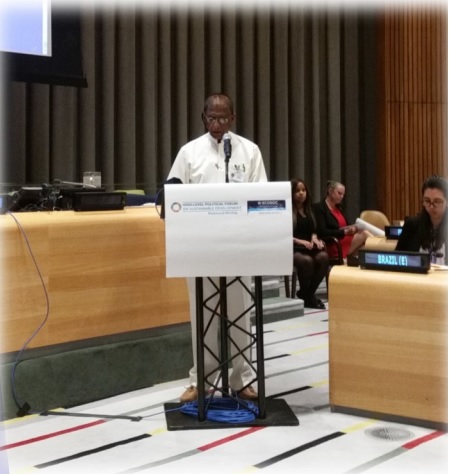 At the general debate, Hon. Gamini Jayawickrama Perera made two statements, one on 17th July 2017 in Sri Lankas capacity as the chair of the Group of 15, and the other on 18th July 2017 in his national capacity. The national statement highlighted the actions that Sri Lanka has taken so far to implement the Sustainable Development Foals at national level. Preparation of the National SDG Action Plan and the plans to launch the National SDG Roadmap by the end of the year were highlighted.

Hon. Susil Premajayantha, Minister of Science, Technology, and Research, at the invitation of the UN, moderation Session 14 of the HLPF entitled Advancing science, technology and innovation for the SDGs on 13th July 2017. This Session extensively explored the policy options and actions for advancing science, technology and innovation for achieving the Sustainable Development Goals.