H.E. Mrs. Kshenuka Senewiratne delivers statement at the High-Level Forum on the Culture of Peace

“The Culture of Peace: Empowering and Transforming Humanity” 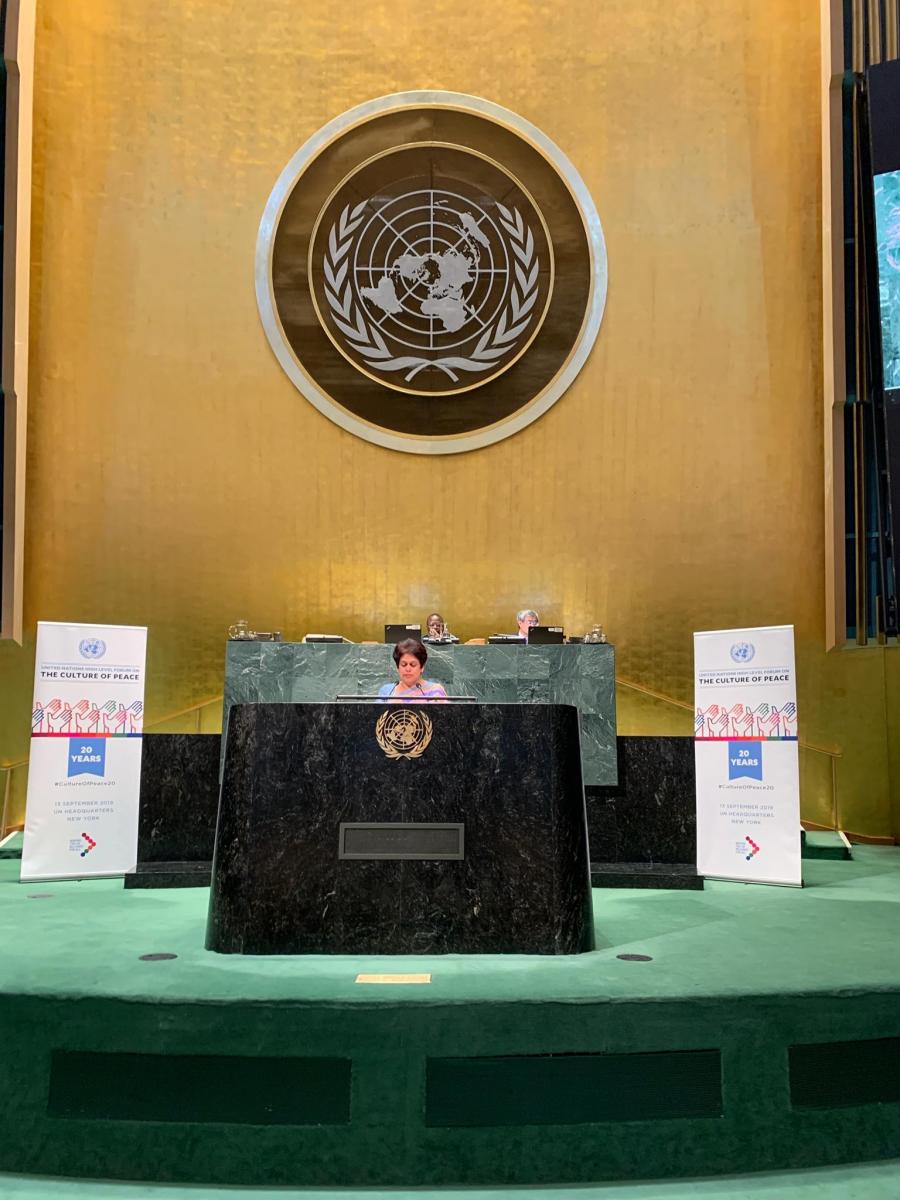 Sri Lanka congratulates you for convening this High Level Forum, as we mark two decades of work based on Resolution 53/243 on the Declaration and Programme of Action on the Culture of Peace.

We wish to thank Nobel Laureate Madam Leymah Gbowee for her solidarity message and extend appreciation to His Royal Majesty Otumfuo Osei Tutu II for his inspirational Keynote Address.

A year before the Millennium Declaration and sixteen years before the adoption of the Sustainable Development Goals, this visionary document transcended boundaries, cultures, societies and nations. It had a programme of action that encouraged action at the individual, family, community, national, regional and global levels; with multiple stakeholders in its implementation. Two decades on, this norm-setting document remains ever vital and important.

The connection between development and peace cannot be overemphasized. Economic development indicators demonstrate that economic growth, trade and investment, are significantly impacted by peace. It was for these reasons that Sri Lanka, having suffered nearly thirty years under the yoke of terrorism, in 2015 launched a reconciliation mechanism based on the four pillars of Truth, justice, reparations and non-recurrence. It has been our experience that peacebuilding and development strategies must work in tandem. Multiple efforts must be made to address the complex challenges of violent conflict.

Neither Madam President must we accept a negative peace, which is merely the absence of war. Rather, we must implement the SDGs in order to address and reform unjust systems that marginalize certain groups, or social norms that appear to justify direct or systemic violence. It is often the case that structural and cultural violence leads to physical violence and armed conflict.

As we move towards the last decade of implementation of the SDGs, our efforts to work collectively at a time of numerous challenges must be redoubled. To this end Sri Lanka wishes to outline some areas which need to be focused on in the pursuit of sustained peace.

For instance, we must continue to seek ways to promote and strengthen multilateralism and diplomacy in order to advance the three pillars of the United Nations which are interlinked, and the common goal of a lasting and sustained peace through diplomacy. It is vital that member states forge new and innovative partnerships in order to promote collective values and ideals.

With regard to the Sustainable Development Goals and 169 targets, they can serve as the perfect tool kit for the promotion of a culture of peace. The integrated nature of the SDGs reiterates the importance of the role of peace as the foundation for equitable development.

The empowerment of women and girls and their inclusion in all areas of peace and security, including in peacebuilding, peace keeping and peace negotiations, are vital in order to build societies founded on peaceful values.

The primary responsibility of implementation lies with the State, and national ownership is important. It is incumbent upon governments to infuse societies with compassion, tolerance and respect for cultural and religious pluralism and create awareness through education.

There must be efforts made through school curricula to help change the mindsets and attitudes of children during their formative years, through value based education, activity, play and sport.

We have to be mindful of both promises and perils of new technology. The media has a key role to play, particularly with the rise in social media to help disseminate the values that seek to foster a culture of peace and create a platform for dialogue and understanding rather than a receptacle for hate and bigotry.