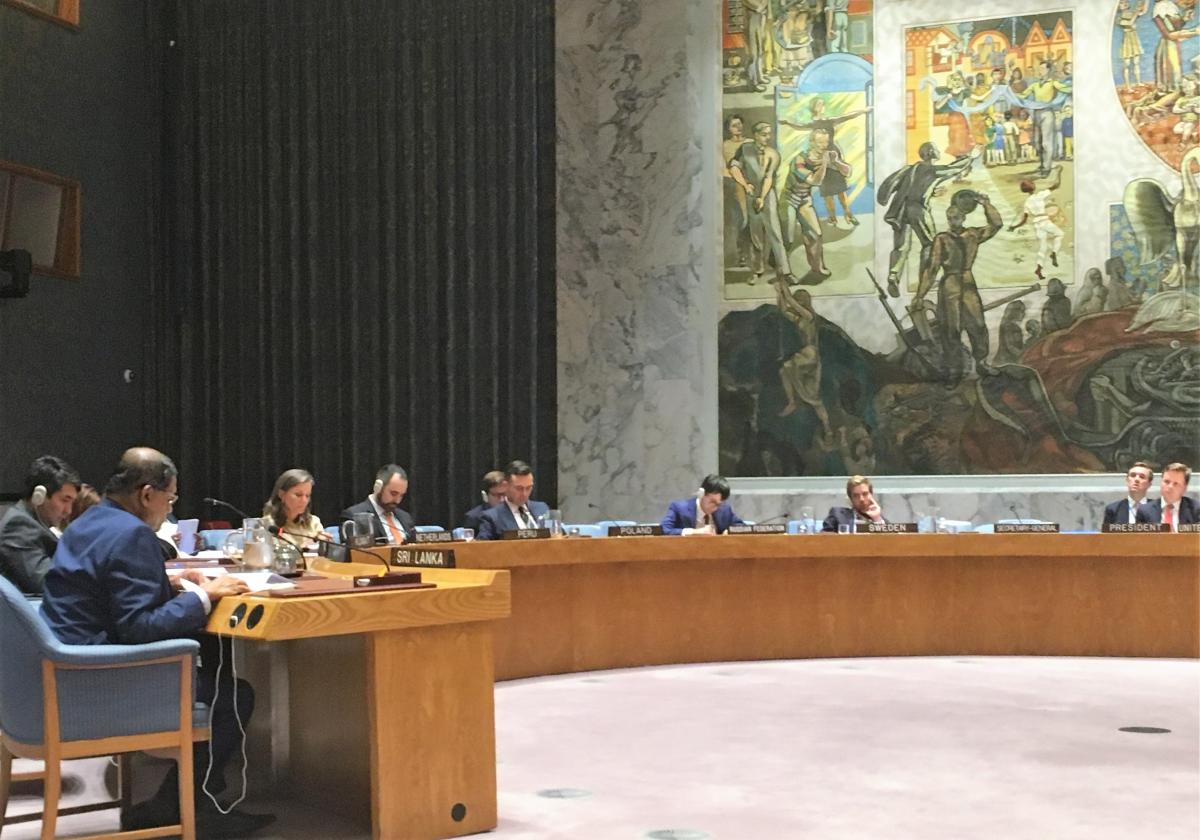 Mediation and the Peaceful Resolution of Conflicts

Firstly, we would like to congratulate the Permanent Representative of the United Kingdom, Her Excellency Karen Pierce for convening this open debate on a most vital subject related to the maintenance of international peace and security. It is a topic that has not been openly debated in the Security Council since 2009, notwithstanding the contemporary nature and the growing complexity of conflicts around the world.

Sri Lanka welcomes the participation of H.E. Lord Ahmed, Minister of State for Foreign and Commonwealth Affairs of the United Kingdom in this debate. We thank the Most Reverend Justin Welby - the Archbishop of Canterbury and a member of the Secretary General’s High Level Advisory Board, the Secretary General Mr. António Guterres and also civil society representatives for their valuable briefings.

We also join all other delegations in saluting the legacy of the late Kofi Annan former UN Secretary General for his notable contribution to the cause of peace and development and the humanitarian agenda - which will remain his true legacy to this organization.

Mediation has been established over time as one of the more effective methods of preventing, managing and resolving conflicts. It is apt to recall that Article 33 of the UN Charter states that any dispute that is likely to endanger the maintenance of international peace and security should first be addressed through negotiation, mediation or other peaceful means, and additionally, encourages the Council to call on the parties to use such means to settle the dispute.

However, the pacific settlement of disputes cannot be forced. Parties to a conflict need to be persuaded by the merits of mediation and well supported peace processes. Indeed, mediation, if it is to lead to a lasting peace, must take place within normative and legal frameworks constituted by the rules of international law, humanitarian law and within the framework of the Charter of the United Nations and relevant Security Council and General Assembly resolutions.

In this regard, the respective role and authority of the General Assembly and the Security Council on promoting and implementing recommendations and procedures for the peaceful settlement of disputes, is set out in Articles 33-38 of Chapter VI and Articles 11 and 99 of the Charter of the United Nations.

The recurring General Assembly Resolution entitled “Strengthening the role of mediation in the peaceful settlement of disputes, conflict prevention and resolution” recognizes the increased use of mediation and reflects on the current challenges facing the international community in such mediation efforts, while calling on key actors to develop their mediation capacities. In this context we particularly welcome the initiative taken by the Secretary General to establish the High Level Advisory board on Mediation.

When we focus on the resolution of disputes by peaceful means and in conformity with the principles of international law and respect for human rights, it is important to reiterate that all United Nations organs must uphold their commitment to the sovereign equality of states and respect their territorial integrity and political independence. It is the duty of all Member States to refrain in their international relations from the threat or use of force in a manner inconsistent with the purposes and principles of the United Nations.

As a country that, in the course of a thirty year conflict, welcomed and engaged in reconciliation and mediation efforts between 2001 and 2006 by an external actor who was invited by both parties to the conflict, Sri Lanka is well aware of both the advantages and pitfalls of such efforts however sincere, if not carefully calibrated, monitored and managed.

In this regard coherence, coordination and complementarity of mediation efforts backed up by reconciliation and peacebuilding is both essential and challenging. Mediation actors at various levels – the international community, including the United Nations, regional, sub regional organizations, international entities, civil society, national and local actors, must all be on board with such efforts.

The implementation of peace agreements may often be dependent at the beginning on a degree of substantial external support, including donors. It will help incentivize the people to support political efforts, as they experience the dividends of peace, in terms of development and real economic benefits. While disputes and conflicts are unique and require specific approaches, good practices should inform all mediation efforts.  We have to continue to adapt our approaches and capacities to meet the changing nature of conflict, particularly in the context of intra-State conflicts as a threat to international and regional peace and security.

There are well established best practices for mediation, most importantly:-

Finally, it is important to acknowledge at this time the United Nations field Missions who work closely with national stakeholders and local communities in accordance with Mission mandates. Their importance in the overall United Nations peace and security architecture, especially at a time the UN and multilateralism in general  faces multiple threats and challenges that test its collective ability to respond, cannot be overstated.

As protracted conflict, violent political upheavals, terrorism, transnational organized crime and arms proliferation threaten the peace and stability in many countries, Special political missions are at the forefront of the United Nations response to those challenges. Therefore, it is important that field missions enhance cooperation with host Governments in order to cement National Ownership.