H.E. Dr. Rohan Perera invited as a panelist to the at the launch of the 6th WHO report on the global tobacco epidemic

World Health Organization’s 6th Report on the Global Tobacco Epidemic was launched today (19/7) at a solemn event held at the One UN Millennium Hotel in New York. H.E. Dr. Rohan Perera, Ambassador and Permanent Representative of Sri Lanka to the United Nations had been invited to participate as a panelist at the high-level panel discussion that followed the launching of the report.

Sri Lanka was invited to this high-level panel discussion in view of the substantive amount of work it has done to fight the tobacco menace at national level.

At the high-level panel discussion Ambassador Perera was invited to share some of Sri Lanka’s experiences with the tobacco industry and comment on Sri Lanka’s commitment to tobacco control. 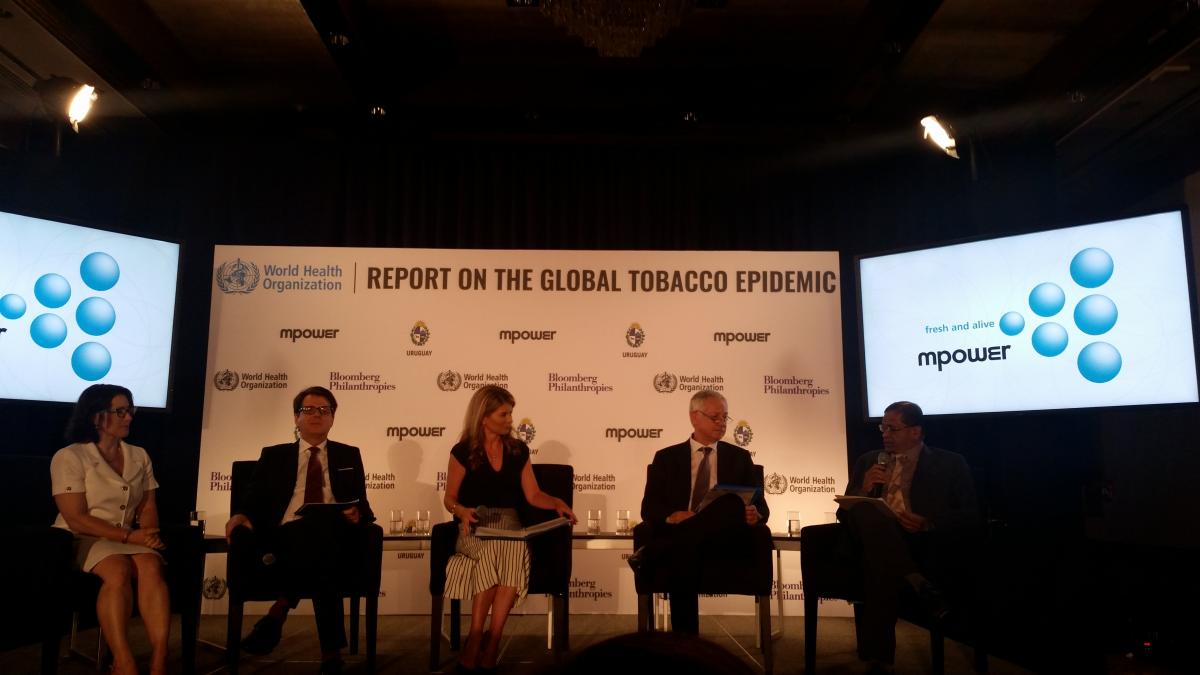 In response, Ambassador Perera elaborated on the action taken by the Government of Sri Lanka with the personal supervision and intervention of His Excellency the President to counter the threat posed by tobacco.

He stated that the Government of Sri Lanka took a number of very important policy decisions regarding tobacco control in the past decade.  He added that the enactment of the National Authority on Tobacco and Alcohol (NATA) Act, which was passed by Parliament unanimously in 2006, and the ratification of the World Health Organization’s Framework Convention on Tobacco Control (WHO - FCTC) in 2003, had been significant landmarks in Sri Lanka’s quest for controlling tobacco.

Ambassador Perera added that these measures were further strengthened by one of the most significant and far-reaching steps taken by H.E.  President Maithripala Sirisena to enact the National Authority on Tobacco and Alcohol (Amendment) Act in March 2015 stipulating 80% pictorial warning to be placed on cigarette packets.

Ambassador Perera also quoted a recent interview by His Excellency the President in which he had explained the nature of hurdles that he experienced in bringing in this legislation.

In his intervention, Ambassador Perera further explained that  the Ministry of Health had issued a circular prohibiting manufacturing, import, or sell smokeless tobacco products, e-cigarettes containing tobacco, and cigarettes that are flavored, colored, or sweetened.

He added that a Presidential Task Force has been established to monitor the situation with regard to drugs and narcotics, which holds monthly review meetings under His Excellency the President’s direction where all relevant sectors meet to assess the progress and make multi-sectoral policies and plans.

He reiterated Sri Lanka’s commitment to tobacco control, and expressed that Sri Lanka’s efforts in controlling the tobacco epidemic was strengthened by the political guidance and leadership from His Excellency the President and Hon. Minister of Health.

He also announced Sri Lanka’s decision as reported in the press today, to ban using tobacco and arecanut in betel quids apart from smokeless tobacco products and mixtures that contain tobacco, which was received by the audience with applause.

The panelists agreed that the Global Conference on NCDs, to be held in Uruguay in October 2017, will bring much needed attention to the need to scale up action on NCDs worldwide. The key message of the discussion was that progress so far has been impressive, but more can be done – and must be done – if the world wants to curb this deadly epidemic.

In his intervention, Dr. Douglas Bettcher, Director, Prevention of Non-communicable Diseases, WHO thanked the Presidents of Sri Lanka and Uruguay for their prominent role in controlling tobacco at national level. He said that since 2008, WHO has been promoting six proven measures to reduce tobacco use worldwide. Known as MPOWER, these cost-effective measures support scale up of specific demand reduction provisions of the WHO FCTC on the ground.

Substantial progress in low and middle income countries in controlling tobacco, in particular the progress in implementing pictorial warnings on packaging, importance of monitoring tobacco consumption patterns, declining smoking prevalence at global level, and the lack of progress in taxation on tobacco products as a means of controlling it are some of the key highlights of this year’s WHO Report on the Global Tobacco Epidemic, which was launched today.

Dr. Tedros Adhanom Ghebreyesus, Director General of WHO said that tobacco is the main cause for NCDs and saw prevention as a major challenge. He observed that WHO best practices on tobacco control protect 60% of the global population from the adverse effects of tobacco. Mr. Michael R. Bloomberg, Founder of Bloomberg Philanthropies and WHO goodwill Ambassador for Non-Communicable Diseases said that though taxation is the most effective tool for tobacco control it is the least spread method globally, and that only 10% of global efforts on tobacco control is covered by taxation.