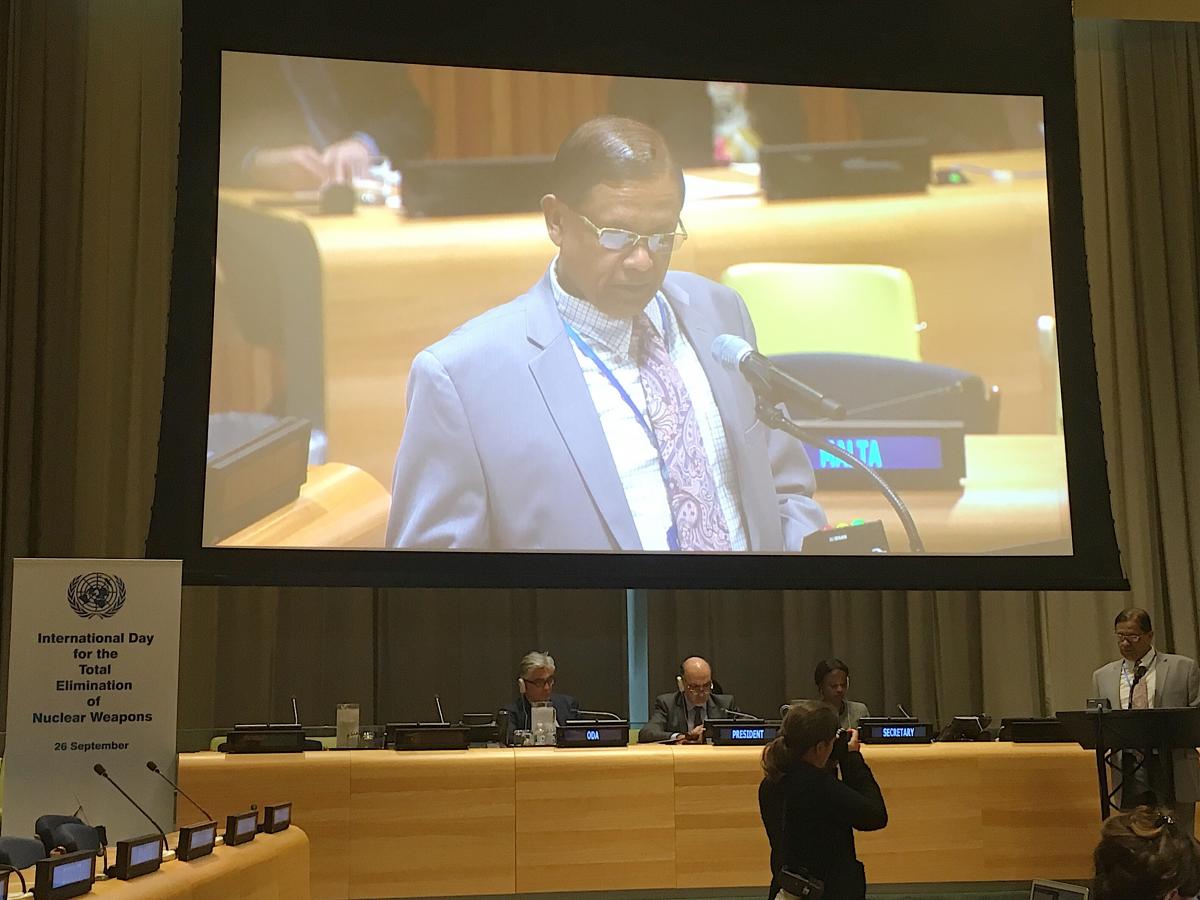 Statement by Dr. Rohan Perera, Permanent Representative of Sri Lanka to the United Nations at the High Level Plenary Meeting of the General Assembly to commemorate and promote the International Day for the Total Elimination of Nuclear Weapons, 26th September 2017

At the outset, let me thank you for convening this high level plenary meeting of the General Assembly to commemorate and promote the International Day for the Total Elimination of Nuclear Weapons.  This event comes at a very opportune moment in time, as was assured by the Secretary General in his introductory remarks this morning.

The Asia Pacific region, specifically the Korean peninsula has seen a dangerous escalation in nuclear weapons testing in the recent months, which threatens the peace and stability of the region and beyond.

As the Bulletin of the Atomic Scientists declared in 2007:

“We stand at the brink of a second nuclear age. Not since the first atomic bombs were dropped on Hiroshima and Nagasaki has the world faced such perilous choices.”

The world is only too aware of the catastrophic consequences that would follow the detonation of a nuclear weapon and the threat that it would pose not only to mankind but to the entire planet.

The risk of these consequences will remain as long as nuclear weapons exist.  It is especially grave given the risk of accidental, mistaken or unauthorized use.  Such weapons are also a threat given the vulnerability of command and control, technical failures, human errors and cyber-attacks.  The danger of these weapons falling into terrorist hands could lead to unthinkable consequences.

Nuclear weapons by nature are inhumane and indiscriminate and their testing and use can cause catastrophic consequences on populations and the environment, both globally and beyond national borders. Their use violates the cardinal principles of international humanitarian law. Nuclear weapons testing and use have disproportionately affected innocent women and children in many parts of the world and has contaminated water and food sources, thereby having a serious impact on human health and the environment. Any use of nuclear weapons would be abhorrent to the principles of humanity and the dictates of public conscience.

Sri Lanka is of the view that the total elimination of nuclear weapons, would

be the only absolute guarantee against the grave danger such tests and weapons pose to humanity.

We firmly believe that the international treaty framework, remains the most effective and legally binding means to address the issue of nuclear disarmament and non-proliferation.  Article VI of the Treaty on the Non-Proliferation of Nuclear Weapons (NPT) casts an unequivocal obligation towards advancing general and complete disarmament.

It is apt to recall that the International Court of Justice, in its Advisory Opinion on the Legality of the Threat or Use of Nuclear Weapons (dated 08.07.1996), clearly states that:

“There exists an obligation to pursue in good faith and bring to a conclusion negotiations leading to nuclear disarmament in all its aspects under strict and effective international control.”

However, we can achieve total elimination only if all countries, both nuclear and non-nuclear, genuinely work together, with strong political will, to achieve this objective.   As has been stated recently by the Global Security Institute, “there is no alternative to international coordinated diplomacy.”

This event today, serves as an important reminder to us all, as to why we must take collective and determined action to ensure the total elimination of nuclear weapons.

Sri Lanka was pleased to vote for the recent adoption of the Treaty on the Prohibition of Nuclear Weapons. We take this opportunity to reiterate our fullest support for the total elimination of nuclear weapons and express our solidary with the international community, in its efforts to achieve a nuclear free world.