H.E. Dr. Rohan Perera, Ambassador & Permanent Representative of Sri Lanka to the United Nations, delivered a speech today (7th September) at the High Level Forum on Culture of Peace, which was held in pursuant of General Assembly resolution 71/252/ of 23 December 2016. H.E. Mr. Peter Thomson, President of the General Assembly, chaired the meeting. Mrs. Betty Williams, nobel laurate, was the keynote speaker of this event. 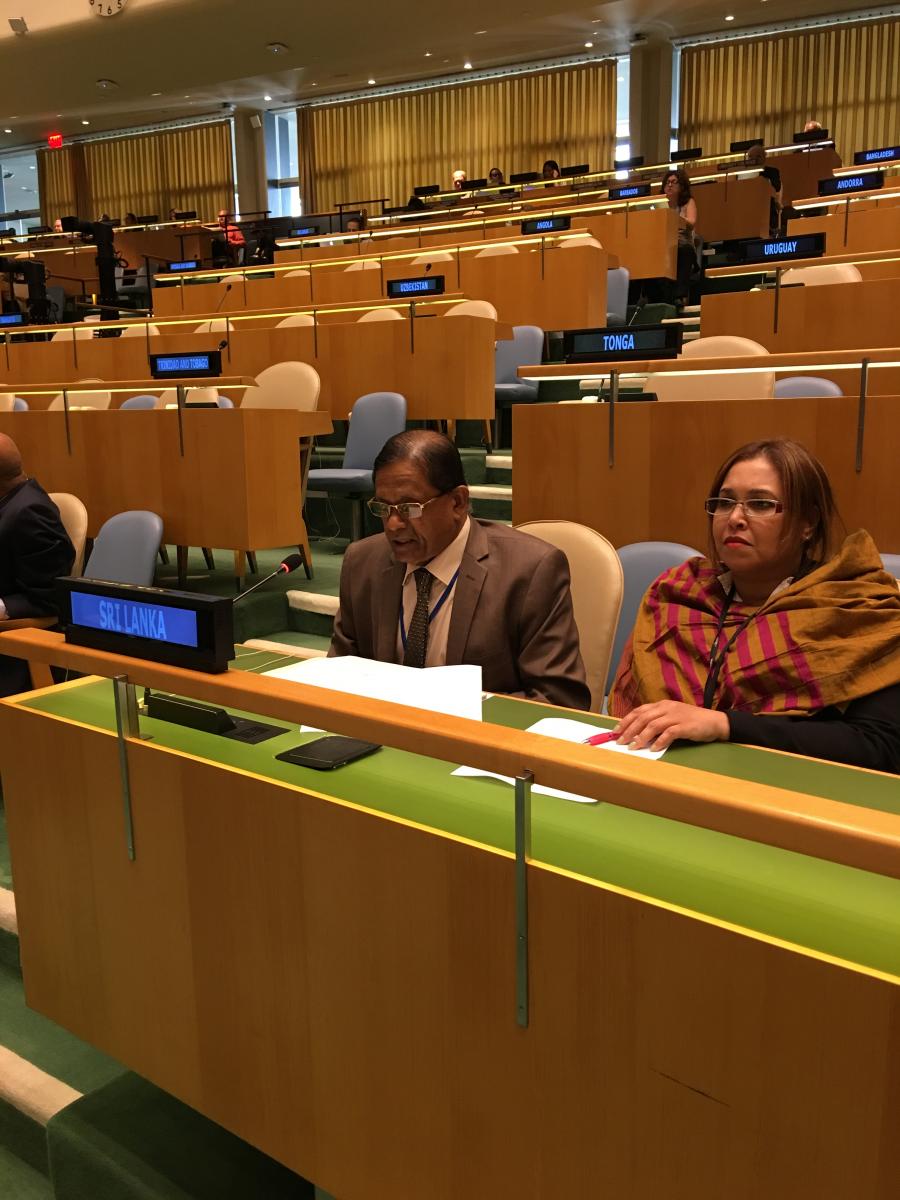 In his remakrs, Dr. Perera noted the issues considered important in fostering a culture of peace, including multilateralism, empowerment of women, education, national ownership, technological advances and the role of youth in the achievemnt of a culture of peace. He also highlighted that the 2030 Agenda "provides the ample tool kit for the promotion of a culture of peace. The interlinkages and integrated nature of the Sustainable Development Goals, especially between peace and development in Goal 4 and Goal 16, reiterates the importance of the role of peace as the foundation for sustainable and equitable development."

His full statement can be found below.

of the Permanent Mission of Sri Lanka to the United Nations

at the High Level Forum on a Culture of Peace

Let me first congratulate you for convening this important Forum not only to promote and discuss emerging trends that impact on the realization of a Culture of Peace but also to focus on the relationship between a Culture of Peace and Childhood Development.

My delegation asserts and re-affirms its commitment for building a culture of peace, and recognizes the need for continuous support to further strengthen this global movement.

At this time Sri Lanka would like to flag certain issues as important in fostering a culture of peace.

Firstly, despite our best efforts, we still face emerging and unprecedented challenges such as violent extremism, refugees, inequality and climate change; the impacts of which, transcends national borders and require collective action to address them. It is vital to recognize that the most efficient way to prevent conflict is to support and sustain a strong functional multilateral system, where engagement, compromise and mutual respect for each other are key components, and where there is a genuine commitment to a common humanity while fully respecting and embracing diversity.

Thirdly, it is also important that Goal 5 on Empowerment of Women is seen as a key component to the promotion of a culture of peace. The empowerment of women and girls – who become the unfortunate victims of conflict - and the inclusion of women in all areas of peace and security, including in peace building, peace keeping and peace negotiations is imperative for the world to move forward in peace.

Fourthly it is important to underline the importance of national ownership. Establishing programs at the national and community level that raises awareness and fosters peace and tolerance; respect for the cultural values of the other; especially in a time when the rhetoric of hate and the politics of the ‘other’ is prevalent, is more vital than ever before.

Fifth, if we are to promote the Culture of Peace we must begin with our youth and in our schools. As the great Mahatma Gandhi said “If we are to teach real peace in this world, and if we are to carry on a real war against war, we shall have to begin with the children."

It is in this area Mr. President, as you have rightly highlighted, by steering this debate towards Childhood Development, that my country is most focused at this time.

Realizing the need for transformative change and the need to begin at a young age, my government will introduce a programme titled “Think Equal” a comprehensive social and emotional learning program for 3-5 year olds in Sri Lanka’s 35,000 preschools from January 2018. This programme seeks to adopt a curriculum mediating all aspects of experiential, social and emotional learning to systematically change the education sector in order to end discriminatory mindsets and a cycle of violence. It seeks to change the mindsets and attitudes of children during their formative years, through value based education as a compulsory new subject.

As a country recovering from conflict,  we remain convinced that the only way to heal the wounds of division is by inculcating the values of empathy, oneness, inclusion, forgiveness, compassion and love in our children while they are young and open to change.

In addition, Sri Lanka has also established the office of National Unity and Reconciliation (ONUR). Among a range of activities, ONUR is working on educational sector reform to incorporate national unity and reconciliation as a pillar within the education sector, with a view to instilling in our children the importance of plurality. ONUR is also providing training to multi-religious leaders and clergy in peacebuilding in order to use them as an early-warning mechanism to defuse potential conflict situations.

Sixth, we have to take into account new and emerging trends including rapid technological advances that would impact or impede the promotion of a culture of peace. It is important that the media especially with the rise in social media tools helps disseminate the values that will foster a culture of peace and a forum for dialogue and understanding rather than a platform for hate and bigotry. In this respect, we must actively seek to prevent the abuse of social media to promote the culture of racism, hate and intolerance.

In conclusion the effort of promoting peace certainly requires stronger joint efforts by the international community and with multi stakeholder support especially at a time when fear and fear mongering, radicalization, terrorism and violent extremism threaten the very survival of our societies.

Sri Lanka remains committed to its continued engagement in this common endeavor.