Former President Mrs. Chandrika Kumaratunga was the main speaker and a panelist at an Interactive Session titled Leading by Example: Innovative Partnerships and Responses on 11 May 2016. The interactive Session was one of three Sessions organized during the High Level Thematic Debate on UN, Peace and Security held at the UN Headquarters in New York. Mrs. Kumaratunga elaborated on Sri Lanka's experiences, its reconciliation mechanisms based on the four pillars of Truth-Seeking, Justice, Reparations and Non-Recurrence, and the work of the Office of National Unity and Reconciliation which she chairs. The former president, said that Sri Lanka was making a concerted effort to change the hearts and minds of the people, including youth, primarily through education. Sri Lanka she said was committed to attacking the root causes of the conflict through transformative mechanisms, and that in this endeavor partnerships with local and grassroots groups, regional groups and also global institutions was necessary. The Panel was chaired by Argentina’s Foreign Relations Minister Susana Malcorra. Yesterday (10 May) Mrs. Kumaratunga delivered the national statement at the High Level Thematic Debate held at the Trusteeship Council. 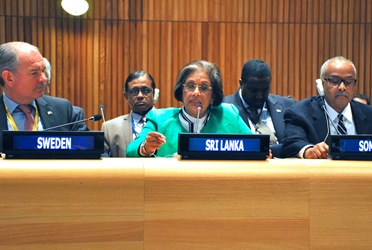