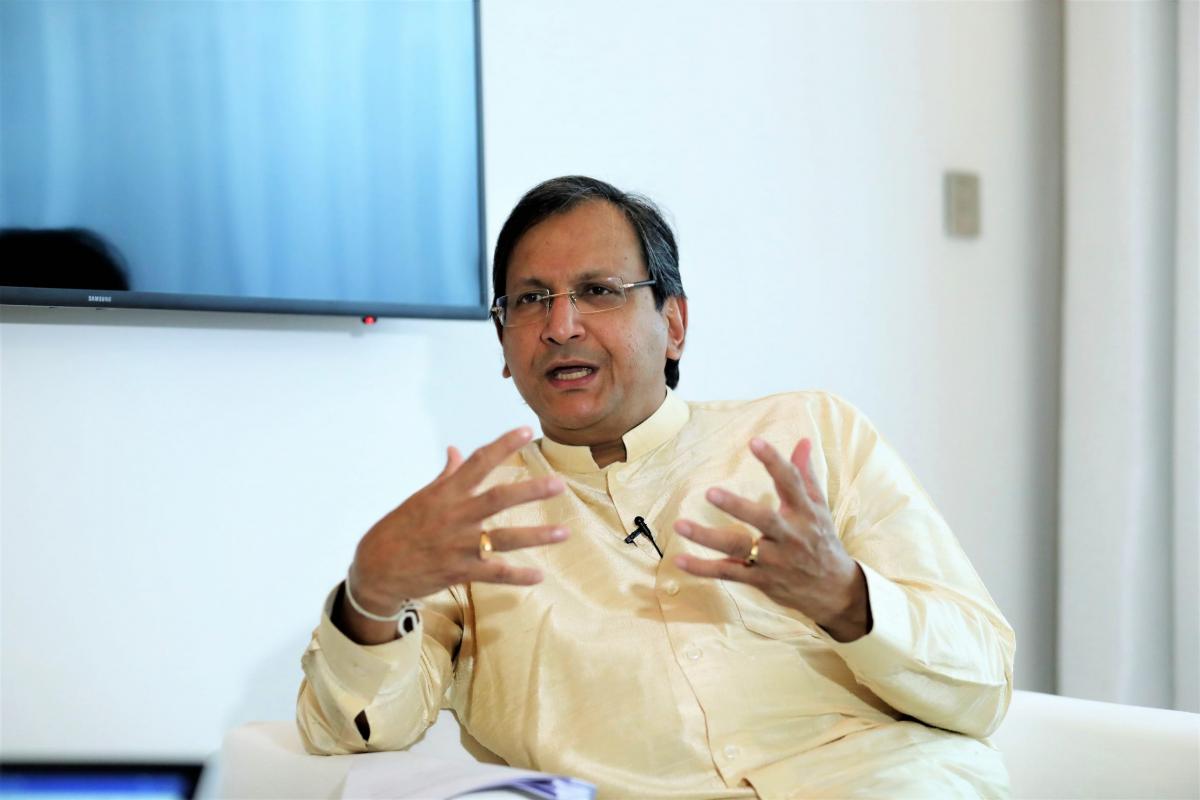 Foreign Secretary Ravinatha Aryasinha participated in a television interview, recorded today (07 May 2020), at the Sri Lanka Rupavahini Corporation (SLRC) where he expanded on the Cabinet Paper presented by Hon. Dinesh Gunawardena, Minister of Foreign Relations, Skills Development, Employment and Labour Relations  regards "addressing the vulnerable sectors of the migrant labour category of Overseas Sri Lankans amidst the COVID-19 pandemic by the Government of Sri Lanka".

The full transcript of the interview is below.

So far, the Government has been going ahead with its programme of repatriation of students of Sri Lanka who are stranded in the countries and the students who wanted to return to Sri Lanka, now the focus of the Government has been diverted towards migrant workers, especially in the Middle East and any other country. A new Cabinet Paper was submitted and approved yesterday. As Foreign Secretary, what can you say about this whole process.

I don’t see this as a diversion. The Foreign Ministry’s view always had been that once return was allowed and repatriation started, it should be done on the basis of maximum vulnerability. It is on that basis that we recommended that South Asian students be prioritized and that first concluded only about a week ago.  Now several other groups of students have also been brought back and will continue to be brought back. The significance of the Cabinet Paper presented yesterday by Foreign Relations and Foreign Employment Minister Dinesh Gunawardena was to re-emphasize something we said in our very original Cabinet Paper over a month ago that the foreign migrant workers are a category which are in dire straits in certain countries and that therefore in parallel with any student movements that we must also pay special attention to them and facilitate their return. In this context, presently I see the Maldives where a lot of Sri Lankans want to come back, particularly about a 1200 - 1500 living in Male Island as the most vulnerable. Then in places like Kuwait, in addition to that vulnerability for COVID which is common to the rest of the Middle East, there is also an amnesty declared by the Kuwaiti government and we are conscious that there is anxiety on the part of foreign employees that if they lose this amnesty they will have greater difficulty coming out and returning as legals someday. The Kuwaiti government at this point has offered to fly them back to Sri Lanka. In fact, this evening Foreign Minister, having received Cabinet sanction yesterday, is going to engage with its Kuwaiti counterpart and will be discussing a process by which Sri Lanka can respect that amnesty offer. We will be starting the process, but the Kuwait government is very conscious that we can’t bring all the people who are wanting to come at this point. Therefore, we will have to, between the two governments, have some negotiations on how we phase that out. Then there is also the problem of Sri Lankan expatriates working in places like Bangladesh, again where COVID is spreading at a very rapid pace and there are more than a thousand people there, out of which about 300 plus are women and children. We will similarly focus on repatriating vulnerable migrant worker categories from the Middle East and elsewhere. The Cabinet Paper’s second aspect was to ensure that local quarantine facilities are reserved for those coming who can’t afford to go to quarantine in Hotels. Third, the Cabinet Paper referred to the continued Diplomatic representation to sustain the large number of migrant workers in their current places of domicile and also to ensure that there is continued supply to the most needy, which is something Missions with the support of the SLBFE has been doing over the past few weeks. I think that is very important at this juncture, because there are issues that come up from time to time, which can be resolved with intervention by the Missions – an extension of visa, a landlord who is demanding rent, a business partner who is demanding back some payment due, somebody who is seeking shelter and fixing a family for them to stay with or someone who hasn’t a meal and wants some dry rations and sometimes medicines. Our Missions across the world, not only in the Middle East are providing valuable assistance to all Sri Lankans abroad. Naturally our capacity is limited financially, but together with Sri Lankan organizations as well as other philanthropic organizations in those countries and churches and other religious bodies we are trying to meet that requirement.

Now what is the message for migrants? As you said there are different needs of them and different situations. So according to their situation what should they think before they request to visit Sri Lanka?

Well that is a question each migrant has to answer for themselves and a migrant meaning a student, someone working abroad. There is also a category of about 3000 people out there who are there on short term visits and stuck, they don’t have that choice, they have to come back home, and we are trying to draw them also in to the present movements, to the extent possible, probably with the hotels being used for quarantine, which are also now getting filled up. But to those who have a choice, my advice has all along been to make an objective assessment of one’s circumstances. Somebody who is, say in a country where universities are functioning and the term not over, might lose out education wise if that person tries to move around. The same way somebody who is in a job whether in the Middle East or any country, blue collar or white collar, at this point when you come back, you might not be able to return to that job because those countries are also cutting back and everybody is scaling down, and so is the case in Sri Lanka. But if you don’t have a job already, then I can see the logic, but I think it is important that people out there understand that when you come back to Sri Lanka too finding jobs won’t be easy.

So our plea through our Mission network in 67 cities to people out there is that they measure these factors very carefully. Those who insist on coming back, we will prioritize in an objective way. Not by looking at faces or connections, but by looking at the real necessity of their repatriation at this point and our capacity to bring them and quarantine them, so that they are not a danger to those in the country and they don’t unnecessarily expose themselves to danger on the way in to the country.