Foreign Secretary Ravinatha Aryasinha who is presently leading the Sri Lanka delegation to the 74th UN General Assembly Session, on Friday (27th September 2019) met with Mr. Jean-Pierre Lacroix, Under Secretary General of the United Nations Department of Peace Operations (USSG/UNDPO) at the UN Headquarters in New York to discuss obstacles placed on Sri Lanka’s Peacekeeping contribution to the UN.

Upon the Foreign Secretary seeking clarification on the statement made on 25th September 2019 by the Deputy Spokesman of the UN Secretary General relating to Sri Lankan troops deployed for UN Peacekeeping, the Under Secretary General (USG) stated that only 25% of the troops from Sri Lanka presently engaged in peacekeeping operations will be replaced, when they complete their term in Lebanon. These places would be filled through a re-adjustment of existing peacekeepers presently in Lebanon. USG Lacroix confirmed that there will be no further reduction of Sri Lanka Peacekeepers. 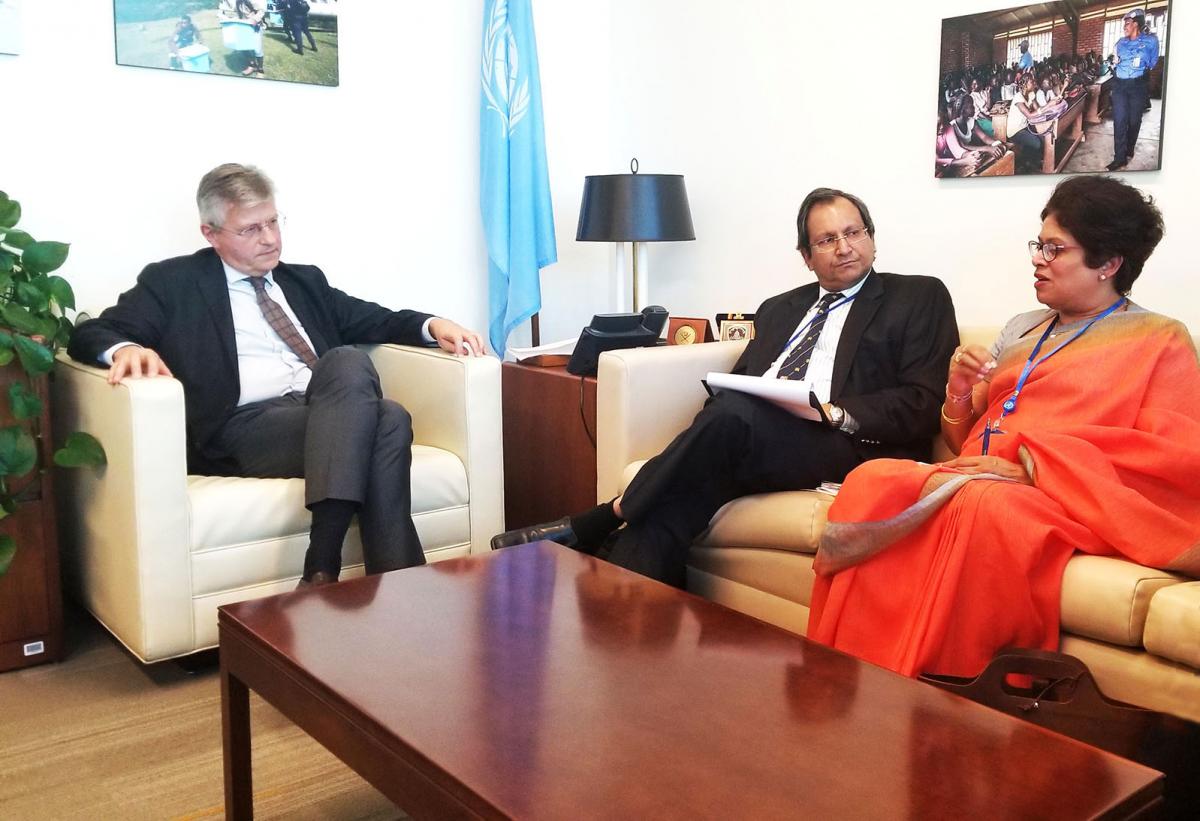 Earlier, the Foreign Secretary pointed out that the President of Sri Lanka had appointed Lt. Gen. Shavendra Silva as the Army Commander in the context that there were no factually substantiated or proven allegations of human rights violations against him, and by virtue of his being Chief of Staff at the time.

The Secretary observed that the Government of Sri Lanka disputes the credibility of the compiled reports relating to allegations against Lt. Gen. Silva. He recalled that the 2011 Darusman Report was so seriously flawed that the Human Rights Council at the time had rejected to issue it with a formal number, as a UN document. Further, it was stated that the OHCHR Inquiry Report (OISL) of September 2015 made clear that “it was a human rights investigation and not a criminal investigation” and that “the names provided in the description of the chain of command do not imply criminal responsibility for those particularly alleged violations listed in this report, either as direct responsibility or under command or superior responsibility. Individual criminal responsibility can only be determined by a Court of Law with all necessary due process guaranteed.” The International Truth and Justice Project (ITJP) publication of January 2019 was a re-formulation of previously published flawed material. He said none of these reports can be taken as substantive as establishing culpability of Lt. Gen. Silva.

The Lessons Learnt and Reconciliation Commission (LLRC) as well as the Paranagama Commission reports, which were domestic processes that examined the allegations particularly with regard to the last stages of the conflict, have not found substantive evidence against the conduct of the current Army Commander, who has testified in person before both Commissions.

The Foreign Secretary noted that in relation to this issue Sri Lanka was of the view that there have also been serious discrepancies in the information released to the public domain by the UN. There was no reference to the delay in the joint National Human Rights Commission of Sri Lanka (NHRCSL) and UN vetting of peace keepers, which had been alluded to when the discussion of limiting Peacekeepers was initially conveyed to the Government of Sri Lanka. It was pointed out that while the MoU with the UNDPO clearly states that modalities for termination shall be agreed to following consultations between the parties, in this instance, the UN did not fulfill its obligation and took an unilateral decision and presented a fait accompli to Sri Lanka.

The decision was conveyed during a courtesy call by the Permanent Representative of Sri Lanka on the UN USG, which was inappropriate. It was further regretted that there had been no communication with the Sri Lankan side by the UNDPO prior to the UNSG’s Deputy Spokesman going to the public domain. Additionally, the information with regard to the troop contributing country whose peacekeepers are expected to replace those of the Sri Lankan troops, was learnt by Sri Lanka’s Ambassador in Lebanon from the counterpart of the country concerned, at a diplomatic reception, rather than being professionally conveyed by the UNDPO.

In the communications on the part of the Government of Sri Lanka with the UNDPO it has been pointed out that the appointment of Lt. Gen. Silva as the Army Commander has no link to the suitability and engagement of the Army personnel being nominated for UN Peacekeeping operations who are thoroughly, jointly vetted, and therefore it is unacceptable to penalize these troops through punitive action on them personally. Furthermore, depriving them of being legitimately deployed in the related operations earmarked following their training and equipping, would also be a denial of their rightful expectation. Thereby, the UN has overlooked the humanitarian aspect by implementing the said decision. In addition, to these identified Sri Lankan Peacekeepers being denied the opportunity of providing their competent expertise due to the said action by the UNDPO, it would also result in inconveniencing the troop receiving country and possible destabilization and compromising of peacekeeping operations in the relevant theatre of service.

Secretary Aryasinha observed that in operationalizing this decision, by seeking non-replacement of Sri Lankan Peacekeepers in one location where it is relatively easier to serve, while expecting them to continue in more vulnerable and high threat locations, the UNDPO was resorting to “cherry picking” on a questionable basis, which bears hallmarks of politicization of a sacred duty.

On behalf of the Government of Sri Lanka, Foreign Secretary Aryasinha requested that the UNDPO reviews its decision in the context of the facts presented by the Government of Sri Lanka, thereby, being respectful of a country that has been a long standing contributor to UN Peacekeeping since 1960, and continues to serve in some of the most difficult theatres of action, having also suffered casualties.

Ambassador Kshenuka Senewiratne, Permanent Representative of Sri Lanka to the United Nations, Brig. Vijendralal Gunathilleka, Military Advisor of the Permanent Mission of Sri Lanka to the UN and other senior officials were associated with the Foreign Secretary. The Under Secretary General was assisted by Lt. Gen. Carlos Humberto Loitey, UN Military Adviser for Peacekeeping Operations, Mr. Peter Due, Representative of the Secretary General and Head of the UN Office in Belgrade (UNOB) and Mr. Marco Bianchini, Chief of the Front Office of the USG.