A Discussion on Increasing Women in Peacekeeping, on the occasion of the UN Security 1325 on Women, Peace, and Security

The Permanent Mission of Sri Lanka to the UN, in partnership with the Permanent Mission of Canada to the UN, the Association of War Affected Women, and the International Civil Society Action Network (ICAN) held a panel discussion under the theme, “Increasing Women in UN Peace Keeping” today (31st October 2017) at the UN headquarters. The event was held on the occasion of the 17th Anniversary on UN Security Council Resolution 1325 on Women, Peace, and Security. 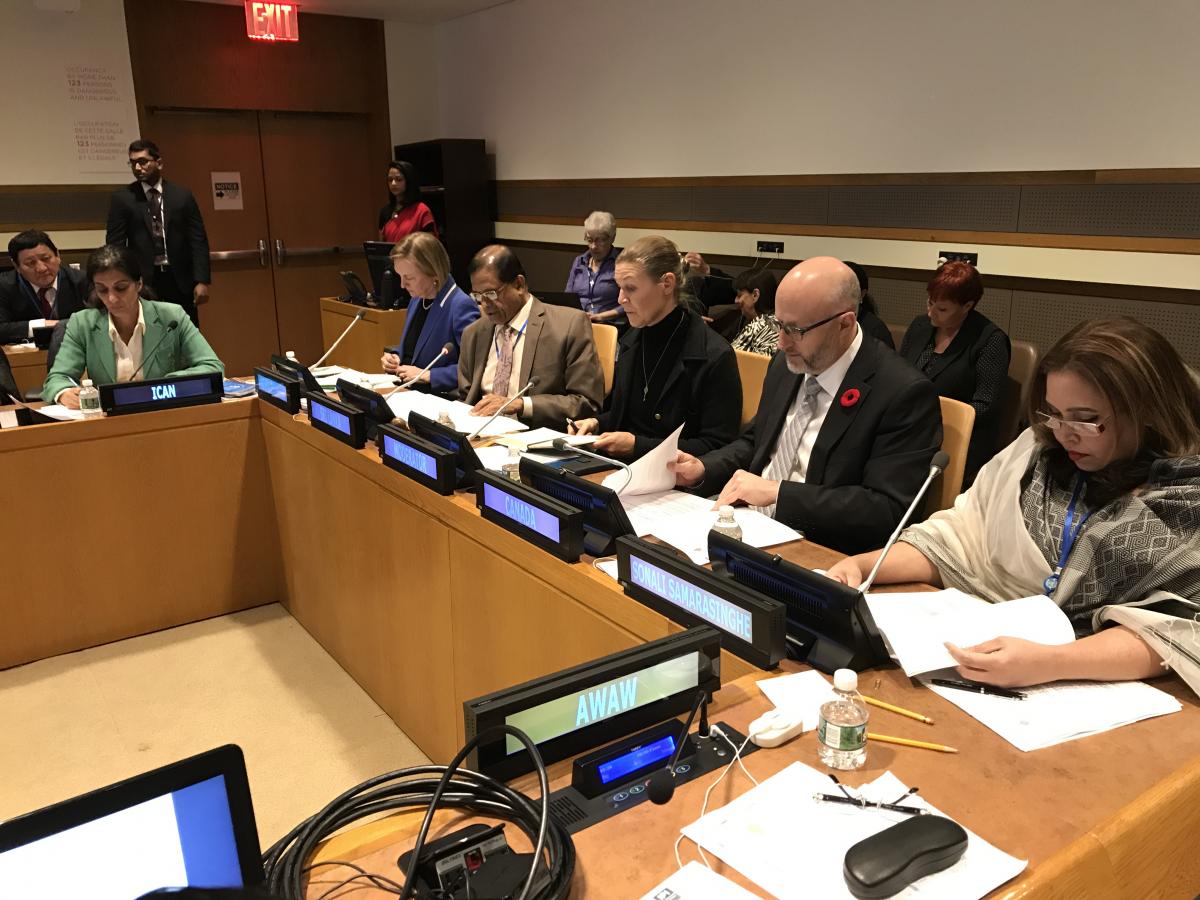 Dr. Rohan Perera, Ambassador and Permanent Representative of Sri Lanka to the UN, welcoming the guests and panelists, noted that the anniversary of UNSCR 1325 was an opportunity to reflect on the progress made and the challenges that remained in the implementation of the landmark resolution. He stressed that two central challenges included increasing women’s inclusion in peacekeeping, and ending the issue of sexual exploitation and abuse (SEA). He noted that Sri Lanka was strongly committed to both issue areas, being one of the first countries to sign the Secretary General’s Voluntary Compact on eliminating Sexual Exploitation and Abuse, having H.E the President of Sri Lanka Maithripala Sirisena join the Secretary General’s Circle of Leadership, as well as contributing to the Trust Fund to help victims of Sexual Exploitation and Abuse.

Speaking on the panel, Ambassador Michael Grant, Deputy Permanent Representative of Canada to the UN emphasized the importance of conducting gender sensitive analyses at all levels of the peacebuilding process, asserting that it was important not only to get more highly capable women into the field more often, but also work to have them involved in mission planning processes.

Panelist Ms Lisa Buttenheim, Assistant Secretary General for Field Support emphasized that the percentage of women deployed in peacekeeping missions remained at a low 5% as of August 2017, calling urgently for the increase of this number.

Ms. Sonali Samarasinghe, Minister at the Permanent Mission of Sri Lanka to the United Nations emphasized the need to combat the cultural, systemic and structural gender biases that prevent the inclusion of women in the peace and security agenda. She stressed that cultural norms and traditional gender roles can sometimes serve as obstacles for women’s prolonged involvement in the armed forces. She further emphasized Sri Lanka’s commitment to the ending of sexual exploitation and abuse in peacekeeping, including through the process of sending highly trained peacekeepers, who have undergone a stringent vetting procedure with the involvement of the Office of the High Commissioner for Human Rights and the independent National Human Rights Commission. 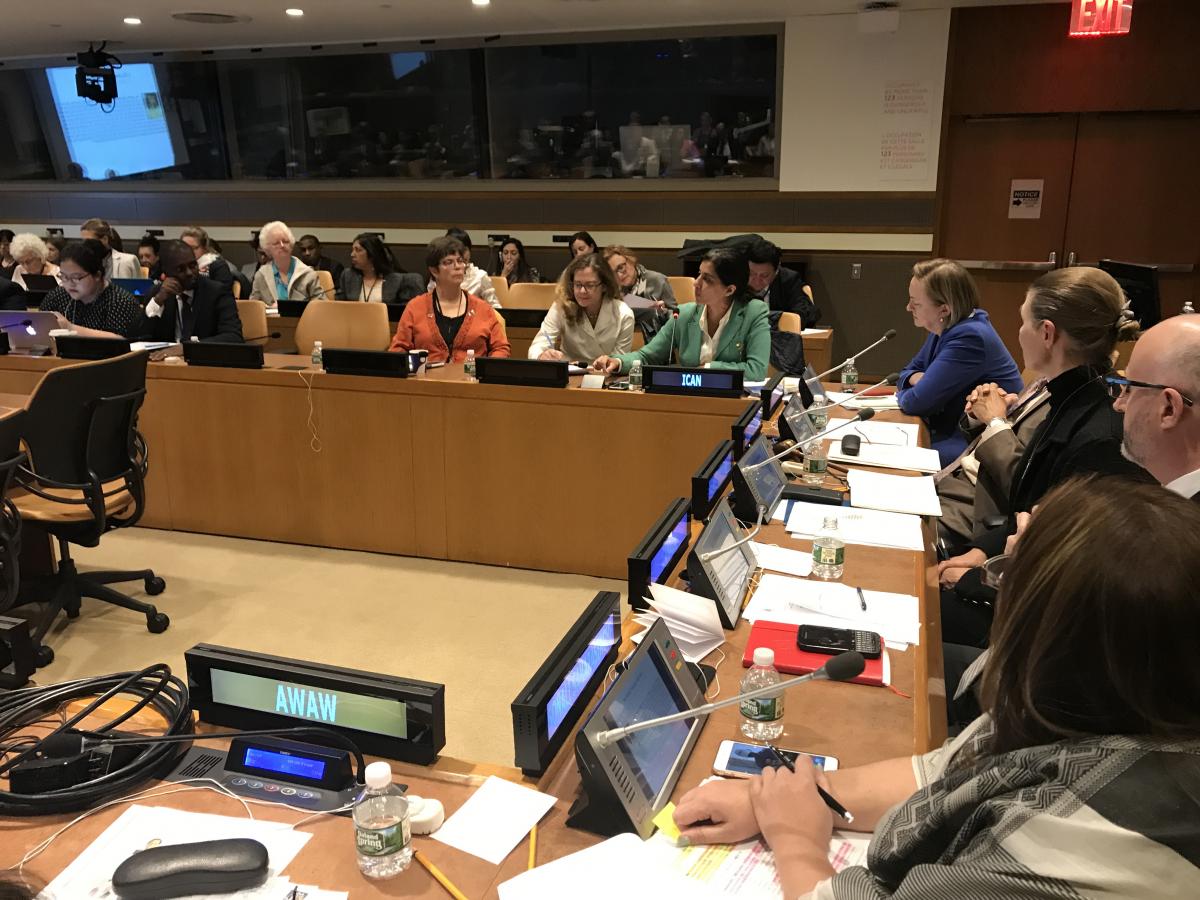 Ms. Sanam Naraghi-Anderlini, Co-Founder and Executive Director of ICAN, contemplating potential strategic ways forward, suggested considering punitive measures for offenders, as well as conducting public awareness campaigns in regions where peacekeepers are sent in order to raise awareness on what treatment citizens on the ground should expect from peacekeepers, avoiding potential opportunities for exploitation. Similarly, noting the different forms of access and engagement that women can have, Ms. Anderlini emphasized that attention must be given to the added value of having women in these processes.

The panelists answered questions from guests at the event, who included representatives and peacekeeping advisers from Permanent Missions, members of non-profits and civil society representatives, and other members of UN bodies.

Ms. Visaka Dharmadasa, Founder and Chair of the Association of War Affected Women provided the closing remarks, commending the Missions of Sri Lanka and Canada and the International Civil Society Action Network (ICAN) in organizing the panel discussion.

Ms. Charlotte Isaksson, Senior Advisor on Gender and Women, Peace and Security in European Union External Action Service served as the moderator of the event.