Day of Vesak celebrated at the UN Headquarters in New York

Proclamations issued by the Governor of New York State Andrew Cuomo and New York City Mayor Bill de Blasio on the Day of Vesak were read out by their representatives at the Dana ceremony. 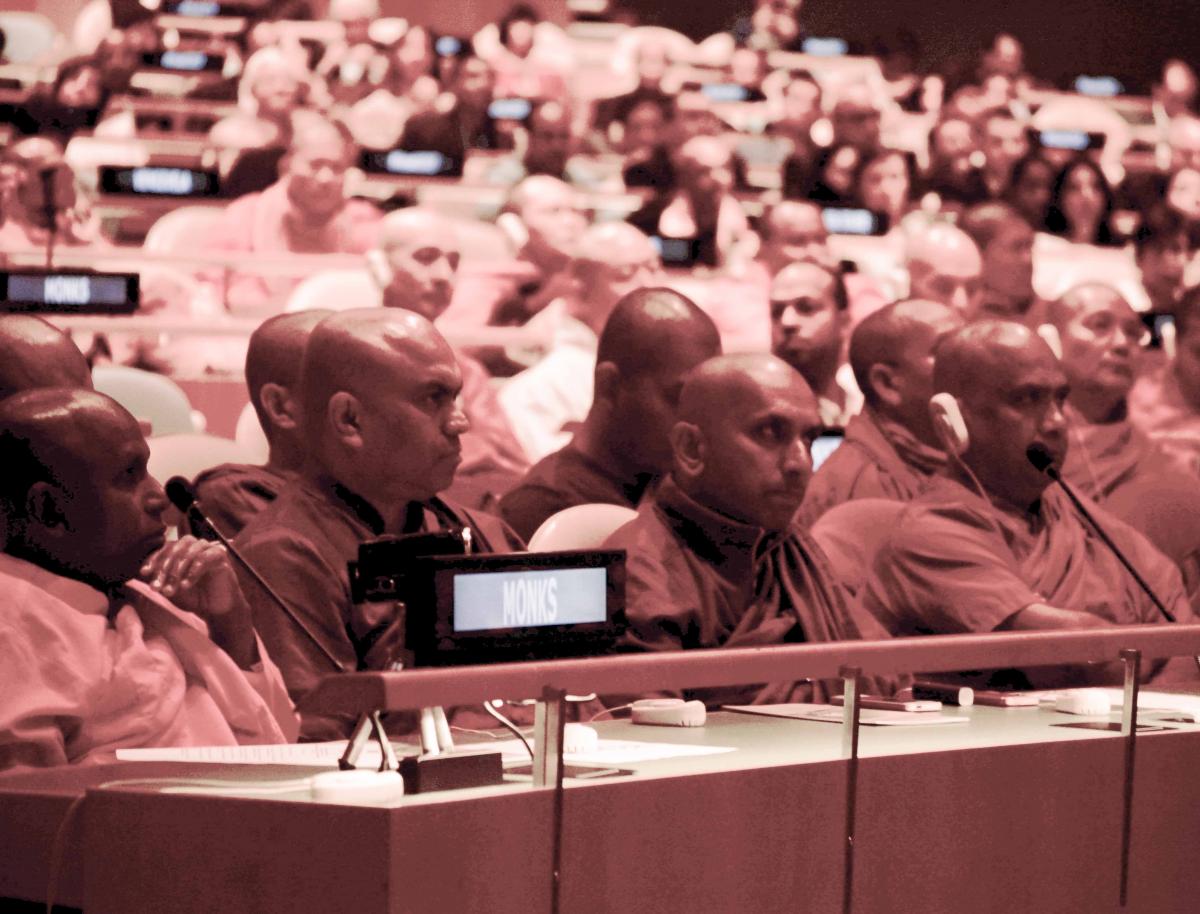 Part of the Maha Sangha who attended the solemn event at the United Nations General Assembly Hall.

The renowned American Buddhist monk Ven. Bhikkhu Bodhi, delivered a scholarly sermon, which was well received by those who were present. 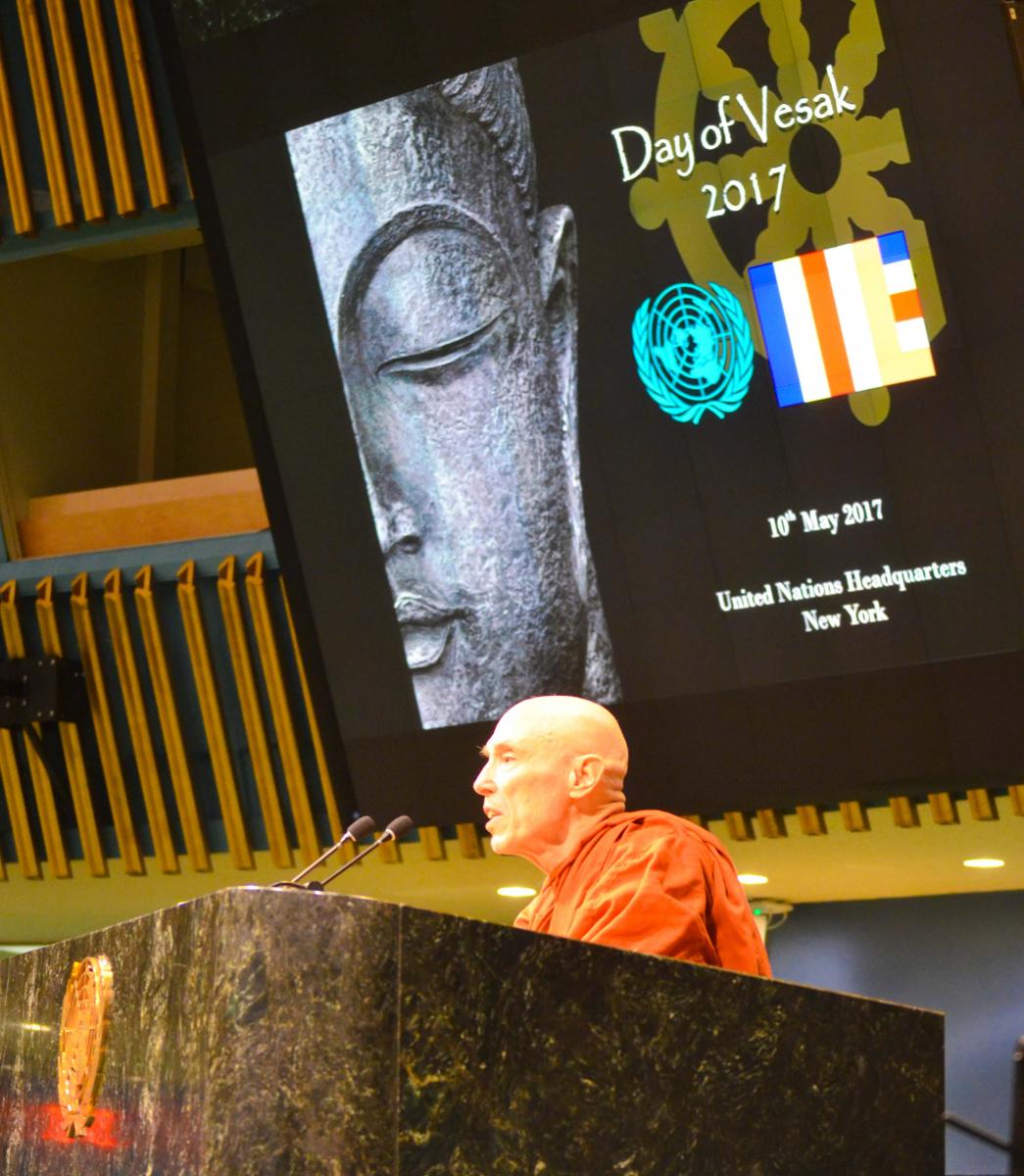 As an interlude, a group of Sri Lankan students from the Tri-State area performed a musical recital of the famous song with a Buddhist theme Danno Budunge. This musical recital was much appreciated by the attendees.

Permanent Representatives of Bangladesh, Cambodia, India, Lao PDR, Malaysia, Mongolia, Myanmar and Viet Nam addressed the General Assembly reflecting on the significance of the Day of Vesak. Bhutan, Indonesia, Japan, Nepal, Pakistan, Philippines, Singapore and the Russian Federation spoke at either Chargé d’Affaires or Deputy Permanent Representative level. Each statement was accompanied by a slide show of photographs depicting how the Day of Vesak is celebrated in their respective countries. 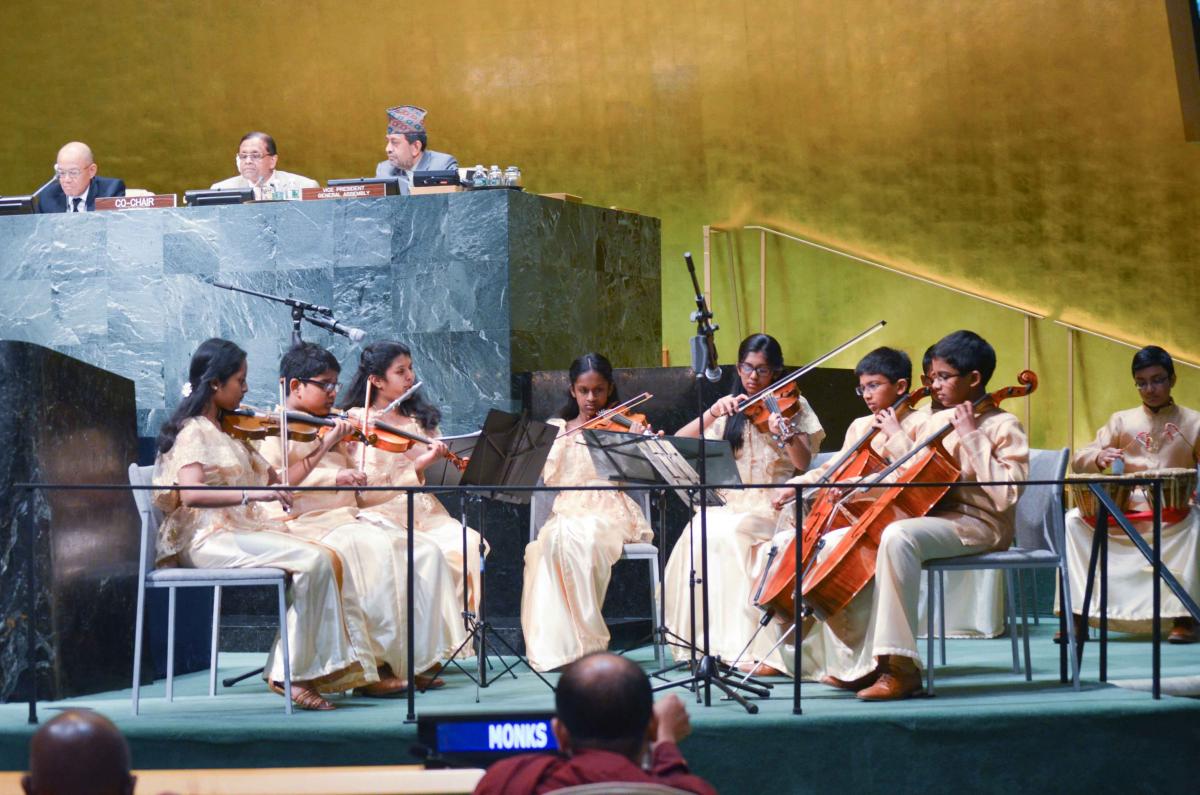 A group of Sri Lankan students from the Tri-State area performing a musical recital of the song Danno Budunge.

Addressing the General Assembly, Sri Lanka’s Permanent Representative to the United Nations and co-chair of the event to mark the Vesak Day at the United Nations Headquarters, Ambassador Rohan Perera observed that that the message of peace and compassion, taught by the Lord Buddha is valid and relevant in the present day world, more than ever as the Buddha’s teachings provide an ideal framework to view and analyse the reality of the world, and to find solutions to problems by looking at that reality with a right view.

Stressing the importance of right view or Samma Ditti, he added that in dealings at the United Nations, and in politics among nations in the present day, right view is a must. Ambassador Perera concluded that if countries are to apply the Buddha’s teachings on the right view to their dealings, root causes of mutual distrust, hatred, and tensions could be eliminated, saving millions of lives and easing human suffering.

The Most Venerable members of the Maha Sangha,

Distinguished Co-Chair, His Excellency Mr. Virachai Plasai, Ambassador and Permanent Representative of the Kingdom of Thailand to the United Nations,

It is indeed a great honour and privilege for me to extend a warm welcome to you all and to address you on this very auspicious occasion marking the thrice blessed Day of Vesak. Today we commemorate the birth, the enlightenment and the Mahaparinirvana of the Lord Buddha.

As we celebrate the Day of Vesak today, I strongly believe that the message of peace and compassion, taught by the Buddha is valid and relevant in the present day world, more than ever. The Dhamma or the doctrine of this great teacher has shown, for more than two millennia, the path to illumination to mankind, and continues to ease the suffering of millions with its universal virtues.

Let us reflect on this occasion, why are the Buddha’s teachings relevant to today’s world more than ever?

The Buddha’s teachings are relevant because they provide us an ideal framework to view and analyse the reality of the world we live in, and to find solutions to our problems by looking at that reality with a right view.

At the United Nations, our efforts are aimed at alleviating human suffering by maintaining world peace, achieving sustainable development, safeguarding human rights and protecting the environment, among others. Buddhist teachings are essentially consonant with these efforts.

The grim reality is that, despite our vehement efforts, our contemporary world has become an increasingly more dangerous place. The world continues to be plagued by violent conflicts, poverty, hunger, and disease.

In these troubled times, humanity is confronted by mutual distrust, increasing isolationism, hatred and violence. Rising tensions and the threat of terrorism and extremism across the globe are threating the security of humankind and its hope for peace.

This situation can be best expounded by the first of the four noble truths taught by the Buddha, that is, the truth of the reality of Dukkha or suffering as part of conditioned existence of mankind. The Buddha’s doctrine helps us to analyse this reality and find the root causes of many problems that the world is facing today.

If we are to delve into the root causes of violent conflicts, rising tensions, mutual distrust and hatred, we could see that they are being created by the actions spurred by wrong view and clouded judgement. We often see that wrong views and clouded judgement are permeating not only the current global political order but also within States themselves, creating tensions and violent conflicts.

As Ven. Bhikkhu Bodhi, who has honoured us with his presence at this event today, once wrote: “In the present-day world, far more than in the ancient Ganges Valley, wrong views have gained widespread currency and assumed more baneful forms than earlier epochs ever could have been imagined.”

No need to say that, in a world where there are military capabilities which could have unimaginable consequences for the very existence of humanity, one wrong view or one wrong decision clouded by prejudice, anger or ignorance would be catastrophic.

The Buddha’s teachings provide us with the remedy for this perilous condition. He propounded Right View or Samma Ditti at the head of the noble eightfold path, the noble path that would lead one to awakening and enlightenment.

Right View is right understanding. It is the vision of the reality not clouded by avarice, wrath or ignorance. To quote Bhikkhu Bodhi again, “the right view is the chisel to be used to cut away the dross of wrong views and confused thoughts that impede the light of wisdom from illuminating our minds.”

In our dealings at the United Nations, and in politics among nations in the present day, right view is a must. If we are to apply the Buddha’s teachings on the right view to our dealings, root causes of mutual distrust, hatred, and tensions could be eliminated, saving millions of lives and easing human suffering.

As United Nations, this is the message that we must seek to propagate.

It has indeed been an honour for us to be a co-sponsor of this year’s Vesak Day celebrations at the United Nations. I thank my colleague His Excellency the Ambassador and Permanent Representative of the Kingdom of Thailand and the organizing committee for joining us in making this meritorious endeavor a success. I respectfully thank Ven. Bhikkhu Bodhi for kindly agreeing to deliver a brief sermon at today’s event. I also thank the group of Sri Lankan children who are here to play a brief musical interlude.