On behalf of the President and Prime Minister, Government and people of Sri Lanka, Minister of Foreign Relations, Skills Development, Employment and Labour Relations Dinesh Gunawardena met the Ambassadors of Arab Countries based in Colombo at the Ministry of Foreign Relations, today, 8 June 2020 and expressed sincere gratitude through them to their respective Arab Governments for the support and solidarity given to the people and Government of Sri Lanka during this unprecedented international situation of the spread of COVID –19. 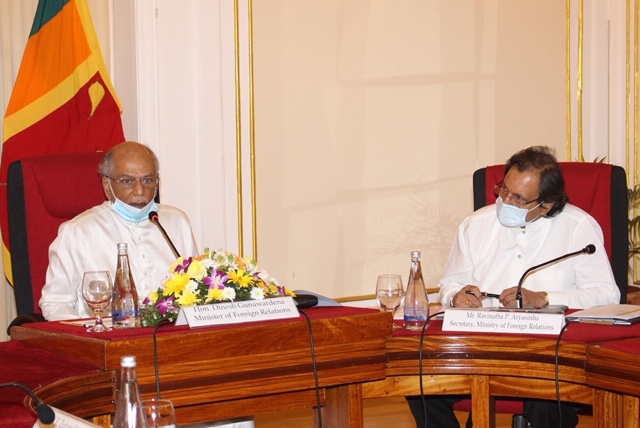 As the largest expatriate community that lives and works in the Middle East, Minister Gunawardena took the opportunity to extend appreciation for the steps taken to look after the health and safety of those Sri Lankans. He said that the Government plans to bring the returnees from the region in a smooth and systematic manner.

Minister Gunawardena further expressed Sri Lanka’s keen interest in enhancing and strengthening economic and trade ties with the Arab world, especially through a Government to Government mechanism. The need to increase the market accessibility for Sri Lankan tea was highlighted by the Minister. He was optimistic that the socio- economic and political relations will be further consolidated following the Parliamentary Elections in Sri Lanka.

Minister Gunawardena emphasized that the Government of Sri Lanka will continue to follow a non-aligned foreign policy. He recalled that Sri Lanka has consistently supported the inalienable rights of the Palestinian people and their right to an independent, sovereign State based on the relevant UN Security Council Resolutions. He added that Sri Lanka’s commitment towards the Palestinian people remains undiminished at all times. 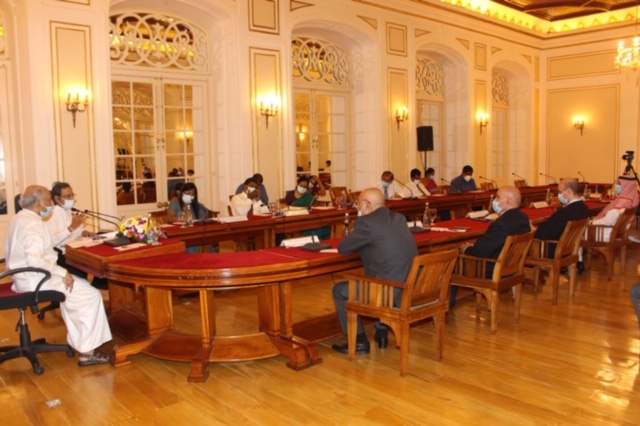 While thanking for the development assistance granted by the Middle East region, such as the Saudi Fund for Development, Minister Gunawardena welcomed such development assistance in future. Secretary of the Ministry of Foreign Relations Ravinatha Aryasinha also elaborated the actions taken by the Government on the smooth return of Sri Lankans. 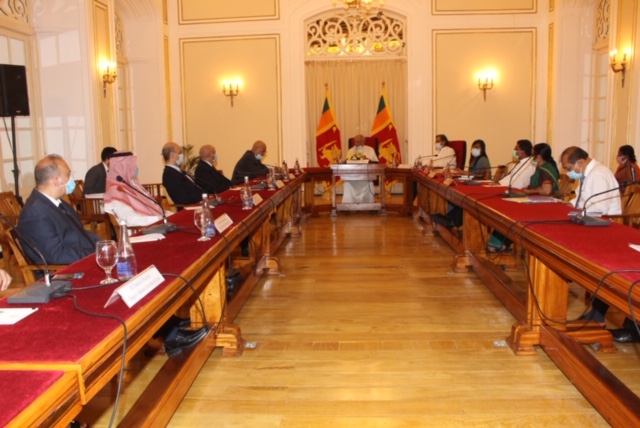 Ambassador Zuhair Hamdallah Zaid of the State of Palestine thanked the Sri Lankan Government for its continuous support for the rights of the Palestinian people and he also recalled Sri Lanka’s excellent relations with the Arab world. Ambassador Khalaf M.M. Bu Dhhair of the State of Kuwait endorsed the need to harness economic and trade ties with the Arab world, through the facilitation of both Governments. Opportunities available in the skilled worker sector was also elaborated.

Ambassador Hussein El Saharty of the Arab Republic of Egypt highlighted that Sri Lankan export commodities to Egypt have increased substantially during the months of April and May despite the fact that the country was in a lockdown situation. Ambassador Abdulnaser H. Al Harthi of the Kingdom of Saudi Arabia assured their fullest support and cooperation for the welfare of the Sri Lankans in the Kingdom. He also highlighted the initiatives taken by the G-20 for the assistance of COVID -19 affected people.

The Charge d’ Affaires, a.i.  Kutaiba Ahmed Alkero,  Hamad Al Buainain, Humaid Al Tamimi  of  the Republic of Iraq,  State of Qatar, the UAE respectively, and  Minister Amar A. M. Muftah of the State of  Libya also attended the meeting.  All representatives assured the Arab world’s fullest cooperation and support for continued excellent relations with Sri Lanka and also in continuing to look after the welfare of Sri Lankans in the gulf region.

Along with Foreign Secretary Ravinatha Aryasinha, senior officials of the Foreign Relations Ministry participated in the discussion.