Sri Lanka actively participated at the Sixty-first Session of the Commission on the Status of Women (CSW) held at the United Nations in New York from 13 – 24 March 2017. The Priority Theme of this year’s CSW61 is ‘Women’s Economic Empowerment in the Changing World of Work.’

The Permanent Mission of Sri Lanka to the United Nations co-hosted three events on the sidelines of 61CSW on the subjects of Women’s Economic Empowerment, the Role of Women in Post Conflict Reconciliation and Maternal Nutrition. 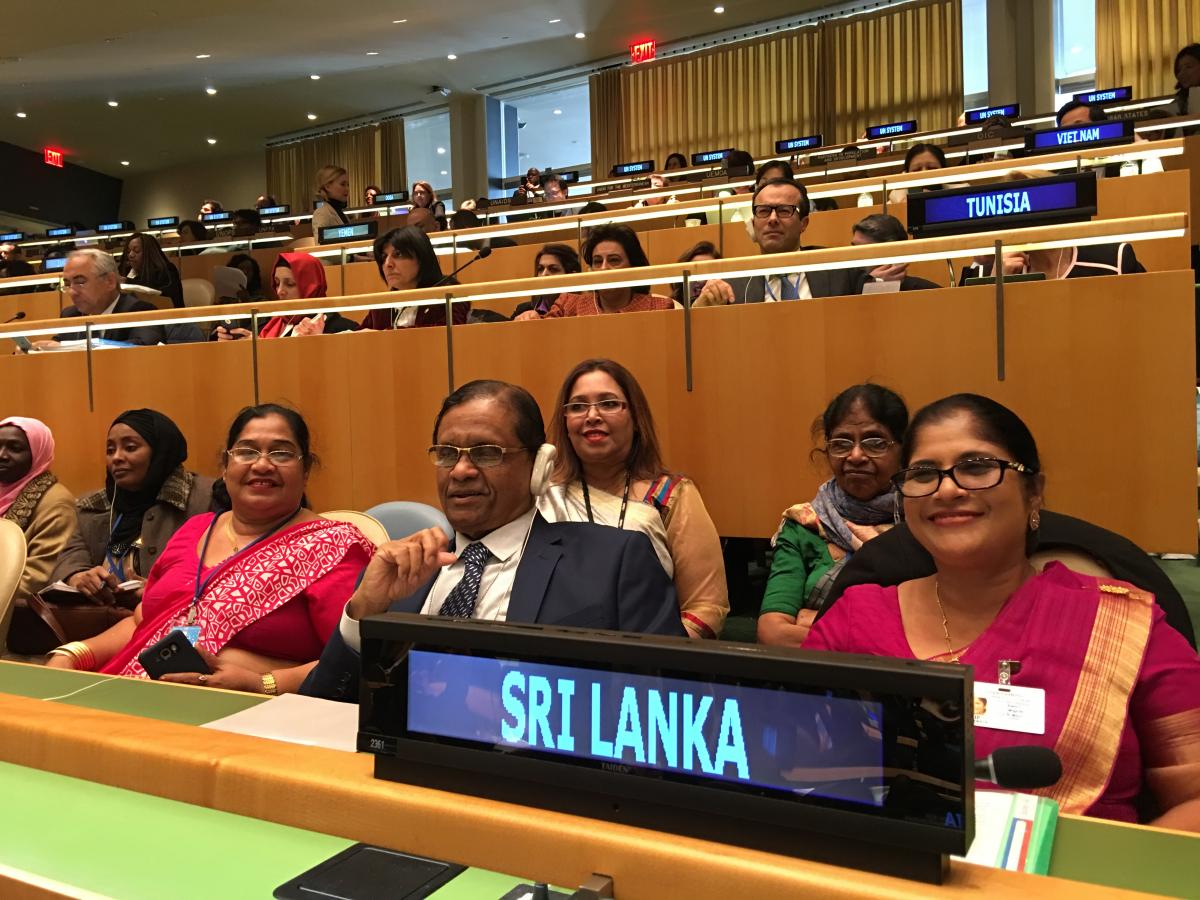 The Sri Lanka delegation, headed by Hon. Chandrani Bandara Jayasingha, Minister of Women and Child Affairs, and H.E. Dr. Rohan Perera, Ambassador & Permanent Representative of Sri Lanka to the UN, attend the opening of the 61st Session of the Commission on the Status of Women

In delivering Sri Lanka’s national Statement on 15 March 2017 Minister Chandrani Bandara said that the Sri Lanka was committed to women’s empowerment and had already taken several steps to address the needs of women including war widows. She noted that a Chapter on Women’s Rights had been included in the National Human Rights Action Plan (2017-2021) to address issues such as law reforms, war affected women, employment, and enhancing institutional mechanisms. She noted that an Independent Commission for Women is expected to be established through the Constitutional Council enabling women to lodge complaints directly to the commission.

Sri Lanka was working towards achieving the gender equality targets enshrined in Goal 5 of the Sustainable Development Goals the Minister also said. In this context she also made reference to the necessity of eradicating rural poverty. (Click here to the Minister’s full statement). 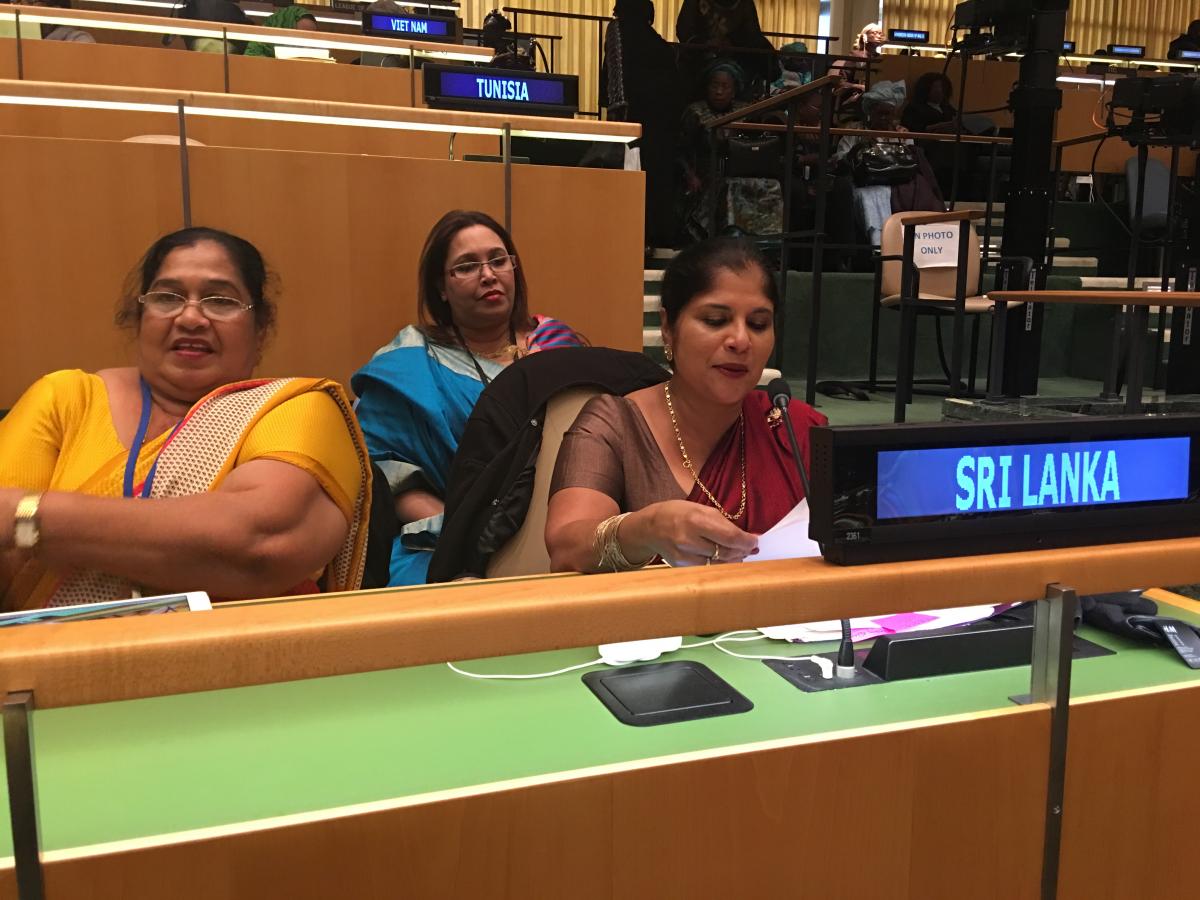 Minister Jayasingha also participated at a roundtable focusing on ‘Informal and non-standard work – what policies can effectively support women’s economic empowerment’ during the High Level Ministerial Segment of CSW61 on the 13th of March 2017. Ms. Jayasingha highlighted the significant contribution of informal sector women to the national economy in addition to their contribution to the well-being of the family, and took note of the situation of unpaid care workers, domestic workers, women’s access to resources, and social protection measures currently n place in Sri Lanka as well as steps to be taken in the future. (Click here to see the minister’s full intervention). 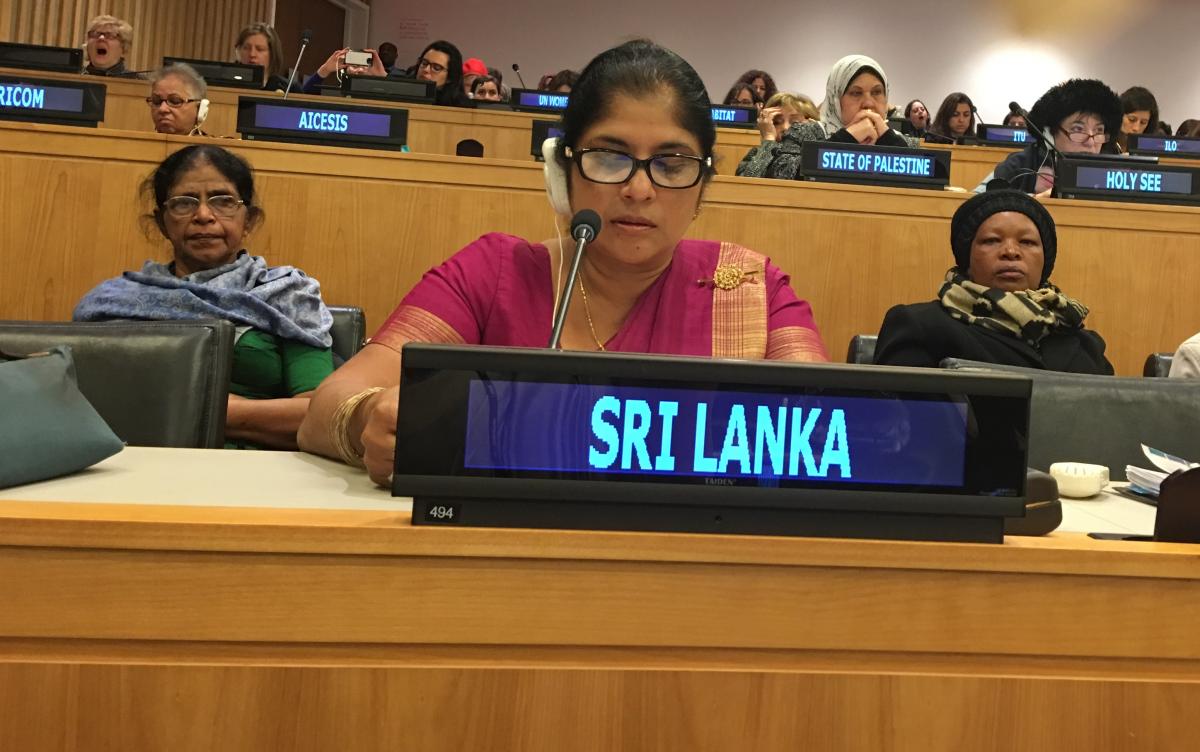 The Minister also held bilateral meetings on the sidelines of the CSW61, with the Minister of Equal Opportunities of Denmark Hon. Ms. Karen Ellemann, and Director/Global Partnership to End Violence Against Children, Dr. Susan Bissell, to discuss matters of mutual interest including the empowerment of women, achieving gender equality and the protection of children. The Sri Lanka delegation led by the Minister also met with Ms. Robin Lerner, Counselor in the Secretary’s Office of Global Women’s Issues of the US State Department. The potential formation of a bilateral Women’s Empowerment Dialogue was discussed during the meeting. Sri Lanka’s Priorities going forward which included women’s economic empowerment, preventing gender based violence, and women’s political empowerment were also highlighted. 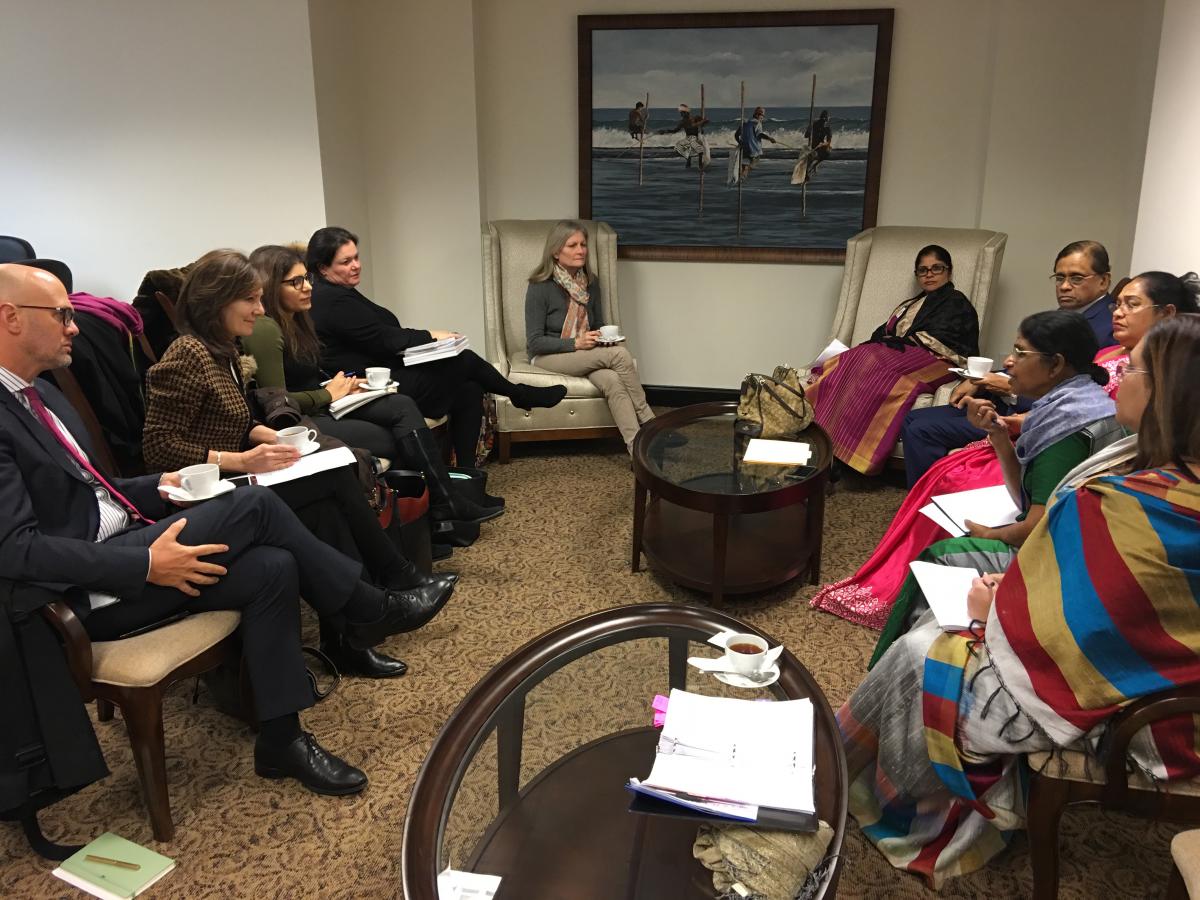 The delegation of Sri Lanka held a bilateral meeting with Dr. Susan Bissell, Director of the Global Partnership to End Violence Against Children, to discuss on matters relating to women’s empowerment and protection of children 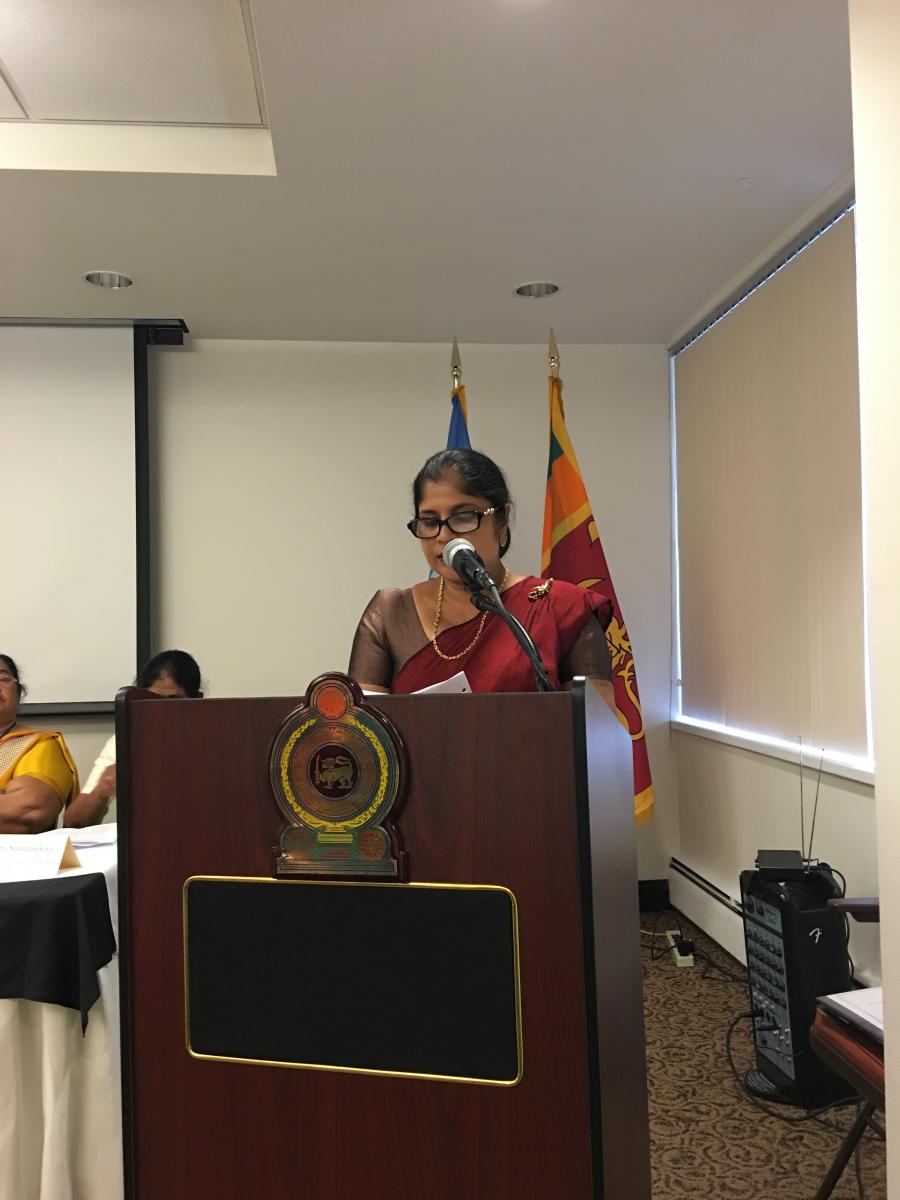 Secretary at the State Department of Kenya for Youth and Gender Affairs in the Ministry of Public Service, Mrs. Zeinab W. Hussein, Eastern Provincial Minister of Women Affairs, Ariyawathy Galappaththy,  Assistant Secretary-General and Deputy Executive Director of UN Women, Dr. Yannick Glemarec , and Chair of the National Committee on Women, Mrs. Swarna Sumanasekera. The seminar drew a wide range of participants from the diplomatic sector, the Sri Lankan expatriate community and civil society advocates in New York. Ambassador Dr. Rohan Perera in his welcome address stated that Sri Lanka has embarked on a transformative process of economic recovery. “We recognize that the conflict has had a disproportionate impact on women’s physical and economic security. The post-conflict environment places a heavy financial care and burden on women. We are aware that the long drawn out conflict has resulted in a large number of victims - orphans, war widows, single mothers and women headed households” he noted.

Minister Chandrani Bandara in her opening remarks noted that entrepreneurship development is one of the key programs conducted in Sri Lanka for empowering rural women, and highlighted that the Women’s Bureau of the Ministry of Women and Child Affairs is a major contributor for providing micro credit facilities for women. She referred to steps undertaken to assist war widows and women in former conflict areas and said her Ministry’s Action Plan for Female Headed Households and the focus of the Office of National Unity and Reconciliation (ONUR) on two of the priority areas identified by UN Women – Personal Security and Economic Empowerment and Livelihoods, have been designed to address some of the challenges faced by these women.

Means of stimulating and promoting economic growth through the promotion of entrepreneurship and innovation, particularly by young women, as well as practical methods to enhance business opportunities were discussed. The panel discussion was followed by a lively Q and A session. 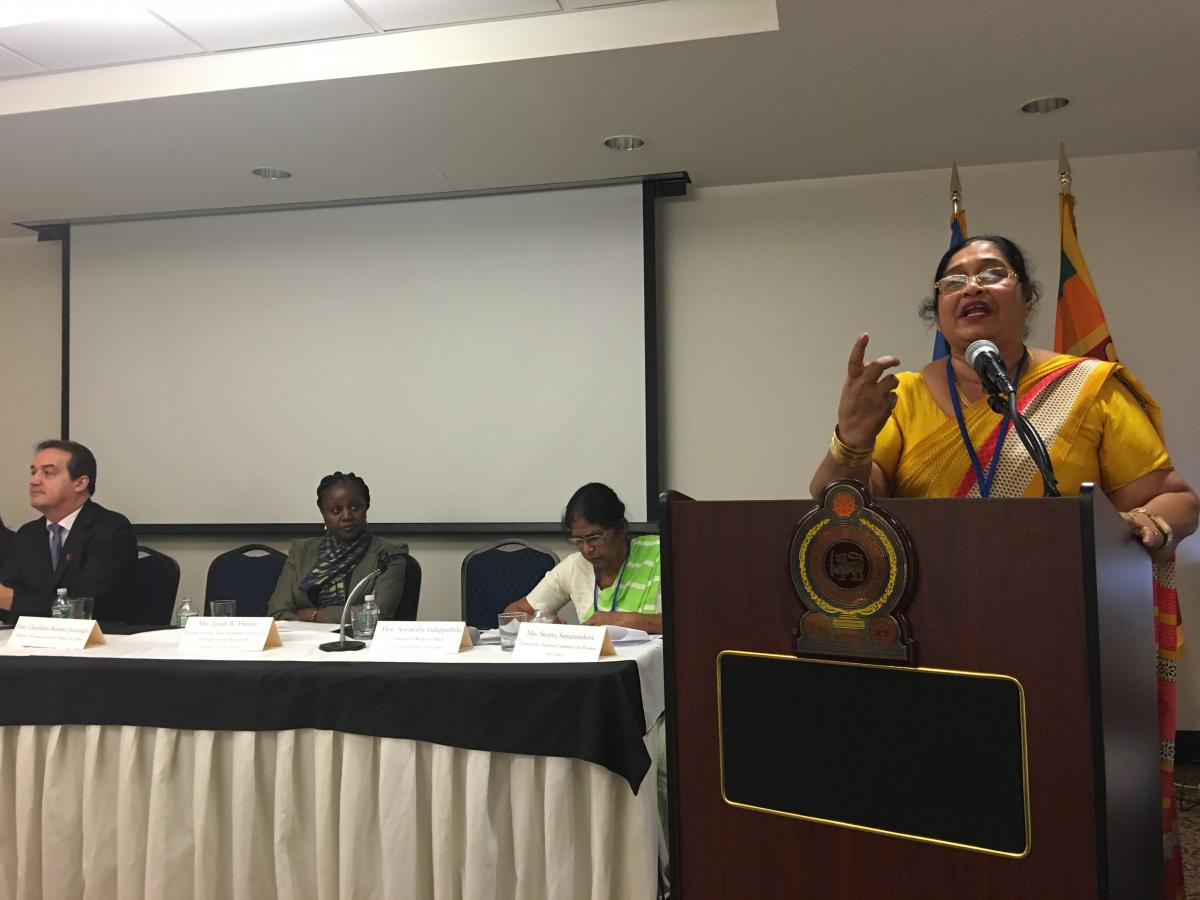 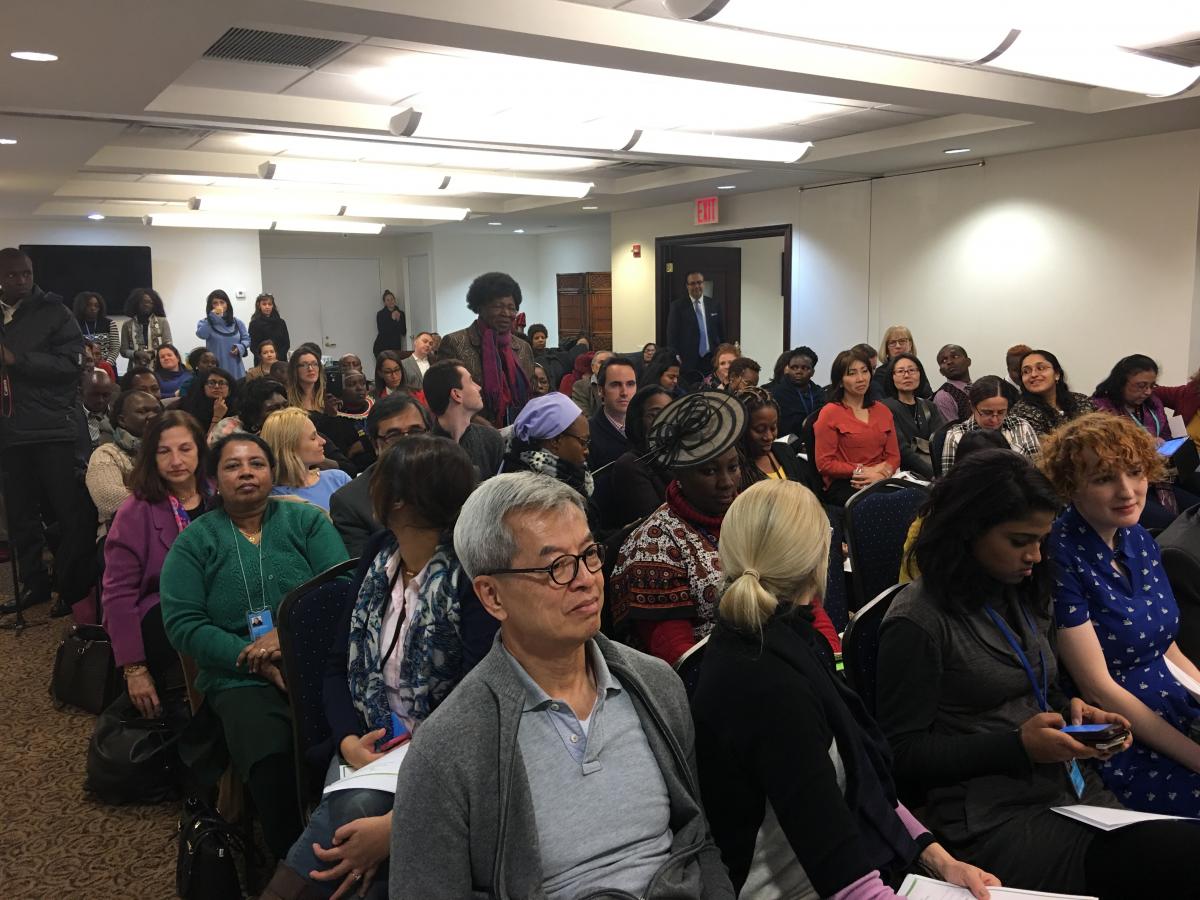 The audience at the side event on ‘Women Entrepreneurs: Empowering Women’s Economic Leadership’ 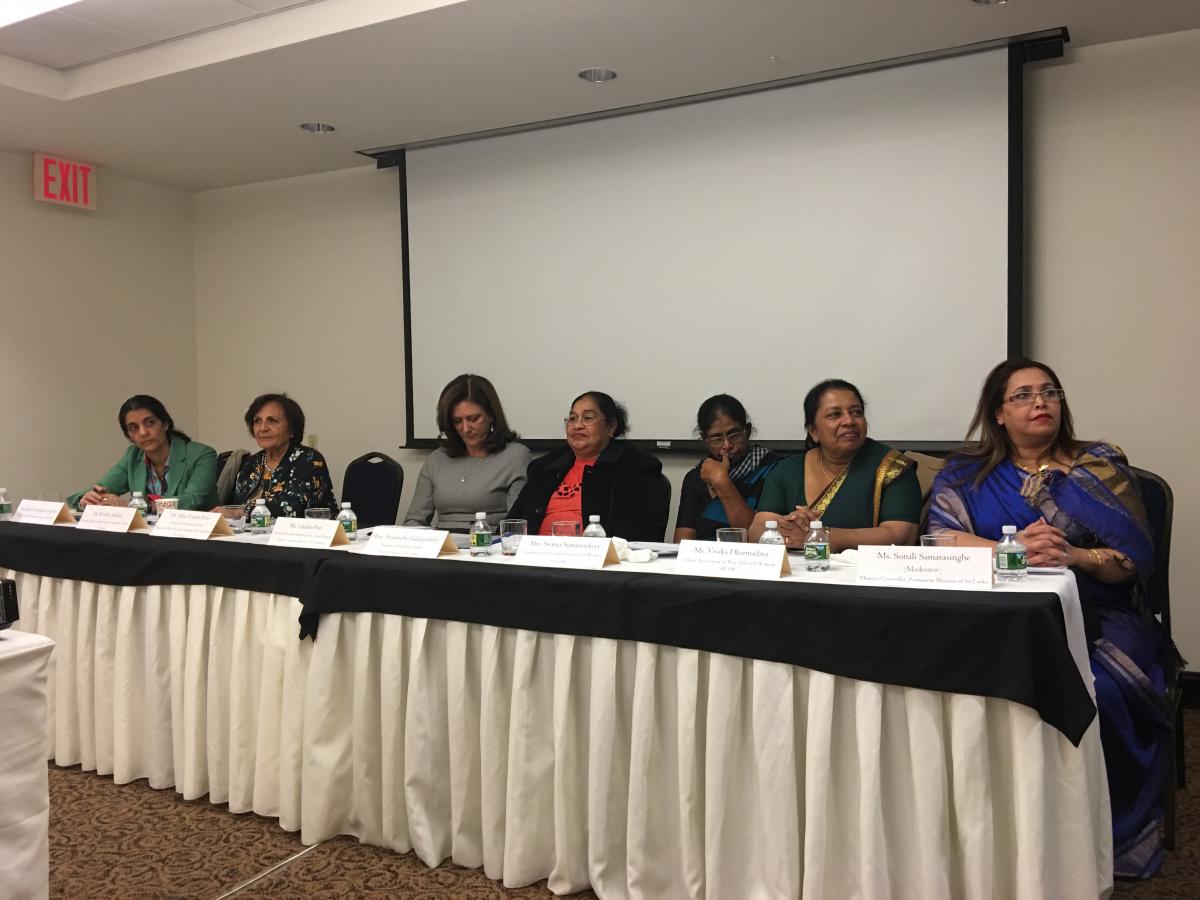 The panel at the side event on ‘Post-Conflict Reconciliation - The Road to Reconciliation: Justice, Hope and Dignity in Sri Lanka’ held on 16th March 2017

In his welcome address H.E. Dr. Rohan Perera, Permanent Representative of Sri Lanka said that the role of women in reconciliation is vital given that women constitute a majority of the population - 52 percent. In the direct conflict affected areas, the percentage is even higher, the Ambassador noted.

Panelists from Colombia and Tunisia spoke about their experiences and drew from the lessons of international best practices. There was a special interest in the audience on Sri Lanka’s efforts in reconciliation. A vigorous Q and A followed the debate where several members of the diaspora expressed their willingness to work together with the Sri Lankan government. 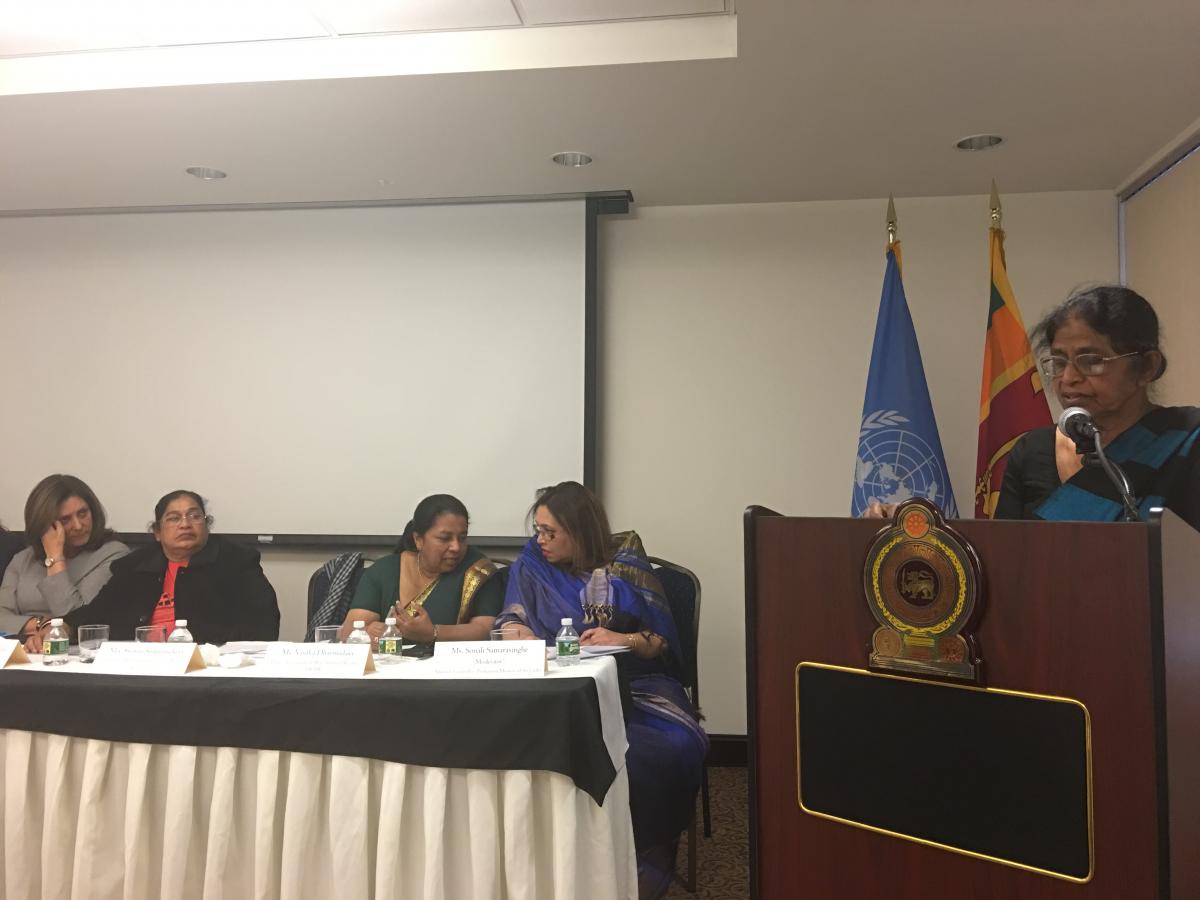 Mrs. Swarna Sumanasekera, Chairperson of the National Committee on Women, makes her observations at the side event on Post-Conflict Reconciliation on 16th March 2017

A panel discussion titled ‘Women and Labour: A nutritional perspective’ co-hosted by Sri Lanka, Argentina and Indonesia, in collaboration with FAO, UNICEF, UN Women, WHO and the World Bank, will be held on 20th March 2017 at the UN Headquarters, and will look at country examples of investing in maternal nutrition for women’s empowerment.