“Public have a fundamental right to be protected from terrorism”- Statement by H.E. Mohan Peiris, Permanent Representative of Sri Lanka to the UN at the Consultations on the Seventh Biennial Review of the United Nations Global Counter-Terrorism Strategy 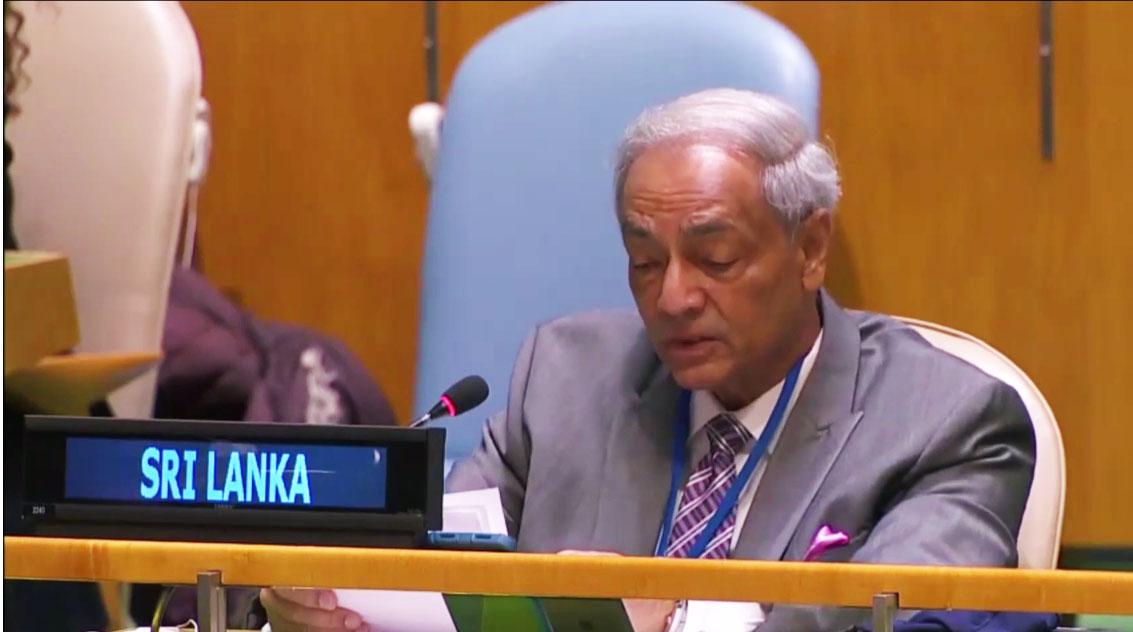 I thank the Permanent Representatives of Spain and Oman for the fine role that they are playing as co-facilitators of the Seventh Review of the Global Counter-Terrorism Strategy. I also wish to thank the United Nations Under-Secretary-General of the UN Office of Counter-Terrorism for the presentation on the comprehensive Report by the UN Secretary-General on the activities of the UN system in implementing the Strategy.

As we gather here today, in this Assembly Hall, and deliberate on this most important subject, I was wondering how many amongst us, would have personally experienced in some form or another the real horrible effects of terrorism. Some of us may have experienced it more than others. For some of our fellow citizens back at home, at one point in time it may have even become a way of life, as it might be the case even today for some of our Member States. The fear of getting on a public transport to get to work, the fear of sending your child to school, anxiously waiting for your loved ones to return home safely, the ability to go about your daily work without fear or anxiety is common in certain parts of our world, even as we speak.

Mr. President, when your fellow citizens are unable to lead their lives without the guarantee of their most fundamental rights, what is a responsible government constitutionally mandated to do? How should it respond? This was the dilemma facing the Government of Sri Lanka. For nearly 30 years we tried a cocktail of mechanisms from peace talks to ceasefires with the aid of our interlocutors, however the high price, to bring the group of non-state actors responsible for their extremely brutal terror tactics to the table, into the democratic fold. Regrettably all these efforts did not work. Innocent men, women and children continued to be terrorized, lost their lives and we witnessed the loss of public assets. Their distorted ideologies continued to incite hatred along ethnic lines even as I speak sitting in the comfort of jurisdictions outside. Finally, the Government had no choice but to carry out the humanitarian operation in 2009 that finally liberated the people of Sri Lanka from the clutches of that group of non-state actors.

Mr. President, Sri Lanka has come a long way since those dark days. If you really think about it, it is somewhat surprising that for a country that had borne the brunt of nearly 03 decades of terrorism, we are where we are today. There is peace in the country. It is a success story. Ironically there is amongst us those who find peace an inconvenient environment. Peace is anathema to their geopolitical aspirations which are played out through the pawns of terror namely Non State Actors. We see today that by a far more sophisticated machinations terrorists have gained access to our governments, civil society organizations, private sector entities, religious organizations, the judiciary and the entire canvas of human activity. However democracy prevails. No doubt challenges remain. However, we remain confident that with the resilience of the Sri Lankan people and the strong leadership of the Government supported, by the United Nations, we will continue to address these challenges having due respect for the rule of law and Human Rights.

These terror groups are so powerful today that they have the power to move the very international organizations we represent today, to use our own mechanisms such as our Human Rights mechanisms, to neutralize our continued fight against terror. They know that we have humane hearts. But we cannot allow such humanity to be abused to create nurseries for terrorists and extremists. We cannot be seen to be hunting with the hound and running with the hare. Our message to terror must be loud and clear. The message must clearly be zero-tolerance and that our commitment to Human Rights is not an opportunity to vindicate the programs of terror structured conveniently on the basis of a political agenda.

This morning, I heard the laudable observation that we will respond to terror taking due cognizance of Human Rights. An absolutely sacred and fine principle to adopt. It will however be most welcome if the Counter-Terrorism Strategy would recommend to this assembly the guiding principles by which Member States could respond in achieving this fine balance by which the fight against terror and the respect for human rights can subsist in the context of the observation by the Hon. Lord David Blunkett, a former Minister of the British Government, when he told the British Parliament that the Public have a fundamental right to be protected from terrorism. A case by case basis which can be a convenience basis might be suggestive of a timid, compromised response. It is these measured diplomatic messages that terrorists and their likeminded cohorts find encouraging. Mr. President, be assured that Sri Lanka is committed to a Counter-Terrorism Strategy locally and globally, without losing control of constitutionalism.

Mr. President, we note the UN Secretary-General’s comprehensive Report on the ‘Activities of the United Nations system in implementing the United Nations Global Counter-Terrorism Strategy’ and find it comforting when the Secretary-General observes that ‘multilateralism and international solidarity are essential to fighting terrorism.’ We fully concur with the notion that the fight against terrorism cannot be effectively engaged by any nation on its own. Its tentacles transcend borders and we can only hope to keep up with its evolution and manifestations. Sri Lanka remains concerned that the face of terrorism has now taken a different appearance as observed a few minutes ago. The basic principles of humanity are being exploited by terrorist groups, using ordinary people, to further their distorted ideologies. They have now evolved their outreach mechanisms to infiltrate our institutions using the very values that we hold sacred. We are all aware of this. We are all aware of the dangers that it poses. We implore on our friends in the global community to unequivocally reject any type of aggression that leads to terror. A zero-tolerance for any unlawful activity is required. Take every measure to neutralize any act of terror or any act that has the potential to support terror. Otherwise, it will only serve to deter us from our goal of eradicating this threat, and will destabilize the institutions that we have built on mutual trust and respect.

I take this opportunity to extend to my colleagues, the Ambassadors of Spain and Oman, the full cooperation of my delegation as they steer these important discussions in the coming days. Mr. President, Sri Lanka condemns terrorism and violent extremism conducive to terrorism, in all its forms and manifestations and will continue to play its role in the international community to find innovative and pragmatic solutions for the betterment of our people.