H.E. Mr. Peter Thomson, President of the General Assembly, in delivering the opening statement at the opening segment of the event, noted that “Investing in young people, and realizing the demographic dividend, is one of the most effective, long-term and exponential investments Governments can make to achieve the 2030 Agenda and realize a future that is safe, secure and prosperous for all."

Ms. Maria Luiza Ribeiro Viotti, Chef d’ Cabinet while making a statement on behalf of the  UN Secretary-General António Guterres said, “Young people are some of the greatest change-makers and innovators we have. We must help young women and men to achieve their potential not only for their own sake, but for all of us, and our communities and societies.”

The Permanent Representative of Sri Lanka to the United Nations, H.E. Dr. Rohan Perera, addressing the opening session of the event, said that the world has witnessed a rapid change in the patterns of employment and related technologies. He underlined that on the one hand the world is experiencing a rapid expansion of technologies such as ‘automation’ which aims at decreasing human labour but on the other, the economists are calling for the creation of new employment opportunities. While pointing out that this dilemma underlines the importance of preparing for the future, he expressed that the need of the hour is managing the transition in the economy and the society in a holistic manner, carefully balancing the contending interests involved. He underlined the need of balanced development strategies which effectively integrate technology, innovation with job creation and capacity building, avoiding the pitfall of ‘technological unemployment’ and maximising the opportunities that technological innovation, presents. His full statement can be found below.

Ms. Jayathma Wickramanayake, the newly appointed Secretary General’s Envoy on Youth made her maiden public intervention at this event. She underlined that “With the 2030 Agenda, Member States have committed to substantially increase the number of youth who have relevant skills, including technical and vocational skills, for employment, decent jobs and entrepreneurship. They recognized that without skilled and employable young people, our chances of achieving the Goals are greatly diminished.  It is time to take that commitment seriously.”

The opening session was followed by a high level Ministerial roundtable discussion moderated by ILO. H.E. Kristian Jensen, Minister of Finance of Denmark, H.E. Imad Fakhoury, Minister of Planning and International Cooperation of Jordan and Hon. Karunarathna Paranawithana, Deputy Minister of Skills Development and Vocational Training of Sri Lanka were panelists of this discussion.

During the general discussion, Ms. Susan Schorr, Head of the Digital Inclusion Division of the International Telecommunication Union referred to Sri Lanka as a model in using digital technologies to empower young women and elaborated on the ongoing cooperation between the GoSL and the ITU.

Ms. Brandee McHale, President of the Citi Foundation, Ms. Jiwon Park of Major Group on Children and Youth and representatives of the Member States, Youth Representatives, UN entities, trade union, education, civil society, and private sector, representing the cross-cutting levels of labour which all play an integral role in skills development also expressed their views on the skills which are needed in the future which lead to a robust exchange of views.

The event was webcasted live on UN Web TV. 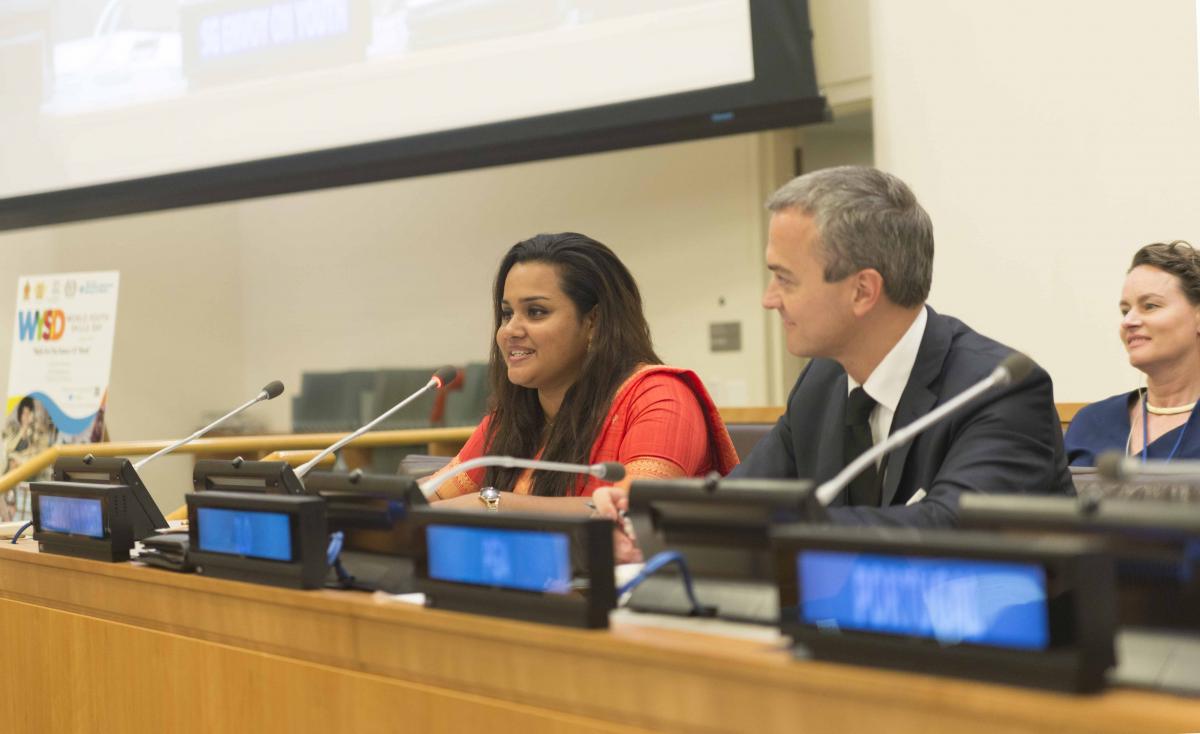 Statement made by H.E Dr. Rohan Perera, Permanent Representative of Sri Lanka to the UN at the ‘World Youth Skills Day’ 2017.

“Skills for the future of work”

Let me first extend my sincere appreciation to the co-hosts of this event, Ambassador Moura and the Permanent Mission of Portugal, UNESCO, ILO and the Office of the Secretary General’s Envoy on youth in organizing this event.

This is the third consecutive year that we are celebrating the World Youth Skills Day and it is a matter of great satisfaction to look back and see the distance that we have covered during this relatively short period of three years. Today the World Youth Skills Day has become one of the key events concerning youth which is being celebrated both in the UN headquarters as well as around the globe. We all should take pride in what we have achieved, so far, in drawing attention of the world to the importance of youth skills development, through this universally recognized UN day.

This year’s Skills Day event is also special as this would be the first public event Ms. Jayathma Wickramanayake, the newly appointed Secretary General’s envoy on youth is participating. She is a youth from Sri Lanka, who was active as a youth delegate, representing the global south. Her appointment, undoubtedly, would inspire generations of young female leaders across the globe.  I take this opportunity to extend a very warm welcome to her and wish her all success in her endeavours.

We are discussing today is the theme of “Skills for the future of work”. This is a topic which is most timely and of universal significance. The nature of work in future and different skills that are needed to secure the full potential of these work opportunities are key issues that most of the young people in the world are concerned with. It is no doubt that this topic touches all our minds each passing day.

Over the past decade, we have witnessed a rapid change in the patterns of employment and related technologies. A decade ago, we were not familiar with online mega stores, app based services, self driving vehicles or 3D printing which could ‘print’ objects within minutes.  For many those were merely ideas of futurologists. But in less than a decade, those ideas turned into realities and are directly shaping the work and life patterns of all.

Wide-Spread automation presents both challenges and opportunities. The World Bank, in a study published last February, noted that ‘automation’, such as self driving cars, has become the most rapidly expanding and sought after technologies at present. More and more investments are flowing to expand the technologies related to automation.

In contrast to this reality, the Davos Wold Economic Forum during its Annual meetings in a 2017 came up with a report titled ‘Employment, Skills and Workforce Strategy for the Fourth Industrial Revolution’ which envisaged that nearly 500 million new jobs are needed to be created by 2020 to provide opportunities to those currently unemployed and to the young people who are projected to join the workforce over the next few years.

This juxtaposition is the current dilemma confronting us all. On one hand we experience a rapid expansion of technologies such as ‘automation’ which aims at decreasing human labour but on the other the economists are calling for the creation of new employment opportunities.

This dilemma underlines the importance of preparing for the future and managing the transition in the economy and the society in a holistic manner, carefully balancing the contending interests involved. It calls for balanced development strategies which effectively integrate technology, innovation with job creation and capacity building, avoiding the pitfall of ‘technological unemployment’ and maximising the opportunities that technological innovation, presents.

I firmly believe that, to face this challenge, what we need at this hour is a ‘skills revolution’ in which young people rapidly adapt to the fast-changing world of work by acquiring necessary skills.  These skills are not the skills that we had discussed a decade ago, but an array of new skills including ‘digital skill’.

To prepare young people to lead this skills revolution, a systemic change in education and training, re-examination of our educational systems and labour policies and a proper forecasting of industry and labour-market becomes imperative.

We need to be mindful that we are entering into a world with more flexible, more freelanced, more collaborative and far less secure work environments.

Therefore, I believe that the shape of ‘future of work’ is very clearly appearing before us and in fact the future is now. What we all have to do is to prepare for it acquiring and arming our youth with appropriate skills, as soon as possible.

The distinguished expert panel that we have with us today will no doubt focus in depth on the need to acquire ‘digital skills’.

Before I conclude, Ladies and Gentlemen permit me to say that, I have been privileged to co-chair the World Youth Skills Day commemoration for the past three years with Permanent Representative of Portugal, H.E. Mr. Álvaro Mendonça e Moura who will be ending his tour of duty in New York very soon. I take this opportunity to extend my deep appreciation to him for the support that he has extended to all of us in organizing the World Youth Skills Day at the UN. While wishing him all success in his future endeavours, I’ am confident that his successor would share his enthusiasm and commitment in supporting the Youth agenda.

I thank you Excellencies, Ladies and Gentlemen.