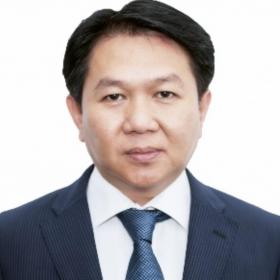 H.E. Mr. Anouparb Vongnorkeo
Ambassador Extraordinary and Plenipotentiary and Permanent Representative of the Lao PDR to the United Nations.

Ambassador Anouparb Vongnorkeo is the 8th Permanent Representative of the Lao PDR to the United Nations. He assumed his current role on January 28, 2020, after being designated Permanent Representative by the President of the Lao PDR earlier in September 2019. During his first term in New York, he has served as Vice President of the 76th Session of the General Assembly of the United Nations, the second Lao Ambassador to assume this position. He has successfully orchestrated the Lao PDR’s historic campaign for membership of the Economic and Social Council of the United Nations (ECOSOC) for the term 2023-2025 and becomes the first Lao Ambassador to serve in the Council.

Prior to this appointment, Ambassador Anouparb was Director-General of the Department of International Organizations in the Ministry of Foreign Affairs from 2016 to 2019.

During his 24 years of diplomatic career, Ambassador Anouparb held various senior positions in the Government of the Lao PDR and the Ministry of Foreign Affairs, including among others, Deputy Director-General of the Department of International Organizations (2011 to 2016), Director of the United Nations Division (2007-2011), having served as Deputy Director (2005-2006).

Throughout his career, Ambassador Anouparb also served as senior interpreter for Lao Government leaders over the past 16 years and was member of the secretariat of former Deputy Prime Minister and Minister of Foreign Affairs (from 2006 to 2017), during which he travelled extensively to different countries across all continents and participated in several major international conferences and summit meetings. Before joining Foreign Service, he briefly worked at UNDP country office and banking sector in Vientiane.

Ambassador Anouparb has over 20 years of dynamic experiences working with different actors, including Government, International Organizations, Regional Organizations, Civil Society and Private Sector, engaging in a wide array of global and regional issues, on a multilateral and bilateral level. He has actively involved in accession process of the Lao PDR to the World Trade Organization, the Paris Agreement on Climate Change, and the UN Convention on Cluster Munitions, among others.

Ambassador Anouparb has played an instrumental role in positioning the Lao PDR as the second signatory of the Convention on Cluster Munitions (CCM) in Oslo in 2008, the first 30 ratifications to trigger the Convention’s entry into force in 2010, and successful hosting of the Convention’s First Meeting of States Parties (MSP) in Vientiane in 2010. Ambassador Anouparb was also among key pioneers in localizing the internationally agreed development goals, including the MDGs and SDGs, into Lao PDR’s national development goals which has led to the adoption of the national MDG9 and SDG18 entitled “Lives Safe from Unexploded Ordnances (UXO).”

Ambassador Anouparb has a deep knowledge of the sustainable development agenda and has extensive experiences leading the Lao PDR delegation’s active participation in the intergovernmental negotiations on various issues related to Agenda 2030, the UN Programs of Action on Least Developed Countries (LDCs) and Landlocked Developing Countries (LLDCs). He closely engaged and oversaw the preparations of all National MDG/SDG Reports as well as formulation of Lao-UN Cooperation Frameworks and INGOs Legislations throughout his tenure at Lao PDR’s Foreign Ministry.

Ambassador Anouparb has long devoted to voluntary and humanitarian work, including serving as Secretary of the Executive Committee of Foreign Ministry’s Youth Union, Deputy Head of the National Secretariat on Anti-human Trafficking, board member of National Regulatory Authority on Unexploded Ordnances (UXO), member of National Committee for Disaster Emergency Relief and Response, Deputy Head of the National Secretariat on Aid Effectiveness, and the Roundtable Meeting Process, among others.

Having been among the first few Fulbright Scholars from the Lao PDR in the United States,

Ambassador Anouparb was awarded M.A in International Affairs from Ohio University in 1998. He holds a B.A in Pedagogy (with Honors) from Vientiane Pedagogical University. Born in December 1973 in the northern patriotic town of Viengxay, Huaphan Province, he enjoys playing sports especially soccer, golf and travel.