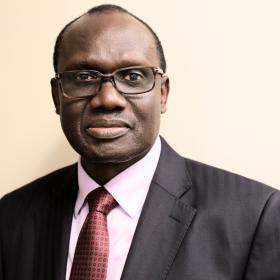 H.E Mr. Lazarus O. Amayo, Ambassador/Permanent Representative of the Republic of Kenya to the United Nations has held several senior public positions before his current assignment among them; the Director for Europe and Commonwealth Division at the Ministry of Foreign Affairs and International Trade, High Commissioner of Kenya to the United Kingdom, Zambia and India with concurrent accreditation to Malawi, Sri Lanka, Bangladesh and Singapore. He also served as the Permanent Representative of Kenya to COMESA, International Maritime Organization (IMO) and the Commonwealth, Ag. Permanent Secretary, Ministry of Foreign Affairs; Director of Administration and Head of International Organizations and Conferences (Multilateral Relations) Division in the same Ministry.

Prior to his diplomatic service, Ambassador Amayo served as Chief Executive Officer (CEO)/Managing Director of Catering Levy Trustees (a parastatal in Kenya). He was elected as a Member of Parliament for Karachuonyo Constituency in the Kenya National Assembly (6th Parliament 1989-1992) and appointed an assistant Minister, Ministry of Education during the same period. He also worked as Human Resource Manager with the Kenya Posts and Telecommunications Corporation.

He holds a Master of Arts degree (MA) in Political Science from the University of Delhi and Bachelor of Liberal Arts degree from Spicer Memorial College in India.

He is a member of the Kenya Institute of Management (MKIM), and Member of Commonwealth Parliamentary Association (CPA). H.E Mr. Amayo has widely travelled and represented Kenya in many regional and international conferences. He is married and has three children. He enjoys reading, tennis and chess.